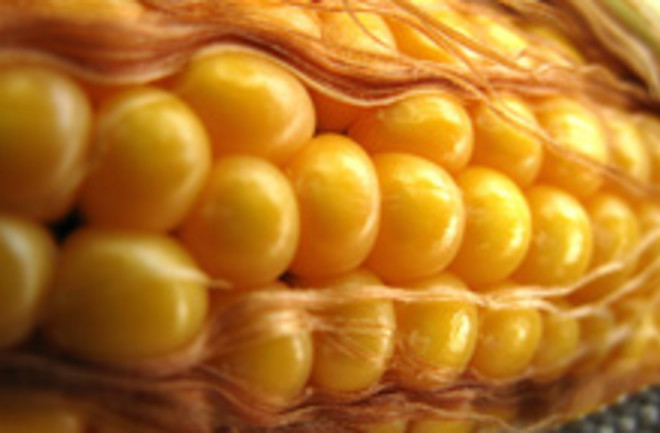 A new genetically modified (GM) corn that produces beta carotene and precursors of vitamin C and folic acid is the first crop to be engineered to make more than one vitamin. Says lead researcher Paul Christou: "The major message of the paper is that it’s possible to engineer crops with multiple nutrients.... If you look at other nutritionally enhanced GM crops, up until now people have only been able to increase levels of one nutrient or vitamin” [Wired]. But anti-GM campaigners have not been won over by the scientific feat, even though the research behind it was not funded by agricultural corporations. The researchers

[Los Angeles Times]. They then bombarded the corn embryos with metal particles coated with chunks of DNA that, if taken up by the embryo, would alter its internal biochemical processes to make it produce the vitamins [BBC]. Follow-up analysis of plants grown from the modified seeds showed not only their successful manipulation, but that the changes lasted several generations. The changes amounted to a 169-fold increase in beta carotene, a precursor of vitamin A. The corn also has six times the normal amount of vitamin C and double the usual level of folate [Los Angeles Times]. The corn hasn't yet been tested for public consumption, and application in the field could take up to ten years. The lag wouldn't necessarily be bad news for people who are opposed to the genetic modification of food, who worry that it will be difficult to contain GM crops and to be sure that all the people eating them were getting the correct dose of what they had been modified to make [BBC]. Christou notes that the research described in the study, published in the Proceedings of the National Academy of Sciences,was funded entirely by public sources. "Our research is humanitarian in nature and targets impoverished people in developing countries" [BBC], he says. But activists point out that fortifying a food does not increase its accessibility, and argue that "golden rice" engineered to have a high dose of vitamin A is still not widely available. One campaigner says that "research efforts would be better placed ensuring that people are able to grow, or otherwise have access to, a diverse range of foods that will give many other health benefits" [BBC]. Related Content: DISCOVER: Genetically Altered Corn tells how a corn not intended for humans got into the food supply 80beats: Will Europe Give in to Genetically Modified Foods? 80beats: Germany Joins the European Mutiny Over Genetically Modified Crops