Researchers piece together the stories of the smallest ancient laborers. 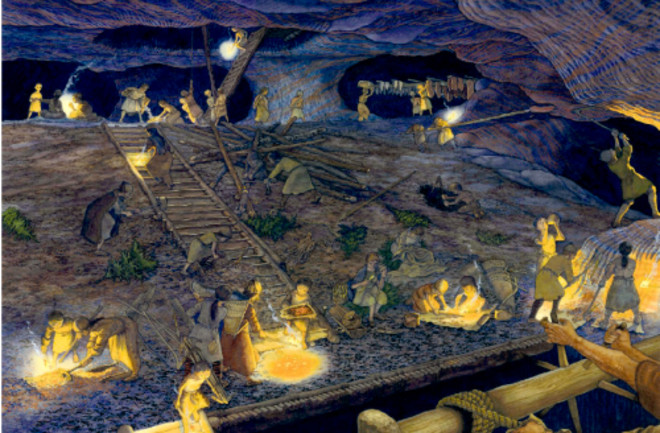 This artist’s rendering shows a snapshot of what life may have been like in the Hallstatt salt mine during the Bronze Age. (Credit: D. Gröbner & H. Reschreiter/NHM Vienna)

This story appears in the June 2020 issue as "More Than Child's Play." Subscribe to Discover magazine for more stories like this.

The tattered leather slipper would have fit a child under the age of 10. Well preserved for footwear nearly 3,000 years old, it was discovered decades ago in the Hallstatt salt mine. Together with other small shoes and woolen and leather caps, also found deep beneath the Austrian Alps in the mine’s tunnels, the slipper would provide archaeologists with a key clue to life in Hallstatt during the Bronze and Iron ages, 2,600 to 3,000 years ago.

“We must conclude … children were regularly and in large numbers employed for underground mining,” wrote Fritz Eckart Barth, the archaeological site’s director in 1992, when the slipper was analyzed.

In the years since the shoes and caps spurred investigations at Hallstatt, scientists have assembled a vivid picture of the child laborers’ lives based on artifacts and bones. Wear and tear on their skeletons, in particular, suggests the youngest miners performed specific tasks at the site.

The research stands out as a rare case of reconstructing the lives of ancient children. Although scientists have found fossils of juveniles spanning prehistory, they’ve mostly studied physical traits, like height and brain size. Few studies have re-created everyday experiences — how kids played, learned and labored.

As a subject of scientific inquiry, “the archaeology of childhood is quite recent,” says Queen’s University Belfast researcher Mélie Le Roy. Archaeologists at Hallstatt and elsewhere are just beginning to uncover children’s contributions to ancient societies.

The salt mine in Halstatt where the artifacts were found. (Credit: D. Brandner/NHM Vienna;)

Home to about 800 people, the modern village of Hallstatt perches between a shimmering lake and pine-covered slopes (and is rumored by some to be the inspiration for the town in Disney’s Frozen). As Hans Reschreiter, an archaeologist at Natural History Museum Vienna, puts it: “If you’re in Hallstatt, you only see a marvelous landscape.” Few visitors realize that some 30 stories underground are the ancient salt mines, a “very, very, very special prehistoric site.”

Mining there began at least 7,000 years ago and continues modestly today. That makes the UNESCO World Heritage site “the oldest industrial landscape in the world [that’s] still producing,” says Reschreiter, who has led excavations at Hallstatt for nearly two decades.

A child's shoe found in the salt mine in Hallstatt. (Credit: A. Rausch/NHM Vienna)

But the mine’s peak was during the Bronze and Iron ages, when salt’s sky-high value made Hallstatt one of Europe’s wealthiest communities. Archaeologists understand a great deal about operations then, thanks to an extraordinary hoard of artifacts including leather sacks, food scraps, human feces and millions of used torches.

Many of the finds are made of perishable materials that are usually quick to decay. They survived in the mine’s tunnels because salt is a preservative — the very reason it was in such high demand during Hallstatt’s heyday.

Among the artifacts, the small shoes and caps showed children were in the mine. But researchers needed more evidence to determine whether the young ones were merely tagging along with working parents or actually mining.

To understand the children’s roles, Austrian Academy of Sciences anthropologist Doris Pany-Kucera turned to their graves. In a study of 99 adults from Hallstatt’s cemetery, she found skeletal markers of muscle strain and injury, suggesting many villagers performed hard labor — some from an early age.

This artist’s rendering shows a snapshot of what life may have been like in the Hallstatt salt mine during the Bronze Age. (Credit: D. Gröbner & H. Reschreiter/NHM Vienna)

Then, in 2019, she reported her analysis of the remains of 15 children and teenagers, finding signs of repetitive work. Children as young as 6 suffered arthritis of the elbow, knee and spine. Several had fractured skulls or were missing bits of bone, snapped from a joint under severe strain. Vertebrae were worn or compressed on all individuals.

Combining clues from the Hallstatt bones and artifacts, researchers traced the children’s possible contributions to the salt industry. They believe the youngest children — 3- to 4-year-olds — may have held the torches necessary for light. By age 8, kids likely assumed hauling and crawling duties, carrying supplies atop their heads or shimmying through crevices too narrow for grown-ups. Surviving shoes provided additional details about their labor: Wear patterns along the midsole suggest frequent ladder and stair climbing.

“The people had to work a lot, but they also profited,” says Pany-Kucera. Villagers young and old were buried with fine items, including amber beads, bronze rings and imports from the Mediterranean and Baltic regions. Based on analysis of remains from the cemetery, the life expectancy of Hallstatt’s citizens was typical for that period.

It’s no surprise that the young labored at Hallstatt. Children are, and always have been, essential contributors to community and family work. A childhood of play and formal education is a relatively modern concept that even today exists mostly in wealthy societies.

But archaeological evidence for child labor has been difficult to find. “Most of the children are missing from the archaeological record,” says Le Roy. There are several reasons for this gap: Among them, children’s smaller bones deteriorate more easily than adult skeletons, and sometimes so do their pint-sized possessions.

It’s also due to the ways researchers interpret artifacts, according to Grinnell College archaeologist Kathryn Kamp: “We make assumptions about who has done certain things. And the general assumption is adult.” In other words, artifacts related to hunting or craftwork are usually attributed to grown-ups. To get kids considered, says Kamp, “we explicitly have to say, ‘Oh look, this pot has tiny fingerprints on it.’ ” This is precisely the approach she took in a 1999 study that identified children’s fingerprints on ceramics from North American sites roughly 800 years old. Her finding was a breakthrough in the then-nascent field of studying ancient childhoods.

For much earlier Paleolithic societies, stone tools comprise the bulk of surviving artifacts — and they don’t preserve fingerprints. Still, researchers have suggested some tools were the work of kids, based on signs of rookie mistakes. For example, a 2015 Quaternary International paper identified master- and novice-level pieces among artifacts made between 200,000 and 420,000 years ago in Israel’s Qesem Cave. It’s unclear, however, whether children or poorly skilled adults may have made the lower-quality items.

A few researchers have identified clearer cases of children at work. For example, in 2018 in the journal Ardèche Archéologie, Le Roy authored an analysis of skeletal remains buried in megalithic tombs in southern France, dating to roughly 4,500 years ago. Among the scattered bones in the collective burials, some teeth had distinctive grooves, likely from sewing or basket making: These marks form when people bite onto fibers being worked, using their teeth like a third hand. Le Roy found the grooves on adults as well as children as young as 4. “They were doing the same activities … producing some products and participating in the economic life of the group,” she says.

The Meaning of Their Labor

Researchers found evidence for physical labor in the children’s bones unearthed in the ancient cemetery near the mine. (Credit: D. Gröbner & H. Reschreiter/NHM Vienna)

While many children are missing from the archaeological record, says anthropologist Nikita Werner, these studies show that “you can absolutely find these kids. They’re there, and they’re doing things, and they’re doing very important things.”

The growing body of evidence of children’s presence in challenging environments like the salt mine forces scholars to confront a more philosophical question: What was child labor in ancient times — participation or exploitation?

Werner, who focused on the issue in her 2019 master’s thesis on Hallstatt, sees salt mining as central to the ancient community’s prosperity and identity. Parents would have been acutely aware of the dangers inherent in the work. But they needed the younger generation down there, helping and learning. “They would not have exposed their children to undue risk without knowing that that was going to be part of the continuation of their culture and way of life,” says Werner.

Other scholars studying childhood in the past agree. Uncovering their experiences reveals how traditions were passed on through the ages. Says Le Roy: “Children are the base of the cultural group … the next generation."