Scientists are continuing to unravel the legacy of humans' most recently-discovered evolutionary kin. 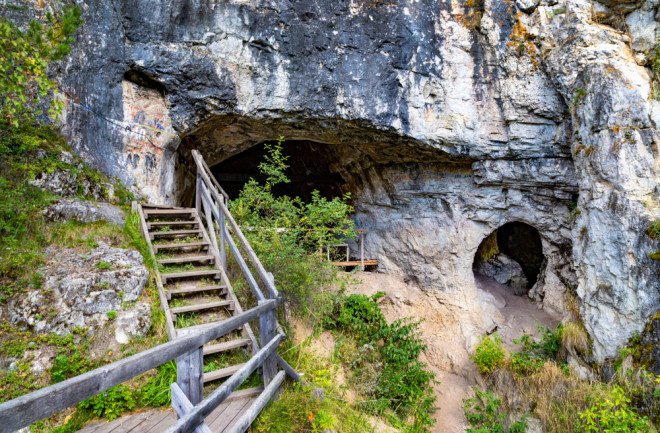 In 1980, a Buddhist monk journeyed to Baishiya Karst Cave to pray. Located at the foot of a cliff at the edge of the Tibetan Plateau in Gansu, China, the cave’s opening, punched into a vertical expanse of gray stone, is such a picture-perfect embodiment of a monastic site that it almost veers into parody. It looks remarkably like a single eye socket, peering out across the river basin below. The tableau practically begs for a grizzled sage perched at the entrance, pondering some profundity or other.

We don’t know what this anonymous monk was in search of when he plodded up the path to the cave. But he descended with something much more concrete than the usual spiritual insights obtained from such a pilgrimage.

At some point during his stay, the monk found a strange mandible — a single length of jawbone studded with a handful of enormous molars. This specimen was passed to the sixth Gungtang Lama — a “living Buddha” — who in turn gave it to researchers at Lanzhou University. The relic languished in storage for years. Little did its discoverer imagine that the jawbone was the first evidence of a new group of humans: the Denisovans. It would take nearly four decades for the import of the discovery to become clear. But the first hints of its true significance emerged in 2010, hundreds of miles away.

For decades, researchers believed that Homo sapiens emerging from Africa were the sole progenitors of modern humans. That all changed with the revelation that Neanderthals had also contributed, thanks to a team of biologists who sequenced their genome in 2009. Then, in 2010, the genetic analysis of a tooth and a tiny finger bone, both found years prior amongst the jumbled sediments of Denisova Cave in Siberia’s Altai Mountains, revealed a third human lineage  — one that has persisted in some modern human groups. These novel humans were named for the cave where they were found.

According to Bence Viola, a paleoanthropologist at the University of Toronto and co-author of the 2010 Nature paper revealing the findings, these hapless Denisovans were probably eaten, either hunted or scavenged by cave hyenas. “They usually regurgitate bones. Or poop them out. One of these two ways is likely how the bones got into the cave,” Viola says.

The same is likely true of other human remains unearthed at the site, which also include Neanderthals and modern H. sapiens. Of these findings, two other teeth (a deciduous molar and a permanent molar), a likely arm bone fragment and two pieces of parietal bone from the back of the cranium have been confirmed as Denisovan in origin.

Analysis of sediments from the cave suggest that Denisovans lived there from 300,000 to 130,000 years ago and then again beginning 100,000 years ago. Neanderthals moved in around 170,000 years ago, suggesting possible overlap with Denisovans. Modern humans, meanwhile, didn’t show up until some 45,000 years ago. These are of course rough estimates based on dating of mitochondrial DNA (mtDNA) — a spectacularly illuminating but inexact science — as well as the presence of stone tools and animal bones bearing their markings.

“Some of the oldest artifacts, which are relatively nonspecific middle Paleolithic [stone tools], were likely made by Denisovans,” Viola suggests. However, the layers of sediment deposited in the cave have been disturbed over time, making it difficult to distinguish them from those that may have been made by Neanderthals. And the paths leading to the convergence of these three groups at this remote location are even more speculative.

Though there are plenty of competing theories about the development of modern humans, at least one thing is certain: the linear progression of H. sapiens out of Africa and their direct evolution into modern humans is completely implausible. Researchers are still trying to piece together the origins of the Neanderthals and Denisovans — and their later interaction with modern humans.

The narrative they have puzzled together so far starts with the migration of a late version of Homo erectus, another early hominin species, from Africa into Eurasia around 700,000 years ago. “That branch would have been something much closer to humans today than H. erectus was,” says paleoanthropologist John Hawks of the University of Wisconsin-Madison, who has studied Denisovan origins and their relation to modern humans. “We should probably call them something else, but I don't think there's a good name for them,” Viola adds. Until recently it was thought that they might be a separate species called Homo heidelbergensis, but Hawks cautions that specimens that have been categorized as such are now more likely early Neanderthals.

Whatever their taxonomic status, these migrants split into Neanderthals and Denisovans soon after their exit — probably around 600,000 years ago. “Hominins west of the Altai are Neanderthal. And as far as we have found, hominins east of the cave are Denisovan,” Hawks says. The split was probably the result of geographic factors such as the Himalayan Mountains and the expansion of the Eurasian ice sheet.

Though they encountered each other elsewhere as well, Denisova Cave has provided the only direct archeological evidence that two groups met following their divergence and interbred. Perhaps most remarkable is that fragment of arm bone — its owner was a young girl born to a Neanderthal mother and Denisovan father.

Both Neanderthals and Denisovans then later mated with modern Homo sapiens, which journeyed out of Africa and into the rest of the world as long ago as 180,000 years ago. Early H. erectus was already present in Asia some 1.8 million years ago, and some of their descendants — called “superarchaics” —also contributed to the modern human lineage. “The Denisovan genome carries between 2 and 10 percent of DNA from a more archaic hominin group,” says Viola.

This begs the question of whether this array of hominins were actually different species, or simply populations with distinctive characteristics. The species designation in living creatures is squishy; typically, different species can’t interbreed, although plenty of exceptions have been discovered. (Take the liger, for example, a lion-tiger hybrid only found in captivity.) Ultimately, these semantic debates are of little consequence in terms of the Denisovans’ overall impact. Whether these were different species interbreeding or merely distinctive populations, their genetic legacy remains clear.

Most extraordinary among their impact is the 2019 finding that the current residents of the Tibetan Plateau derive their ability to survive in high-altitude, low-oxygen environments from their Denisovan ancestors. The source of that discovery? A protein analysis of the mandible turned up by the monk at Baishiya Cave — the only concrete testament to the eastward extent of the Denisovan population.

By contrast, the remaining proof of their presence across Asia is purely genetic. Denisovan DNA is also apparent in contemporary populations of island Southeast Asia, Australia, and even North America, although to a lesser extent. The percentages of DNA are highest in the Philippines, where 5 percent of the modern genome of the indigenous Ayta Magbukon people is Denisovan, and Papua New Guinea, where 4 percent of the modern genome of country’s highland there is Denisovan.

This suggests that the Denisovans were a fairly advanced people, capable of seafaring. They likely crossed the Wallace Line, a boundary that separates the fauna of Asia and Australia, and then bred with modern humans who later did the same. The relatively small populations of both groups in these isolated island regions may explain why Denisovan DNA has persisted there, and not in mainland Asia, where it was likely overwhelmed by a larger influx of modern humans. Still, no fossil evidence has been turned up in Southeast Asian island nations — possibly because the climate there is not conducive to its formation.

But those who study the Denisovans are hopeful that an array of promising fossils from the mainland may help to fill in the rough sketch we have constructed of their movements and influence. An assortment of bones from the Xujiayao site and the so-called Dragon Man skull described in 2021, both from northern China, are promising candidates. “Our first hypothesis is going to be that anything that is not clearly H. erectus in East Asia is Denisovan,” Hawks says. Still, pending the analysis of this material, the Denisovans will remain genetic ghosts, invoked by fragmented fossilized remains and the blood of their distant descendants.

Learn more about the Denisovans in the collection below: