When a Hummingbird Goes Courting, He Moves Faster Than a Fighter Jet 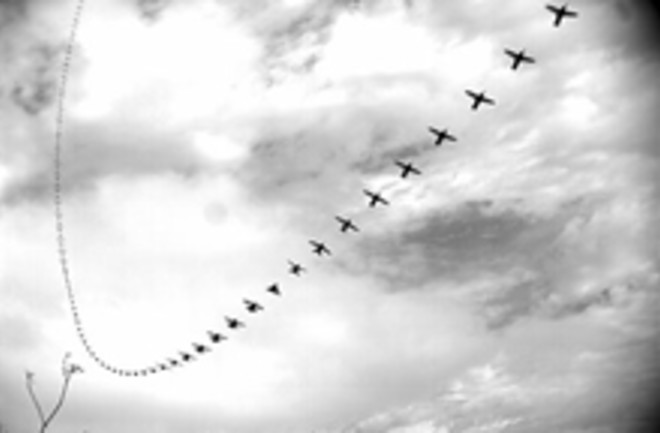 A hummingbird in love can perform aerial stunts that put fighter pilots to shame. In a new study, researcher Christopher Clark captured the male hummingbird's daring dives with cameras that can capture 500 frames per second. To get the footage, Clark set out

a caged female, or even a stuffed female on a stick, to inspire birds to dive right in front of his video cameras [Science News].

In the study, published in the journal Proceedings of the Royal Society B, Clark observed the Anna's hummingbird, a tiny bird native to the American southwest. In the male's courtship display he dives down dramatically with his wings pressed to his sides, and then dramatically stretches out his wings and tail feathers to break his momentum and bring him swooping back up into the sky. Clark says that the maneuver sets some records.

When measured relative to the length of their bodies, the birds' top speed, he said, was "greater than [that] of a fighter jet with its afterburners on, or the space shuttle during atmospheric re-entry" [BBC News].

Clark calculated that the 50 miles per hour

speed of the hummingbird at the fastest point in its descent is equivalent to it moving 383 times its body length each second.... "During their courtship dive, male Anna's hummingbirds reach speeds and accelerations that exceed the previous performance records for vertebrates undergoing a voluntarily aerial manoeuvre" [The Independent]

, he says. While the peregrine falcon easily tops the Anna's hummingbird in absolute speed, achieving speeds greater than 150 miles per hour, its maximum velocity can also be stated as about 200 body lengths per second--meaning that both the mighty falcon and the diminutive hummingbird can claim the title of the world's fastest bird. At the end of a courtship swoop, when male hummingbirds

pull out of their plunge to avoid crashing, they experience forces more than nine times the force of gravity.... When the birds experience the maximum g-forces in their dives, Clark notes, the birds enter the range where human pilots, more vulnerable due to larger bodies and circulatory systems, have to be careful about the risk of temporary blackouts [Science News].

Related Content: 80beats: Scientists Glean Secrets of Flight From Birds, Bats, and Bugs 80beats: Not So Bird-Brained After All: Rooks Make and Use Tools 80beats: Mockingbird to Annoying Human: “Hey, I Know You” 80beats: Watching YouTube Videos of Dancing Birds for the Sake of ScienceImage: C. Clark