Mockingbird to Annoying Human: "Hey, I Know You" 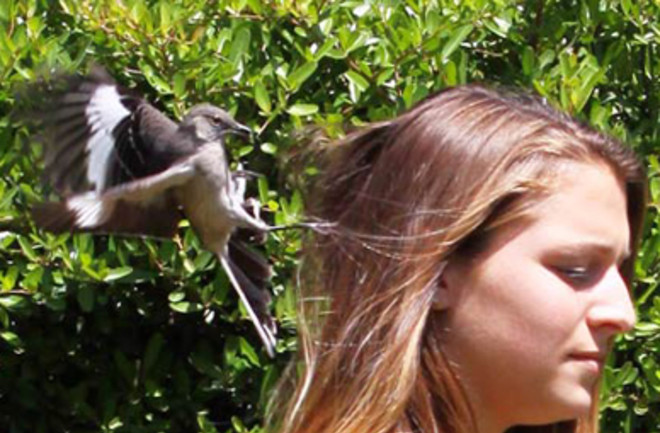 If you get on a mockingbird's enemy list, expect to be dive-bombed every time you come within the bird's sight. That's one lesson that can be taken from a new study which proved that mockingbirds can recognize individual people, and attack those who have bothered their nests in the past. While ornithologists knew that certain highly intelligent birds like parrots and crows can recognize humans in a lab setting, they were surprised to find similar behavior in a songbird living in the wild.

This paper is "a beauty," says John Fitzpatrick, an ornithologist at Cornell University. "It's amazing what a bird brain can do" [ScienceNOW Daily News].

The study was prompted by a series of bird attacks.

A graduate student involved in research on bird nesting noticed that when she would make repeat visits to peoples' yards the birds would alarm and attack her, while they would ignore people gardening or doing other things nearby.... Indeed, it seemed they could even recognize her car, and she had to start parking around the corner [AP].

So the researchers designed an experiment to investigate whether the birds really could identify an individual person. For the study, published in the Proceedings of the National Academy of Sciences, the researchers identified 24 mockingbirds watching over egg-filled nests on the University of Florida campus in Gainesville. For each nest, they had one volunteer approach and touch the eggs over the course of four days, but on each day the volunteer approached at a different time, came from a different direction, and wore different clothes. Still, with every

visit, the bird grew more agitated. At first, the mother bird waited until the person came close and then flew to a nearby bush to shout out alarms calls, a behavior called flushing that birds do to distract predators in the wild. But by day four, mom was up and out of her nest when the volunteer was almost 14 meters away--and she or her mate dive-bombed the volunteer's head [ScienceNOW Daily News].

When a new volunteer approached the nest on the fifth day and touched the eggs, the mother bird started the get-to-know-you process from scratch, and merely called alarms from a nearby bush. Researchers say it's remarkable that the birds can pick out one human from the hundreds who pass near their nests each day on the busy campus, but suggest that they're building on a preexisting ability to monitor potential threats. Says lead researcher Doug Levey:

"We don't believe mockingbirds evolved an ability to distinguish between humans. Mockingbirds and humans haven't been living in close association long enough for that to occur. We think instead that our experiments reveal an underlying ability to be incredibly perceptive of everything around them, and to respond appropriately when the stakes are high" [The Guardian]

. Related Content: 80beats: Watching YouTube Videos of Dancing Birds for the Sake of Science 80beats: We Told You Chicks Are Good at Math: They Count, Add, and Subtract 80beats: One Giant Leap for Birdkind: A Magpie Looks in the Mirror and Recognizes ItselfImage: Lou Guilette/PNAS. A mockingbird dive-bombs one of the volunteers.