Not So Bird-Brained After All: Rooks Make and Use Tools 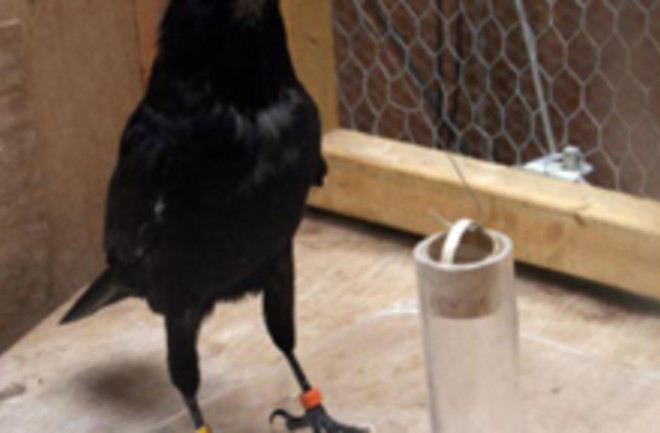 Four rooks by the names of Cook, Connelly, Fry, and Monroe have upped estimates of birds' intelligence by mastering a series of challenges in which they had to use tools to get tasty worms. Researchers say that

the birds' skills rivalled those of well-known tool users such as chimpanzees and New Caledonian crows.... "The study shows the creativity and insight that rooks have when they solve problems," [BBC News]

, says study coauthor Nathan Emery. Their abilities are all the more remarkable, researchers say, because rooks are not known to use tools in the wild. In the laboratory tests, researchers devised a series of challenges in which the rooks had to figure out how to

release food from glass tubes. The first featured a worm on a platform that would collapse, allowing it to be eaten if a stone were nudged into the tube. All four birds completed the task. They also chose stones of appropriate shape for tubes of differing sizes.The rooks were also quick to realise that long, thin stones would fit in every tube, regardless of its diameter, as long as it went in lengthways [The Times].

But picking up stones was a modest accomplishment compared to what came next. In a more sophisticated achievement, the birds fashioned a hook out of a straight piece of wire and used it to pull a small bucket up through the glass tube to retrieve the worm inside.

"We suggest that this is the first unambiguous evidence of animal insight because the rooks made a hook tool on their first trial and we know that they had no previous experience of making hook tools from wire because the birds were all hand-raised," Emery said in a statement [AP].

The study, which will be published in the Proceedings of the National Academy of Sciences, suggests to researchers that the entire crow family may have a deep intelligence that can be turned to tool use if necessary. While New Caledonian crows are known to use tools in the wild, to pull grubs out of holes, researchers note that rooks haven't faced the same ecological pressures, as they find plenty of carrion and human scraps to keep them well fed.

The researchers said that this could mean that an ancient ancestor of the corvids might have evolved the capacity to use tools as well as a complex understanding of the physical properties of materials.... "Because [the rooks] don't use tools in the wild, the question is why should they have evolved the ability to use tools in the lab and understand the properties of those objects as tools? Is this a form of general intelligence that has been co-opted for tool use?" [BBC News]

, wonders Emery. Related Content: 80beats: Mockingbird to Annoying Human: “Hey, I Know You” 80beats: Watching YouTube Videos of Dancing Birds for the Sake of Science 80beats: We Told You Chicks Are Good at Math: They Count, Add, and Subtract 80beats: One Giant Leap for Birdkind: A Magpie Looks in the Mirror and Recognizes ItselfImage: PNAS