The 2018 eruption at Hawaii’s Kīlauea was the volcano’s largest in centuries, yet identifying exactly what caused it to start is challenging. 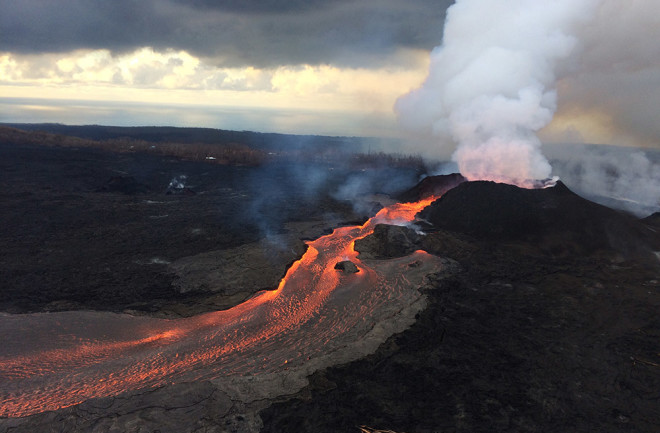 The 2018 eruption at Hawaii's Kīlauea volcano was as spectacular as it was destructive. Over a quarter of a cubic mile of lava poured out at the eastern edge of the big island, burying multiple towns and filling in an entire bay. It was an eruption that was unexpected in many ways: the massive volume of lava erupted, the location that the many vents formed far from the summit and the collapse that happened at the distant top of Kīlauea. So, what might have triggered this eruption in the first place?

That is a tough question to answer. What exactly causes volcanoes to erupt is an open question in volcanology. There are definitely a few geologic events we can point to as something that can push a volcano to erupt. New intrusions of magma into the volcano is the big one. The new magma mixes with older magma inside the volcano. All that new heat, gas and molten rock can overpressure the system that holds all that magma, causing some to erupt.

We can also point to gases dissolved in magma. As magma rises and cools, it will release these gases like water and sulfur dioxide in the form of bubbles. Adding all those bubbles can cause similar overpressure leading to a big boom.

People have speculated about a lot of potential eruption triggers. Many of these just don’t pan out as significant enough to cause a volcano to erupt (unless they are going to erupt anyway). Earth tides (stresses caused by the moon, much like ocean tides), planetary alignments (nope), lunar phase (double nope) or lunar distance (aka supermoons) and even human drilling have been proposed, but show no statistical connection to eruptions starting. Even a nearby volcano erupting won’t trigger another volcano to go.

Earthquakes are another suspect for triggering eruptions. However, no evidence exists to show that really big earthquakes can cause volcanoes to erupt in other parts of the world. Even large earthquakes happening near potentially active volcanoes don’t seem to trigger eruptions often. The M9.5 Chilean earthquake in 1960 may have caused some volcanoes in the region to become restless weeks to months afterward, but they were likely priming for activity before the earthquake.

What Prompted the 2018 Eruption?

This brings us back to Kīlauea. The 2018 eruption changed the game at the massive shield volcano that had been erupting for over 35 years prior to the fissures opening in Leilani Estates. There had been two long-lived lava lakes (more or less constant eruptions) at the summit Halema‘uma‘u Caldera and at Pu‘u ‘O‘o, 4 miles down the East Rift Zone. Yet something had caused these eruptions to cease and a new eruption to start over 18 miles away.

Matthew Patrick at the U.S. Geological Servey's Hawaiian Volcano Observatory (HVO) describes the magmatic system at Kīlauea like a series of pipes. Normally, the magma in the pipes comes out at faucets like the summit or Pu‘u ‘O‘o. However, there are times when pressure can build and the pipes can burst. Anyone who has dealt with frozen pipes knows what happens next: an eruption of water. At Kīlauea, we get lava pouring out of those burst pipes. So, what can get these pipes to burst?

A new study in Nature by Jamie I. Farquharson and Falk Amelung of the University of Miami makes the bold assertion that it might have been heavy rainfall that triggered the 2018 eruption. Pressure inside a volcano is one of the most important mechanisms to drive eruptions. That’s why new magma intruding and gas pressure are two triggers for eruption. Farquharson and Amelung instead propose that all the rain increased the pressure underground to such a point that the magma in Kīlauea took that opportunity to open a new vent.

How would this work? Remember that most rain percolates into the ground. The heavy rains — possibly up to a meter over the period before the eruption started — would fill in all the open space up to a few kilometers under the volcano. All that water seeping into the open space would exert a lot of pressure on the volcano and magma would start creating a new “pipe” that bursts to cause an eruption. The authors go on to suggest that rainfall could be used to help forecast eruption and that increased precipitation caused by climate change might cause eruptions to happen more often.

Blame it on the Rain?

It is an intriguing (and controversial) idea, but not without its problems. Although the authors suggest that Kīlauea may not have been pressurizing with new magma before the 2018 eruption began, there are definitely signs that pressuring was happening. The summit lava lake filled to the rim and overflowed in the weeks prior to the new eruption.

Lava lake levels are a bit like dipsticks for volcanoes. The rising and lowering of the lava lake reflect the state of pressure in the volcano, so overflowing likely meant pressure was building and quickly. Yet there weren’t many signs of new magma coming from the source tens of kilometers below the volcano.

This brings us back to Patrick’s “leaky pipes.” As he put it, pressure can build from two ways: adding new stuff to the system and blocking some part of the system. If the former wasn’t happening, then maybe the latter was. Just like unclogging a pipe, once a blockage is removed, the magma starts moving again.

Spattering lava from Fissure 3 early in the 2018 eruption of Kīlauea. (Credit: USGS/HVO)

Looking at the lava that erupted during the 2018 eruption, we can look at the composition of the lava itself and the crystals it carried to get an idea if this is possible. Sure enough, a study by Cheryl Gansecki and others in Science suggests that the first stuff out during the eruption had been hanging around inside the volcano for a while — a good candidate for the “clog” that got flushed before the real show began.

The proposed rainfall trigger is an interesting idea, as there is some inkling of a correlation between the eruptive activity at Kīlauea and periods of higher rain. Yet we still don’t really understand the complicated networks of groundwater flow on the big island. So, right now, this correlation might not point to causation just yet.

Tina Neal, scientist-in-charge of HVO, welcomes this new research looking at how Kīlauea and volcanoes like it might operate. However, this research is still controversial, so she warns not to expect an eruption every time there is a lot of rain near the volcano.

Similarly, the potential for increased precipitation from climate change isn’t going to cause all volcanoes to start erupting more either. Our understanding of what triggers volcanic eruption is still growing; but, as with most natural systems, the exact cause might be much more complicated than we might hope.