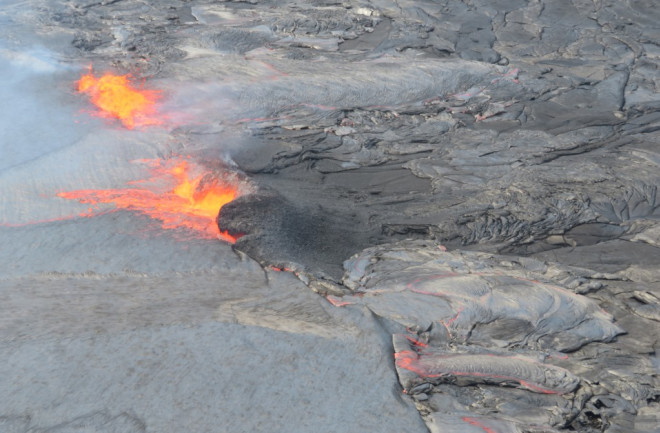 Lava flows spilling out onto the floor of the Halema'uma'u crater from the lava lake. Seen on April 25, 2018. HVO/USGS. Last week, I mentioned that things are getting exciting at Kilauea in Hawai'i, and sure enough, at least one thing changed at the summit lava lake: it started to overflow! The lake levels go so high that lava began to spill out onto the floor of the crater where the lava resides. This created new, dark basaltic lava flows coating the crater floor (see above and below). Geologists from the Hawaiian Volcano Observatory took a helicopter over the lava lake to catch a better view of the new lava flows:

Kilauea's Lava Lake overflowing on April 26, 2018. USGS/HVO In the video, you can see the area of dark black lava that has erupted over the past few days -- and it covers a large area of the crater floor. In fact, only about 25% of the original crater floor hasn't been covered by these new flows. Even with these new lava flows forming in the summit caldera, both the summit and East Rift are inflating, suggesting magma is still filling in from below. However, there are no signs yet that a new eruption will be starting in-between the summit and Pu'u O'o on the East Rift to relieve some of this pressure. One of the sure signs to look for that an eruption might be in the works is a rapid drop in the summit lava lake. Right now, the lava lake continues to rise (well, produce lava flows), so the pressure is still high. If the lava flows from the lava lake continue, a rim might form on the edge of the lava lake, producing what is called a "perched" lava lake, where the lava lake surface might be higher than the floor of the crater around it. This may or may not form depending on how vigorous is the overflow and how long this condition lasts. Remember, you can watch a lot of the action on the HVO webcams, both from a distance and from right above the lava lake. If the lava lake level starts to drop rapidly, be sure to check out the webcams on the East Rift near Pu'u O'o to see if a new eruption is starting.