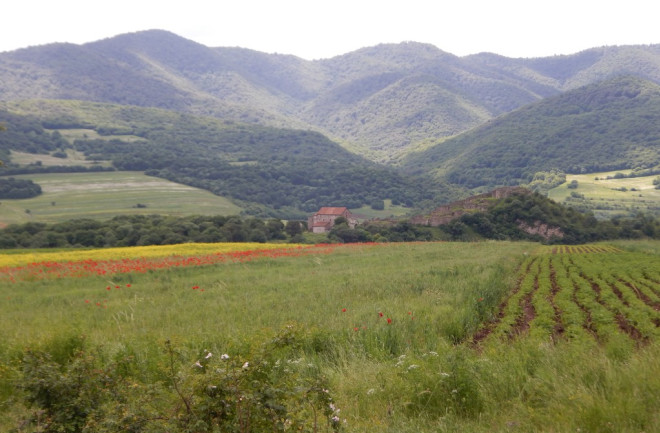 In a quiet corner of the Republic of Georgia, hidden beneath medieval and Bronze Age ruins, the hominin fossil jackpot of Dmanisi is rewriting the story of human evolution. All photos credit: G. Tarlach Pop quiz, hotshot: what are the most significant fossil sites for piecing together the story of human evolution? Your list probably included Tanzania's early hominin-rich Olduvai Gorge and Hadar, Lucy's hometown in the Afar region of Ethiopia. Maybe you thought of the Rising Star cave system, which hogged hominin headlines last year with the announcement of the Homo naledi finds within. Or you went old school, naming Trinil, where a young Dutchman uncovered Java Man, aka Homo erectus, more than a century ago. Was Dmanisi on your list? It should have been, arguably near the top. The sheer age of the multiple hominin fossils from Dmanisi — about 1.8 million years old — has already challenged the conventional timeline for when the first members of our genus left Africa. And there is much more to discover. Situated on a promontory overlooking the confluence of two rivers in a bucolic corner of the Republic of Georgia, Dmanisi is one of the world's richest and most intriguing fossil sites for hominins. Yet it remains largely under the radar outside academic circles. That's a shame, because what researchers have uncovered there over the past 25 years rivals other, more famous sites.

Angry Dmanisi hominin (reconstruction of Skull 5 at the Georgian National Museum in Tbilisi) wants some respect.

For starters, researchers have unearthed five hominin crania, each with a different story to tell. D3444, for example, belonged to an elderly adult, and the associated jawbone is missing all its teeth. The individual was toothless and unable to chew, in fact, for the last several years of life, which suggests survival was only possible with some help. That implies community and society. Then there's the famous Skull 5, which is generally the fossil you've seen if you've seen anything from Dmanisi. Spectacularly complete and beautifully preserved, Skull 5 doesn't look much like the other four crania, with its massive brow ridge and robust, protruding face. Believed to belong to a male, Skull 5 also has the smallest braincase of the five individuals. It's so different from the other crania that some researchers have suggested it must be a different species. The Dmanisi team, however, believes all the individuals found at the site belong to a primitive form of H. erectus. I have heard some speculation that Dmanisi hominins may have evolved from an early, unknown (and certainly unexpected) African exodus of Homo habilis, the first known member of our genus, which evolved in Africa around 2.5 million years ago. But the truth is, the Dmanisi bunch don't fit neatly anywhere into our expectations of early Homo.

Casts of the five Dmanisi crania and associated mandibles, the hominin pride of Georgia, on display at the national museum in Tbilisi. Robust but small-brained Skull 5 (right) dwarfs elderly, toothless adult D3444 beside it. According to the conventional timeline for the rise of genus Homo, H. erectus was just getting its act together in Africa, where it evolved, at about the same time that hominins were already calling Dmanisi home, trying to survive and not get eaten by the various predators around, including Etruscan wolves and saber-toothed cats.

Etruscan wolf, one of many things that could kill you 1.8 million years ago. Fossil from Dmanisi now on display at the Georgian National Museum. Of the thousands of animal bones found at Dmanisi, both predator and prey, none belong to African species (aside, of course, from the hominins). That means the hominins at the site had to have adapted to a new environment with different fauna, as well as a colder climate with distinct seasons, apparently without fire or advanced stone tool technology (evidence of neither has turned up so far).

Credit: Rasbak/Wikimedia Commons The ability to live one continent north of where we'd expect to find them 1.8 million years ago is just another intriguing puzzle about the Dmanisi hominins. Although their post-cranial (below the neck) skeletons were fairly modern, they had brains the size of a bocce ball, as one long-time Dmanisi researcher puts it. Think about what their presence at Dmanisi says. It's basically sticking out your tongue and going "nyah-nyah-nyah" at the decades of assumptions that only fancyman H. erectus, when fully evolved, had the brains and the tools and the fire required to make it out of Africa and survive.

Locals of Dmanisi Past and Present

On a recent vacation to Georgia, I knew that, in between the hiking and castle-hopping and wine-tasting (Georgia is quite possibly where viticulture originated — look for a post on that soon), I had to visit the oldest known hominin site outside Africa. My first stop was to check in with archaeologist Teona Shelia at Tbilisi's Georgian National Museum. A walking encyclopedia of information about the site, she has participated in 24 of the 25 dig seasons there. While she never intended to make Dmanisi her career — "I did not plan to be a Stone Age archaeologist. I like pretty things," she told me with a laugh — her work on stone artifacts and other finds at the site has provided crucial context for understanding what the world the hominins lived in was like. Teona and I chatted beside the Dmanisi exhibit at the museum's entrance. She scribbled directions for the route and, with typical Georgian hospitality, gave me her number and told me to call at any hour if I had problems. Then I set off in my rental vehicle, through the clogged streets of Tbilisi. At last the way opened into a two-lane road lined with farmers selling tomatoes, watermelons stacked in pyramids taller than my Suzuki Jimmy and displays of churchkhela, the Georgian version of trail mix. It's made by stringing up walnuts and then dipping them repeatedly into a kind of slurry of grape juice and flour. Once dried, it travels well and can be eaten kind of like a corn dog. It's calorie-dense food on a stick — why it hasn't caught on at state fairs I don't know.

Roadside display of nuts and churchkhela, the nut and grape juice concoction found all over Georgia. Some researchers I've spoken with informally about Dmanisi have suggested it's not as high profile as, say, South Africa's UNESCO World Heritage site Cradle of Humankind because it's harder to get to. Pfft to that. Dmanisi is only about a two-hour drive southwest of Georgia's capital city, and most of that trip is good road — though you'll have to share it with sheep.

Rush hour on the main road — the only road — from Tbilisi to Dmanisi. The last few kilometers are currently getting a facelift so yes, it's rough going, but I made it without needing 4-wheel drive. It's a steep trip up the side of the bluff before arriving at the site, which today is a mix of meadow and woodlands. Aside from the hominin dig, researchers have been combing over the promontory for decades, finding Bronze Age artifacts, baths from the days of the Silk Road and a sprawling medieval fortress that once crowned a thriving trade city.

Baths at Dmanisi that once refreshed Silk Road travelers are, quite frankly, in way better condition that some of the budget guesthouses I stayed at on my trip. It's because of those later ruins that we know anything about the hominins. In the 1980s, archaeologists digging in the medieval cellars started finding animal fossils that had no business being in a medieval cellar: they had gone extinct hundreds of thousands of years earlier. And before a few of you start kvetching again that I'm implying long-extinct animals were around in medieval times, know that the dating at Dmanisi is particularly solid thanks both to paleomagnetic and tephrochronological dating methods. The Eurasian beasties and the hominins were running around the site 1.8 million years ago, give or take a few millennia.

The medieval fortress of Dmanisi — who knows how many hominin fossils, yet unearthed, might be hidden beneath it? At Dmanisi I met Guram, the local resident and longtime site manager who spoke no English and only very fast Russian. My Russian is a bit rusty but I managed to follow most of what he told me, and to pick up on his obvious pride about being associated with the site.

Site manager Guram, posing between two medieval-era walls close to where the hominins were found, knows Dmanisi perhaps better than anyone. Having read so much in the journals about Dmanisi, what surprised me most standing there on the lip of the dig site was how compact it was. More than 10,000 fossils, including nearly all of the hominin finds, have come out of a modest pit smaller than most American apartments.

The excavation site at Dmanisi where more than 10,000 fossils, including those of at least five hominins, have been found in the last 25 years. Perhaps even more amazing was seeing just how much that pit still has to offer: animal bones lie in situ and poke through rock layers in every direction.

Animal bones (in white) at Dmanisi give visitors a sense of the fossiliferous site's wealth.

Guram and I strolled further afield from the hominin site, past a working monastery where a monk silently tended his bees. Aside from a few birds chirping, the promontory seemed still and ancient...and perhaps a little secretive, as if it had many more stories to tell us, in its own time.

A monk tends to his bees at a small working monastery at the Dmanisi site. Dmanisi is on UNESCO's "tentative" list for World Heritage consideration, though I'd argue its recognition as such is long overdue. Walking through the tall grass over half-buried rock and ruin, standing at the edge of the apartment-sized dig site and looking down at the bones jutting from the rock, I got goosebumps. The entire promontory could fit several football fields, but nearly all of it is, as of now, unexplored. Early results from handful of test sites beyond the current area of excavation suggest that researchers have barely scratched the surface of the hominin fossil finds at the site. We're going to be hearing a lot more from Dmanisi soon. My thanks to the lovely Teona Shelia and fast-talking but warm-hearted Guram in Georgia, as well as University of Minnesota paleoanthropologist and Dmanisi research team member Martha Tappen, who put me in touch with them. Some readers will want to know if my trip to the site was a PR junket. It was not. I went on my own time (and my own dollar) because learning stuff is awesome and sites like Dmanisi need to be seen and appreciated whenever one has the opportunity to do so.