The First Humans to Know Winter

Fossils are just one piece of the puzzle at the oldest hominid site outside Africa. Will it rewrite human evolution? 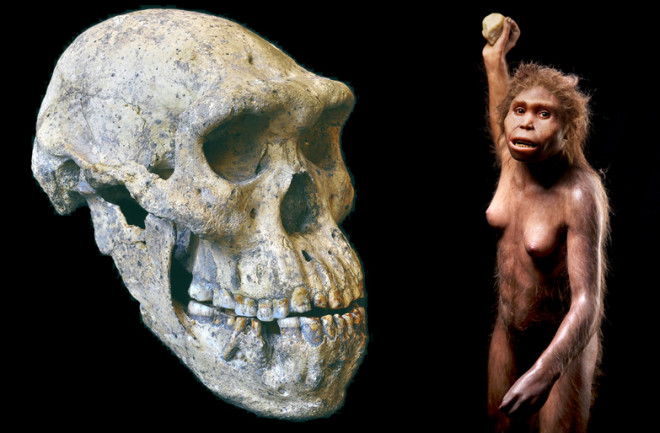 Beautifully preserved for about 1.8 million years, the Dmanisi fossil known as Skull 5 (left) has a small, primitive braincase — less than half the volume of our own. But the hominids’ bodies were similar to modern humans, as shown reconstructed by artist Elisabeth Daynes (right). Guram Bumbiashvili/Georgian National Museum; S. Entressangle/E. Daynes/Science Photo Library

They were small, the tallest barely more than 5 feet. Their bodies were essentially the same as modern humans — from the neck down. Their skulls were another matter, with braincases less than half the size of ours. About 1.8 million years ago, they were the first humans to know winter.

Ongoing excavations at Dmanisi, a site in the Republic of Georgia, have yielded scores of early hominid fossils, including five skulls and, most recently, a complete male pelvis found in 2014. The fossils’ mix of primitive and more evolved characteristics — such as small brains but body proportions similar to our own — defies how we currently classify our distant ancestors and relatives. An equally compelling mystery, however, is what the hominids were doing at Dmanisi in the first place.

Dmanisi’s hominid fossils, the oldest outside Africa, have been excavated with more than 10,000 bones from about 50 other extinct species, including deer, bears and saber-toothed tigers. The trove of fossils hints at the rich biodiversity of the site, which is hundreds of miles north — and more than a thousand miles away — from any other hominid activity during the Gelasian Pleistocene, 1.8 million to 2.5 million years ago. Hominids, specifically the fairly advanced Homo erectus, began to disperse from Africa only at the tail end of that period, according to the current timeline of human evolution.

“Dmanisi was a good place to die,” says Martha Tappen, a paleoanthropologist at the University of Minnesota and part of the Dmanisi team since 2001. She believes the site’s natural features made it an attractive place for numerous species — and for the large carnivores that hunted them.

The unmistakable remains of an early species of saber-toothed cat, found at Dmanisi with more than 10,000 other bones. Kenneth Garrett/National Geographic Creative

Dmanisi sits atop a promontory overlooking the confluence of two rivers. Access to water likely lured the animals to the area initially. Once they moved up the wedge-shaped bluff, however, they had nowhere to run to escape the resident megacarnivores, including the lion-size European jaguar, Panthera gombaszoegensis.

Tappen, who describes her role on the team as largely “trying to determine who ate whom,” has found a lack of weathering on Dmanisi’s animal and hominid bones, suggesting they were sheltered from the elements soon after death. About a fifth of the bones have signs of carnivore predation, and many fossils were found as segments of articulated skeletons — think an entire shoulder rather than just a collarbone. Some of the fossils were deposited with ligaments still attached. The evidence suggests that many of the bones were piled in dens of the large carnivores.

The beautifully preserved Skull 5, for example, described in Science in 2013 and arguably the most famous Dmanisi hominid fossil, was found beside a deer bone and a baby rhinoceros femur that had been chewed. Tappen also found evidence, however, that the hominids were predator as well as prey. The deer bone beside Skull 5, for example, had a stone flake tool embedded in it, and tool marks on some of the other animal bones suggest the hominids, at least occasionally, enjoyed the choicest cuts.

“We see evidence the hominids were eating meat from around the femur and humerus. That, along with the torso, is where carnivores eat first,” says Tappen.

The hominids may have used rounded stones found around the site to throw at predators, either in defense or to scare them away to scavenge their kills, Tappen believes. If proven, the stones would be one of the earliest documented weapons wielded by Homo.

A key finding at Dmanisi, says Tappen, is that all of Dmanisi’s herbivores, and most of its carnivores, were from Eurasia, not Africa.

“In terms of hominids spreading out of Africa, it seems that they did not spread with other fauna. That they made it to the higher latitudes without other animals moving at the same time tells you humans made it out of Africa not because the environment was changing or because the biome was moving,” says Tappen. “They went of their own volition.”

The Dmanisi site, tucked into the Anti-Caucasus mountains at about 41 degrees north latitude — similar to present-day New York and Beijing — would have presented a particular challenge for an African species.

“At the higher latitudes, you’re confronting seasonality for the first time,” Tappen says. “They were experiencing winter. No other primate lives where there’s no fruit in winter. There may be a dry season, but there’s not a cold winter like these individuals in Dmanisi were experiencing.”

Tappen believes the hominids, whose brains she describes as “the size of a bocce ball,” survived by adapting to a more meat-centric diet and by eating things like tree bark.

But what puzzles some researchers even more about the Dmanisi hominids showing up more than a thousand miles north of Africa, much earlier in the fossil record than expected, is that they made it to the mountain valley without any advanced technology.

Out of Africa Early

“It would seem that, in the earliest dispersal of humans, some kind of technology would give you an edge. If you don’t have hand axes, maybe you have fire,” says Michael Chazan, an archaeologist at the University of Toronto. “But there is no evidence of either at Dmanisi.”

Chazan is not part of the Dmanisi team, but he has reviewed evidence of the technologies used by hominids there. He says few stone tools have been found at the site compared with other early hominid occupations, such as Ubeidiya in Israel. Intriguingly, the tools at Dmanisi were Oldowan style, also known as flake and core: It’s the simplest stone tool technology, first seen in Africa 2.5 million years ago. In contrast, hominids living in Africa at about the same time as the Dmanisi population were making much more advanced tools, such as hand axes.

The finds at Dmanisi hint that the first humans to leave Africa were not the larger-brained, hand ax-toting, potentially fire-wielding H. erectus. Rather, they were a much more primitive hominid population, possibly Homo habilis, whose members lived in, or at least transited, Dmanisi much earlier than what our accepted chronology of human evolution indicates. It’s possible that the current view on when humans first left Africa is wrong, but if those first pioneers traveled without the easily recognizable advanced tools of H. erectus, it’s also possible we may never find proof.

Says Chazan: “The problem that keeps you awake, if you think about these things, is that if there was a dispersal event 2 million years ago, before H. erectus, would we see it? If they were using stone tools made of local materials, would we even pick it up? Are we building our models based on things we can’t see?” Dmanisi team member Tappen agrees the site’s fossils are challenging our current understanding of human evolution — but she’s not losing sleep over it.

“As archaeologists, we go with what we have. We make hypotheses and try to test them, and then you dig up something new and go ‘oops.’ And you have to make up a new hypothesis,” says Tappen.

“The Dmanisi individuals are not too different from H. habilis. We should find them dispersing out of Africa 2.5 million years ago,” she explains. “We don’t have that evidence yet, but we have to expect it’s out there.”

If there were an earlier hominid exodus from Africa 2 million years ago or longer, researchers don’t expect to find the proof at Dmanisi. All the hominid fossils found so far have been between two layers of volcanic rock from regional eruptions conclusively dated between 1.76 million and 1.85 million years ago.

Archaeologists began digging at Dmanisi in the 1930s, interested in the site’s ruined medieval fortress. While excavating the fortress cellars in the 1980s, researchers began finding the teeth and bones of extinct animals from the early Pleistocene — the first clue to the site’s prehistoric significance.

Since the first hominid fossil was found in 1991, however, the uniqueness of the site itself has been overshadowed by the strange appearance of its early humans. Their short stature and small braincase suggest H. habilis, which first appeared about 2.3 million years ago in Africa. But H. habilis never left Africa, according to the current fossil record. And other characteristics of the Dmanisi hominids, such as their more modern limb-to-body proportions, don’t match up with H. habilis at all but do fit with H. erectus, which evolved in Africa about 1.9 million years ago. H. erectus eventually spread as far as China and Indonesia, but not until much later in the fossil record than the Dmanisi finds.

The significant variation among five hominid skulls from Dmanisi, as shown in this computer-drawn rendering, has led some experts to argue the skulls represent more than one species from the genus Homo. Marcia Ponce de León/Christoph Zollikofer/University of Zurich

Dmanisi team members, among others, contend that the Georgian fossils belong to a single early population of H. erectus or to a single sub-subspecies, Homo erectus ergaster georgicus. An opposing camp insists the fossils represent multiple species of as-yet-unnamed hominids.

“In the 1990s, on the family tree of hominids, we had maybe 12 species. Now there are 25,” says Ian Tattersall, a paleoanthropologist and influential author of books such as Becoming Human. “The family tree is even more bushy than that, but people are still trying to fit things into pre-existing categories.”

Tattersall is not part of the Dmanisi team, but he has examined some of the fossils. In 2014 he co-authored an article in Science criticizing the idea that the hominids all fell under the H. erectus umbrella. He believes the five skulls represent at least two other early hominid species. Differences in age and sex, says Tattersall, cannot account for the wide variation in features such as jaw and brow shape not only among Dmanisi skulls, but also when compared with H. erectus fossils from other sites.

“One species may show variation on a theme, but Dmanisi shows a variation of themes,” says Tattersall. For now, the fossils’ place on our family tree, like their presence at Dmanisi as early as 1.85 million years ago, remains an evolutionary enigma.

“If I had a word for Dmanisi, [that word] would be tantalizing,” says Chazan. “If you try to explain what the site means, you can’t. But what excites people about archaeology is not the answers. It’s the questions, the things we don’t know. Dmanisi is that kind of story.”

[This article originally appeared in print as "Our First Winter."]