Centuries before Columbus, a small band of Norse people explored the Canadian coast. For now, the only proof is a single settlement. Here’s what’s known about how the Vikings came to North America, where they landed and why they left. 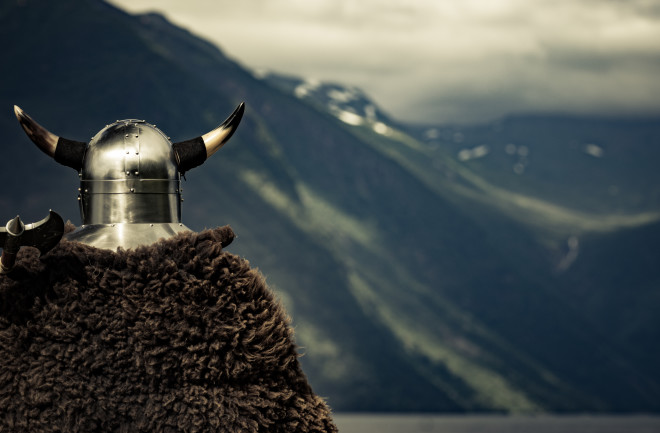 Vinland, or the “land of wine,” isn’t listed on any modern map. A thousand years ago, however, it served as the stage for a monumental moment in world history. Icelandic sagas record it as the place where, 500 years before Columbus ever sailed a ship, the Vikings became the first Europeans to set foot on the so-called "New World," even building a short-lived settlement.

By the late 980s A.D., these Norse seafarers had already established colonies in Iceland and Greenland, the Atlantic stepping stones that brought them within range of the Canadian coast. From there, according to the oral reports of the time (written down two centuries later in the Saga of the Greelanders and the Saga of Erik the Red), the Vikings stumbled upon North America around A.D. 1000. Over the next couple decades they made several expeditions to this new-to-them world. They built homes, harvested resources, traded — and clashed — with the natives. Then, as quickly as they arrived, they abandoned Vinland.

The two accounts often differ. In the Saga of the Greenlanders, after the accidental sighting of unknown western lands, Leif Eriksson explores three distinct regions of Canada: Helluland, or “land of flat stones,” which was probably the barren Baffin Island; Markland, or “land of forests,” which was probably along the Labrador coast; and Vinland, a warm region in what is now the province of Newfoundland where Eriksson and a small crew wintered. In the Saga of Erik the Red, Eriksson is the accidental discoverer of Vinland, and an Icelandic merchant named Thorfinn Karlsefni is its explorer.

Details aside, we now know these tales are at least broadly true: The Vikings did venture to North America in roughly the timeline the sagas describe, making them the first people to bridge the world’s oldest cultural divide.

For centuries, scholars lumped Vinland together with other fabled realms, like Atlantis or Avalon. But archaeologists kept looking, and in 1960, the search paid off when Anne Stine Ingstad and Helge Ingstad of Norway excavated a series of earthen structures located on Newfoundland’s northern edge, near the entrance to the Gulf of St. Lawrence. The site, L’Anse aux Meadows, proved to be of Norse origin. To date, it’s the only verified Viking settlement on the continent.

It consists of eight timber-frame buildings with thick walls of sod, built in the same style seen in Greenland and Iceland. Some were dwellings, others forges and workshops. The digs uncovered evidence of iron production and ship repair, among other activities. Experts estimate this cluster of homes and workshops could have supported 70 to 90 people year round, and likely took at least two months to construct.

Birgitta Wallace, a Swedish-Canadian archaeologist who worked with the Ingstads and conducted further excavations for Parks Canada in the 1970s, is careful to note that there’s more to Vinland than this outpost. “Many people make the mistake of thinking that Vinland is just a point on the map,” she says, “but it’s a land, the same as Greenland [or] Iceland. It means a big area.”

The first part of the word explains why this big area so enticed the Vikings — it was flush with wild grapes, the key ingredient in wine, which didn’t grow anywhere near their desolate homeland. “A chieftain’s power in Norse society was based primarily on how he could show off and be very impressive,” Wallace says. “Having wine would impress the hell out of anybody, because it was so rare.” According to the Saga of the Greenlanders, Eriksson loaded his ship with grapes during his first voyage. He and his followers were also drawn to the timber, since Greenland has virtually no trees.

Why Did the Vikings Leave North America?

Given the long-term architecture at L’Anse aux Meadows and the bounty surrounding it, Wallace says, “I think this was a place they intended to use for a long time. But according to the archaeological evidence, they didn’t.”

That, too, fits with the sagas — the Vikings seem to have stayed at L’Anse aux Meadows for a few decades at most, then returned to Greenland. For such a hardy culture, capable of surviving the harsh northern climate, it may seem strange that they failed in this relatively hospitable place. But experts have a few hypotheses to explain their sudden departure.

Read more about the Vikings here:

One idea is that they were simply driven out by the natives, which they called Skraelings — a problem they never faced in uninhabited Greenland and Iceland. Indeed, this is the reason given by the Saga of Erik the Red. Though trade between the two groups began amicably, the situation quickly devolved, and it seems the Vikings more or less fled in “a great shower of missiles.” After a deadly skirmish with the natives, the saga states, they “were now of the opinion that though the land might be choice and good, there would be always war and terror overhanging them, from those who dwelt there before them.”

Of all the artifacts at L’Anse aux Meadows, only one speaks to the relations between Viking and Native Americans: a single arrowhead lodged in the wall of a house. Even then, it’s impossible to say whether it arrived there directly via bow, or whether it was already in a piece of sod the Vikings later used in building the house.

More likely, a combination of factors forced them to sail back from whence they came. Wallace notes that their home base in Greenland was meager itself, and it may have been unsustainable to use a far-flung colony of just a few hundred to populate an even farther-flung colony. Climatic evidence suggests their retreat also coincided with a cold snap and, likely, an advance of sea ice, making it difficult to travel between Greenland and Vinland. Besides, they were gathering resources from a location almost as far from Greenland as Europe, their main source of trade — without the advantage of proximity, why reinvent the supply chain?

Are There More Viking Sites in North America?

L’Anse aux Meadows, the only proof that Vikings reached North America, matches the description of Straumfjord, the year-round settlement that, according to the Saga of Erik the Red, the Vikings used as a launching point for deeper journeys into Vinland. So if the saga speaks truly — and there’s no reason to think it doesn’t, broadly speaking — a second settlement remains undiscovered.

Hóp (pronounced “hope”) was a seasonal site, farther south, where they collected timber and grapes in the summer. Archaeologists have found no sign of it, but the sagas offer a few clues: Besides grapes, it was rich in salmon, and the natives made boats of animal hide. Based on those criteria, Wallace is confident Hóp was somewhere in what is now eastern New Brunswick, likely in the area around Miramichi and Chaleur Bay. It’s the northernmost extent of the wild grape range, and of the butternut trees whose wood has been found at L’Anse aux Meadows.

Other researchers have proposed locations along the Atlantic seaboard, as far south as Maine, Boston and New York. But wherever Hóp once stood, Wallace doubts any trace remains. As a light, temporary settlement, it likely wasn’t built sturdily enough to be detectable centuries later.

In 2016, Sarah Parcak, a University of Alabama archaeologist who uses satellite imagery to locate buried structures, discovered what seemed a promising lead at Point Rosee on the southwest end of Newfoundland. While digging, her team found iron, but it turned out to be the kind that develops naturally in bogs, rather than smelted. Since then, there’s been no progress in the search.

So, Wallace argues, Hóp may continue to elude us. “I think it would be extremely hard to find any kind of physical evidence,” she says. “And that’s a pity, but I certainly wouldn’t pay for an excavation.”

Nevertheless, archaeologists — amateur and professional — are on the lookout, especially in New Brunswick and Nova Scotia. And whatever they do or don’t reveal about the Norse in North America, one thing is certain: “People love Vikings,” Wallace says, adding that the subject is still ripe for research. Fifty years after she began work at L’Anse aux Meadows, she still keeps up on all the latest scholarly articles. “Every day I find one that is absolutely worth reading.”