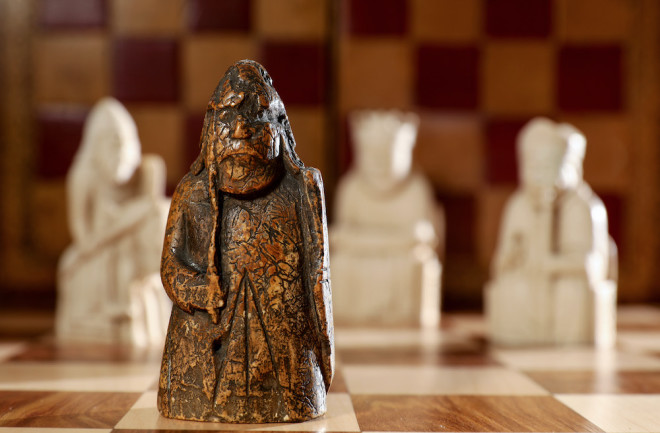 This article appeared in the March/April issue of Discover magazine as "The Walrus Economy." Subscribe for more stories like these.

If you were a wealthy and pious noble person living in Europe 1,000 years ago, there would have been no better way to show off your fortune and your devotion to the Catholic Church than to commission the carving of some piece of holy paraphernalia out of walrus tusk ivory.

The head of a bishop’s staff, a reliquary, and small sculptures depicting religious figures are among the hundreds of walrus ivory artifacts that have been found at medieval sites across Europe. Their discovery provides evidence of a trade network that once extended from the northern edges of North America to the Mediterranean.

The trade was so lucrative that it became the economic mainstay of the Norse colonies in Greenland, which were first established in A.D. 985 and abandoned around 1450. Scholars have theorized that the Norse moved to Greenland specifically to hunt Atlantic walruses, and, until recently, had assumed that the settlers left centuries later because the climate was growing colder.

But opinions are shifting: Studies published over the past five years have built a case that the colonies were abandoned not just due to climate change, but also because the bottom fell out of an increasingly unstable walrus ivory market. So what caused that collapse?

The last written record of the Norse Greenlanders references a wedding in 1408 in Hvalsey Church (Credit: David Dennis/Shutterstock)

In 2014, a team of European scientists began investigating how important ivory from Greenland was to the medieval economy by analyzing walrus bone fragments dating to the medieval period, found at sites across Europe.

“I really didn’t know where it would take us,” says James H. Barrett, an archaeologist at the University of Cambridge and lead author of the study, which was published in late 2019 in the journal Quaternary Science Reviews. Greenland wasn’t the only possible source for the walrus; he points out that it could have come from the north coast of Scandinavia or Iceland.

Walrus snouts and tusks were shipped together as a single “package.” Excavations of medieval workshops uncovered the discarded, tuskless remains, which then could be used for isotope and DNA analysis. (Credit: Courtesy Musées du Mans)

Their tests showed that all the fragments — except those of one lone walrus that may have lived in Barents Sea north of Scandinavia — came from Greenland. Before 1150, the walrus bones came from places close to the main colonies, the Western and Eastern settlements. (See the map on page 58.) But the researchers’ findings show that, in the 1200s, the Norse began traveling farther and farther away from their homes to hunt. Barrett thinks the wealth that walrus ivory brought to the Greenlanders went from being an economic blessing to a curse: By the end, to keep up their supply, hunters had to travel farther north than any European ever had before, ending up in northwestern Greenland and what is now Canada’s Ellesmere Island.

Walrus-ivory carvings spanned the sacred and the secular: The ecclesiastical plaque at left features the figures of Christ, Mary and Peter, while the game piece at right is from a medieval precursor to backgammon. (Credit: Purchase, Stark and Michael Ward Gift, Joseph Pulitzer Bequest, and Pfeiffer and Dodge Funds, 1996)

“This really cranks up the amount of danger they are facing,” says Tom McGovern, an archaeologist from Hunter College in New York who was not part of Barrett’s research team, but has worked at sites across the North Atlantic since the 1970s. He points out that just north of what had been the major walrus-hunting ground at Disko Bay, on the west coast of Greenland, is a large peninsula; traveling the area would have exposed Norse sailors to harsh weather. Then they would have faced dangerous sailing or rowing through Melville Bay — records from 19th-century whaling ships reveal that the sea ice there was notoriously hazardous. The risk to the small boats the Norse were using would have been even worse.

North of Melville Bay, the environment changes completely. The sea currents between northwest Greenland and Ellesmere Island keep the ocean ice-free, creating a kind of Arctic oasis known as the North Water Polynya. This patch of open ocean attracts a variety of birds and sea mammals — seals, whales, and, of course, walrus. “No one thought that the Norse were going that far north,” says McGovern. “I would have said probably on a stack of Bibles that it was very unlikely that the Norse were getting through Melville Bay, at least not on a regular basis. And now it seems like they were.”

Barrett questions whether going to the North Water Polynya would have been sustainable. “The chances of it being viable as a long-term economic strategy is pretty slim,” he says. But it may have seemed like the only option to keep the ivory trade going.

By the middle of the 1200s, elephant ivory became increasingly prevalent in northwestern Europe. As the kingdom of Aragon expanded across the Mediterranean Sea, conquering the Balearic Islands in 1231, ivory merchants regained access to the strait of Gibraltar. This made shipping goods between the Mediterranean and northern Europe much easier, says the University of Pennsylvania’s Sarah Guérin, an expert in the history of the elephant ivory trade. The larger elephant tusks coming from sub-Saharan Africa were more valuable than walrus tusks. That changed how ivory was being used, Guérin explains. “The price is coming down, so the material is not exclusively used for the most sacred purposes anymore,” she says, noting that secular luxury items such as writing tablets and mirror backs started to be made of ivory in the 13th and 14th centuries.

Simultaneously, enameled decorations were becoming a fashionable replacement for ivories, driving the material’s prices down further. A church document from Norway dated 1282 even requests that ivory be converted to gold or silver coin to pay tithes, because it was no longer easy to get a good price for walrus tusk.

Rather than abandon the trade altogether, the Norse Greenlanders seem to have worked harder than ever to get even more walrus ivory to sustain their economy, Barrett’s study shows. “It looked like the intensity of hunting was increasing at exactly that time when, according to traditional wisdom, it should have stopped or hugely decreased,” he says. The walrus bones that his team examined from this era were coming from smaller walruses, often females. While additional ivory from smaller and female walruses may have buoyed the trade in the short-term, the practice would have been far from sustainable in the long-term. The analysis suggests that the animals were being overhunted.

The classic example of such a “resource curse” is the whaling trade. In the 18th century, McGovern says, whalers were hunting blue whales in the Atlantic Ocean where they were close to the cities that were the biggest markets for whale oil. But by the end of the 19th century, most of the large whales were gone. Whalers would instead voyage around the world, killing animals as small as porpoises and walruses for their blubber. The falling price of ivory may have inflicted a similar resource curse on Greenland’s settlements; it’s a problem shared by many modern-day fisheries and other places that are dependent on natural resources for their economic survival, such as gold-, uranium- or coal-mining towns.

The End of an Era

With the most important resource they depended on for their survival being overexploited, and the reward for their increasing risks plummeting, the Norse Greenland colonies may not have been able to support themselves. The colonists would have had to find a new way to make a living.

(Credit: Museum of Archaeology and Anthropology, University of Cambridge)

No written records detail the end of the colonies. In 1721, when missionary Hans Egede established the first European settlement in Greenland since the end of the Norse colonies, he found the stone walls of abandoned buildings and a landscape populated by the Inuit people. It remains a mystery whether the Norse colonists sailed back to Europe or died off in the place where they had lived for nearly 500 years. In either case, it brought an end to an economic system that had previously thrived through harsh conditions.

Despite that end, the impact that the Norse ivory hunters had on the medieval world impresses Mikkel Sørensen, an archaeologist at the University of Copenhagen. Walrus ivory was the backbone of the continental tithe economy, he says. “There was a time when these tusks were as prized as gold and being paid as tribute to the pope and Vatican.”

Zach Zorich is a Colorado-based freelance journalist and a contributing editor at Archaeology magazine.