The Rise of the Akkadians

The world's first empire arose from the Middle East's Fertile Crescent — and created a blueprint that other conquering rulers would follow for millennia. 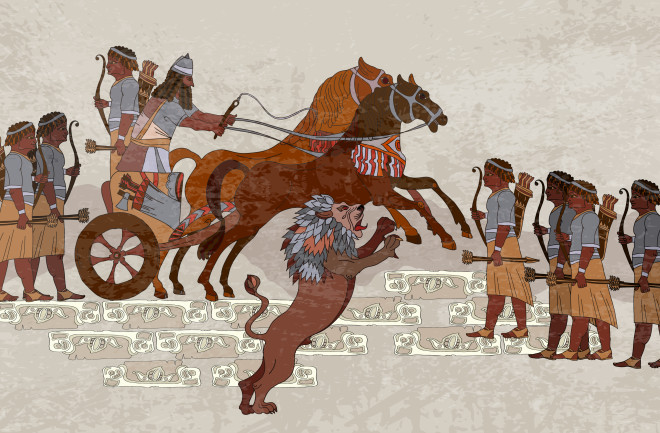 About 4,500 years ago, Sargon of Akkad forged what may be the world’s first empire. This domain was built from a collection of cities that had grown to prominence in the productive bread basket between the Euphrates and Tigris rivers in the Middle East.

The Akkadian Empire only lasted for a short dynasty — at least, depending on how you read the history. But Sargon and his descendants created a blueprint that conquering rulers would follow for millennia, whether consciously or unconsciously, across the world.

“I would happily call it the first empire,” says Dan Lawrence, an associate professor at Durham University in the United Kingdom who studies the ancient Akkadians. “Definitely it’s the first thing of its kind.”

The Fertile Crescent was one of the first areas of the world to domesticate grains. Many cereals we still eat today, like wheat and barley, were cultivated in the area of southern Iraq, western Iran and Syria known as the Fertile Crescent by at least 4500 B.C. Conditions for agriculture were perfect in this area, whether it was in the floodplains near the Persian Gulf or the relatively drier regions to the northwest in Syria.

Around this time, ancient, urbanized cities complete with ziggurats and defensive walls began popping up in Mesopotamia , an ancient Greek term that means the land between the rivers. In the south, Sumerian cities like Uruk — famous from the ancient surviving epic text Gilgamesh — and Ur grew to populations likely numbering in the tens of thousands.

The city of Akkad was also in the northern part of southern Mesopotamia. Though unlike the others mentioned, archaeologists have still not discovered the remains of what became the seat of the region’s first empire. Some believe this may be due to it being buried under modern day Baghdad.

Sometime between 2400 B.C. and 2200 B.C., Sargon served under the king of Kish, another large city in the region. At the time, the would-be ruler was a cupbearer — an important position at the time. From this position of relative influence, Sargon usurped the throne of Uruk, and moved it to his home city, Akkad. He then began unifying the various Mesopotamian cities under the rule of Akkad, a term used to describe both the region and the city.

“The beginnings of [the Akkadian Empire] is founded in mythology,” Lawrence says. Sargon eventually brought together about 20 to 30 of these cities under Akkadian control, as testified by cuneiform tablets preserved in both Akkadian and Sumerian languages from the period. He even conquered some areas in the Zagros Mountains to the west like Susa, capital city of the Elamites.

But the nature of Sargon’s control differed from that of other rulers in the millennia that followed. “When you hear empire, people think of the Roman Empire, or the British Empire— a big red stain across a map,” Lawrence says. Akkad may have had direct control over some Mesopotamian cities, but some researchers also believe the level of control was mainly exerted through taxes akin to a mafia-style protection racket. “Pay up or we will attack,” Lawrence explains.

Even among individual cities, the nature of that control was a shifting tapestry. Several of the 30-odd cities in the empire were usually under revolt at any given time. “What 'empire' means at this point is not totally clear,” Lawrence says. But characteristics of later world empires were already present in Akkad; for one, it was multiethnic, with its subjects speaking a number of languages

Like many empires that followed, Sargon passed the keys to Akkad down to his descendants. His grandson Naram-Sim would take leadership to the next level, in the form of personal deification.

At this time, most Mesopotamian cities had patron gods or goddesses. Uruk, for example, paid tribute to the goddess Inanna, also known as Ishtar, at a large temple there, while Ur’s patron goddess was Nanna. Akkad didn't pay tribute to any particular god that we know of, but then again the city's remains have yet to be found. Lawrence said this may be due to it being relatively newer than its neighbors at this time.

In any case, Mesopotamian iconography usually depicts gods as larger than people —rulers included. But iconography of Naram-Sim shows him much larger than the people around him, similar to a god. “He's sort of taking on those sorts of powers for himself, which is pretty new,” Lawrence says, adding that before the prevailing idea was that kings ruled at the pleasure of the gods.

Naram-Sim's legacy also marks the architecture of the time in other ways; for example, the bricks of a palace in Tell Brak are stamped with his name. Lawrence says other than Tell Brak, the Akkadians didn’t necessarily control much of that area. Stamping his name on bricks may have been a way to increase the appearance of Naram-Sim’s control over the region.

The Decline of the Akkadians

Naram-Sim’s rule was something of a high point for his people. By the time the dynasty’s fifth leader, Sharkalisharri, takes over, the various enemies that Sargon and his descendants had made begin to catch up with the Akkadians.

Historians don’t agree on when — or why — the empire ultimately fell. But a few things happening in the area at the time could have contributed to the downfall of Akkad, which took place by at least 2100 B.C.

For one, groups of outsiders, including the Gutians and Amorites, begin moving into the empire from the Zagros Mountains to the east and Syria to the west. Amorite names begin showing up in positions of power in the cuneiform tablets around this time, leading scholars to speculate that they may have somehow contributed to a shift in the empire's power structure.

Climate also may have played a roll. Geological research has shown a large drought occurred in the area about 4,200 years ago, known as the 4.2 kiloyear event. This drought may have caused conditions unfavorable to the rich agricultural situation that helped Mesopotamia's various cities flourish in the first place. Some researchers say that the loss of crops caused loss of revenue for the Akkadians, precipitating the collapse of the empire.

Lawrence doesn’t necessarily believe this line of evidence, since the dating of the drought isn't precise enough to paint it as the certain culprit of the Akkadians' demise. And while the empire itself fell, many of the cities in the area it occupied persevered. All we know for sure is that a significant drought did happen over the course of several hundred years around this time. In short, it could have occurred at any point from the beginning to the end of Akkadian rule.

For Lawrence, the collapse probably happened simply because this new experiment in large-scale rule eventually caught up with the Akkadians. While he believes they were the first empire, it was still a much looser kind of organization than some researchers like to think. “It’s not surprising to me that it falls to bits because it’s the first empire that’s done this,” Lawrence says. “The fun and interesting thing about it is the ambiguity.”

The experiment in statehood was certainly repeated over the centuries. It’s unclear what happened immediately after the fall of the Akkadian Empire — the names of kings in Mesopotamia are uncertain among ancient texts for the next 40 years or so after the fall of Akkad under its seventh and last ruler, Shu-turul. But a new empire known as the Third Dynasty of Ur would later arise in roughly 2100 B.C., with Ur mimicking Sargon’s formula of unification.