The Real Story Behind Game of Thrones’ Dragonglass

Not just the stuff of fantasy, obsidian chronicles our deep past. 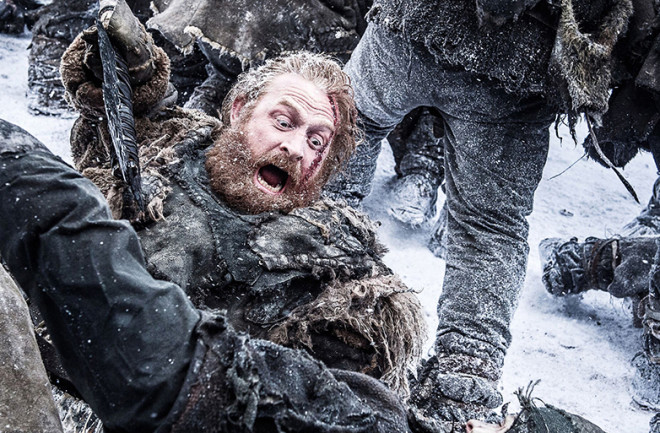 Tormund Giantsbane (Kristofer Hivju) fights an army of the undead with a weapon made of obsidian on Game of Thrones. (Credit: HBO)

Shiny and sharp, obsidian is enjoying a bit of a pop culture moment. It plays a central role in HBO’s hit fantasy series Game of Thrones, now wrapping its final season. Called dragonglass on the show, obsidian is one of only two substances that can cut down White Walkers, malevolent otherworldly warriors.

In the real world, the volcanic glass reveals the human story in a way no other material can.

Our evolutionary ancestors used obsidian for toolmaking for more than a million years. Thanks to the material’s unique chemical attributes, archaeologists can determine the geographical origin of even small pieces. But that’s only part of the story.

Arizona State University archaeological scientist Andrew Zipkin says knowing where our distant ancestors collected obsidian allows researchers to ask much broader questions, such as where early humans traveled, and why.

“It’s easy to source obsidian and determine where it came from, but that’s only the first step, because that’s chemistry, not archaeology,” says Zipkin. “The ultimate goal is to understand what motivated these people to collect it from that location.”

Getting To The Point

Obsidian artifacts turn up at archaeological sites going back at least as far as 1.7 million years ago, when an early member of the genus Homo made tools with it at the Ethiopian site of Melka Kunture.

Around the world, the prehistoric record is littered with obsidian scrapers, choppers and all-purpose hand axes. Early toolmakers likely chose the volcanic glass because it flakes predictably — it can be shaped more easily than other materials — and the result is a razor-sharp edge.

“The fresh edge of an obsidian flake is just a few dozen atoms thick,” says Ellery Frahm, an archaeological scientist at Yale University. “When viewed under a microscope, a steel surgical scalpel would look like a dull and badly abused ax next to an obsidian flake.”

Obsidian is also brittle, a bonus for hunters.

“An obsidian projectile point creates a lot of damage because it’s sharp and also likely to break inside the animal,” says Albuquerque-based geoarchaeologist M. Steven Shackley, professor emeritus at the University of California, Berkeley. He adds: “If you want to create damage, you want to use obsidian.”

The material’s bold appearance — shiny and usually black, though red and other colors occur — may have made it attractive for symbolic or aesthetic reasons as well. Whatever its appeal, early humans sought it out. Despite its frequent use throughout prehistory, the raw material is not common.

“Obsidian is rare most places in the world, and it takes the right kind of volcanic eruption to create it,” says Frahm. “The lava needs to be highly viscous — or sticky — to form glass. A high amount of silica is required to get that sticky lava.”

While this high-silica lava is still below ground, minerals from surrounding rock leach into it, adding different elements specific to that location. When it finally erupts, if it reaches the surface fast enough, the lava will cool quickly and turn into uniform glass before its unique chemical mix has a chance to organize itself into crystals.

“When that happens, all the elements are frozen inside that glass like a snapshot,” says Shackley. “That’s why we can distinguish all these different sources.”

Read more: The Wall of Westeros Would Be Its Own Worst Enemy

Determining the source of a piece of obsidian means analyzing the chemistry of the artifact and then matching it to a database of geochemical signatures unique to individual sources, called flows.

For decades, archaeologists have had few options for that analysis. Most of the equipment is expensive and limited to lab settings. The most precise methods also require destroying the material to be analyzed and, as Shackley notes dryly, “for some reason, people in museums get really upset when you break their artifacts into tiny little pieces.”

That’s why non-destructive X-ray fluorescence (XRF) emerged as the most popular method for sourcing obsidian. Though not the most exacting analysis, it’s particularly good at identifying strontium, rubidium and other elements that are frequently key ingredients in a flow’s signature.

“XRF is a beam technology,” says Zipkin. “It hits the target atom, knocks electrons out of orbit, exciting them, and then, as they drop back down [into normal orbit], they emit characteristic energy that the device measures.”

Lab-based XRF devices have gotten smaller over the years: “The first XRF [machine] I used in the ’80s filled a room,” says Shackley, who is director of the Geoarchaeological XRF Laboratory. “Now the equipment sits on a desktop, a little bigger than a breadbox.” Outside the lab, the technology has seen even more impressive downsizing.

The first commercial portable XRF (pXRF) devices arrived in the 1990s, intended for industrial applications such as exploratory mining and quality control in cement manufacturing. They soon found their way into the hands of many an archaeologist. In those early adoption years, enthusiasm for the new tool’s potential sometimes outpaced scientific rigor, and results were not always reliable.

Methods and standards across the field have since improved, as have the portable devices, which continue to get cheaper and more precise. Today’s pXRF devices — which “look like a combination of a ray gun and a hair dryer,” says Zipkin — run less than $40,000.

“One can put it in a carry-on bag and bring it almost anywhere in the world,” says Frahm. “No longer do we have to request permission to export a few artifacts to a distant lab. Instead, we can work where the artifacts are, whether in a museum, in a field lab, or even at an archaeological site itself.”

He adds: “In only 10 or 20 seconds, we can know where a particular obsidian artifact originated, hundreds, thousands, or even hundreds of thousands of years ago.”

While the tools to determine the source of obsidian become ever more user-friendly, obsidian hydration, a method used to date the material, remains problematic.

A dragonglass dagger from Game of Thrones. (Credit: HBO)

Developed in the mid-20th century, the method takes advantage of the fact that an obsidian surface starts absorbing atmospheric water as soon as it’s exposed to the air. To date the artifact, researchers take a cross-section and look at the hydration rim, a gauge of how far water has penetrated into the volcanic glass.

“It’s a great idea, but it’s almost impossible to put into action,” says Zipkin, who calls the results “really just an educated guess.”

That’s because the speed of moisture penetration is affected by numerous factors, including temperature and humidity. A difference in temperature of 1 degree Celsius, for example, can change the hydration rate by 10 percent; a single event such as a forest fire roaring past the artifact’s location might reset the hydration rim completely.

Most archaeologists instead date obsidian artifacts by context — what else was found with it at the site — and relative dating methods, such as the age of the layer of sediment in which it was found.

As groups of hunter-gatherers moved across prehistoric landscapes, collecting obsidian and leaving behind flakes of it after making or resharpening tools, they created maps of their movement that archaeologists can follow with ever greater precision.

Tracing the paths obsidian traveled with early humans, says Frahm, can reconstruct how people “made use of their surroundings and met their subsistence needs through mobility across the landscape and connections with other groups.”

In 2018 in Science, for example, Zipkin and colleagues published a trio of papers about finds, including obsidian artifacts, at the Kenyan site of Olorgesailie. The obsidian pieces, more than 300,000 years old, came from multiple flows up to 70 miles away: a distance significantly greater than the average territory of hunter-gatherer groups. This means that the obsidian collectors may have either traveled into another group’s territory or traded with them for the material. Both scenarios suggest that humans were cognitively capable of complex social interactions and planning long-distance expeditions more than 200,000 years earlier than once thought.

Obsidian continues to tell us more about not only ourselves, but our closest evolutionary kin.

In February, for example, in the Journal of Archaeological Science: Reports, researchers described obsidian artifacts up to 73,000 years old, made of raw material from the Baksan River valley. The location is the only known obsidian source in the Northern Caucasus — part of a rugged stretch of mountainous land straddling southern Russia and the Republic of Georgia.

The artifacts were found at sites up to 150 miles from Baksan and, based on style, were made by different, culturally distinct groups of Neanderthals. It’s the latest blow to the idea that Neanderthals were less mobile and less capable of networking than early modern humans.

Ekaterina Doronicheva, lead author of the paper and an archaeologist at the Laboratory of Prehistory in St. Petersburg, Russia, says the Baksan obsidian source was probably a zone of contact between different populations: “We can assume the existence of cultural contacts between these regions . . . and that local Neanderthal groups were part of developed social networks.”

As technology improves and archaeologists turn up additional sites, obsidian will remain the glass through which we see our deep history.

“It’s a bit like being Sherlock Holmes,” says Frahm. “We are trying to wring every last bit of information out of these objects that were simply tossed aside in the past.”

Gemma Tarlach is senior editor at Discover. This story originally appeared in print as "The Real Dragonglass."