The Wall of Westeros Would Be Its Own Worst Enemy 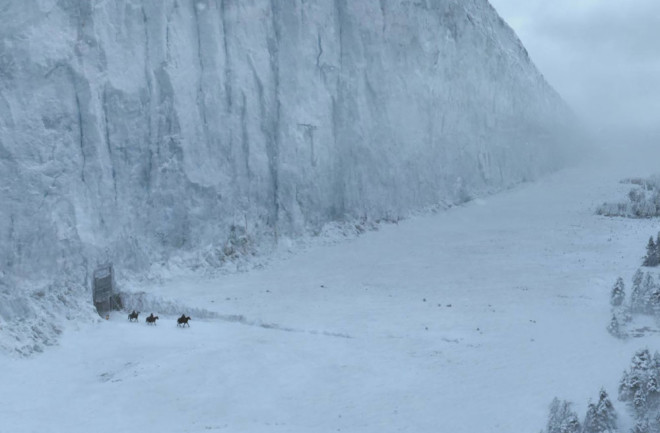 The Wall. (Credit: HBO) The Wall that defends the Game of Thrones universe would need to be made of more than pure ice if it had stood for over 8,000 years. According to the plot of George R. R. Martin's famous book and television series, the massive wall of ice protects humanity from the blue-eyed White Walkers, an ancient race of ice zombies that threaten all living things. But if the wall that shields the realm was made of pure water ice, it would not remain a wall for long; instead, it would quickly become a low hill. Although it's easy to think of ice as rock-hard, it's anything but, especially for a wall reported to be over 700 feet tall. With that in mind, let's dig into the science of big hunks of ice. "Ice flows," says glaciologist and University of Alaska Fairbanks professor Martin Truffer. "The higher the stresses are, the easier it flows, so if you have a wall that high, at the bottom of that, the stresses are so high it would just ooze out like soft butter." Truffer looked at how well the infamous wall would stand up under pressure and found that it wouldn't last long. He presented his results last month at the annual American Geophysical Union conference in New Orleans, Louisiana. According to Martin's series, the giant wall runs 300 miles across the northern face of Westeros. The over 8,000-year-old barrier was allegedly built by Bran the Builder to keep the White Walkers out. The Sworn Brothers of the Night's Watch patrol the Wall, protecting it from the human settlements on the northern side, and watching for the return of the walkers, whose existence have become the stuff of myths and legends. While the Night's Watch are valiant fighters, the Wall is the primary defense for the realm. https://youtu.be/yaZLqhQXB8Y But not a very sure one. According to Truffer, a wall of solid-ice would flow out faster than it could be built, almost immediately oozing into the parabolic shape favored by glaciers. The wall is said to tower over 700 feet high, but Truffer said normal ice would flow down to about half that height. How quickly the ice spreads depends on the temperature — the colder it is, the longer it takes, Truffer said. But it's hard to consider that humans could survive the frigid temperatures that might keep the Wall permanently solid. Even if the annual mean temperature averaged -40 degrees Fahrenheit, the Wall would flow down to half its height in only a few hundred years. Such low temperatures don’t fit with the Game of Thrones landscape, where the forest butts up against the Wall itself. "There wouldn't be any forests growing near there," Truffer said. While it's possible that temperatures dip that low during when winter has come, the warmer summers (which are admittedly still cold up by the Wall) would still cause the Wall to flow to its doom. "It would still be a barrier, but one you could walk up," Truffer said. But all is not completely lost for Westeros. Mixing the ice with rock and dust could help slow the spreading. Truffer didn't examine how that might play out, but he said rock could be good or bad for the Wall. On the one hand, dusty ice deforms easier than its pure counterpart, which would speed up how quickly the Wall became a hill. On the other hand, if ice contains more than a certain concentration of rock, then it doesn't deform as easily. "It's not straightforward," Truffer said. Perhaps the Wall isn't pure ice. Truffer said that a wall of rock covered with ice "would work a whole lot better." "If you wanted to make a wall like that, you would want some sort of structure supporting it," he said. The rock would then bear up much of the ice's weight, keeping it from deforming as easily. In Game of Thrones, tunnels allow the men who guard the Wall to pass from the civilized south to the wild lands of the north. These tunnels create problems of their own, Truffer said. Flowing ice would quickly seal them up. "I think you could actually watch it close," he said. "It would just close as you walk through." If physics won't allow the Wall to stand strong, then something else must play a hand. "There's got to be magic involved," Truffer said. Indeed, magic is hinted at in the fourth book of the series, A Storm of Swords. Spells woven into the wall at its construction help it to stand, and keep the dead from passing through. Perhaps those spells will be enough to save the realm from the White Walkers descending on the wall. Because, as Qhorin Halfhand warned Jon Snow in the novels, "If the Wall should ever fall, all the fires will go out." Editor's Note: An earlier version of this story incorrectly stated the temperature required for the Wall to flow to half its height in 100 years.