The Misunderstood Crustacean: Study Suggests They Do Feel Pain 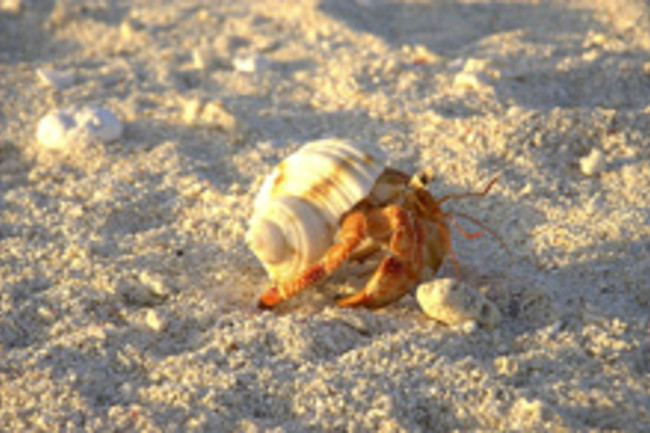 Crabs and other crustaceans not only feel pain, new research has found, but they remember it—and use the experience to try to avoid future shock. For the study, published in Animal Behavior, researchers Robert Elwood and Mirjam Appel looked at how hermit crabs reacted to small electric shocks. Using wires, they delivered the shocks to the abdomens of the hermits who take shelter inside other mollusks' abandoned shells, and found the crabs would scamper out of the shells after being shocked, "indicating that the experience is unpleasant for them," the scientists concluded; unshocked crabs stayed put [LiveScience]. The researchers say their study proves that this response is not just a reflex, but that central neuronal processing takes place [CNN]. The role of pain, according to Elwood, is to allow

. Prior research had shown that crabs can detect and withdraw from harmful stimuli, but it was not certain whether that was a simple reflex mechanism, disassociated from the feeling humans recognize as pain. In one part of the study, the researchers delivered shocks that were just below the threshold that causes a hermit crab to instantly scamper out of its shell, and watched what happened when a new shell was then offered. Crabs that had been shocked but had remained in their shell appeared to remember the experience of the shock because they quickly moved towards the new shell, investigated it briefly and were more likely to change to the new shell compared to those that had not been shocked [CNN]. The observations illustrate a tendency by the crustaceans to weigh trade-offs between meeting certain needs, in this case the quality of shell, and avoiding pain—similar to the way humans make some decisions. Since crustaceans don't have a brain structure called the neocortex that processes pain and stress in humans, some researchers had theorized that creatures like crabs and lobsters can't feel pain. But in another paper not yet published, Elwood and his colleagues argue that crustaceans possess "a suitable central nervous system and receptors"

. Elwood notes that these animals lack protections, but says that if any legislation were to pass regarding treatment of crustaceans, it would be more likely applied to animals only in scientific research, rather than to those raised for food. But the study, he added, highlighted the need to investigate how crustaceans used in food industries are treated, saying that a "potentially very large problem" was being ignored [BBC]. Related Content: 80beats: Fiddler Crabs Meticulously Measure Their Strides to Find Their Way 80beats: Iron-Dumping Experiment Is a Bust: It Feeds Crustaceans, Doesn’t Trap Carbon

These Sea Creatures See Without Eyes — But Only Sometimes