Fiddler Crabs Meticulously Measure Their Strides to Find Their Way 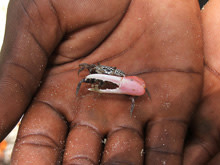 Fiddler crabs take carefully calibrated steps to find their way home, according to a new study in

[subscription required]. Scientists testing the tiny crustaceans' homing skills found that both the length and number of their strides were guided by some sort of internal mileage counter. This allows them to plot a direct path back to their sandy burrows even if the burrows are out of sight.

"We were able to measure every step by every leg of every animal in this experiment, and since these are eight-legged animals, that's a lot," [Scientific American] says

co-author John E. Layne. Many animals appear to have built-in GPS systems, although exactly how they function is not well-understood. Birds and sea turtles may use the position of the stars and the earth's magnetic field to navigate.

The honeybee has been shown to use the flow of the passing landscape across its field of vision. Some other animals may be able to gauge linear acceleration and use that to determine distance [The New York Times]. The way animals keep track of their movements and the distance they've traveled is known as path integration.

sheet of acetate in the path of a crab heading toward its burrow. Crabs took the same number of steps as if they were on a normal surface, but since they made no progress with some of the steps they ended up short of their burrow [The New York Times]. The more slippery steps they took, the farther they ended up from their targets. This showed that the crabs were relying on their leg movements to gauge distance, ignoring visual or inertial cues. But the crabs were doing more than just counting their steps.

"If they took steps that were all the same size, and had that ingrained in their brain, they would convert distance into a number of steps," says Layne..."In fact, that’s not what they do" [Scientific American]. The crabs could take many small steps or fewer big steps, depending on how fast they wanted to move, but the length and frequency of the strides were well-coordinated to cover the same total distance.

Layne says the next step will be to figure out how the fiddler crabs manage such coordination.

One possibility is that sensors called proprioceptors in the animals' legs somehow tally both the number and length of their strides. Other options, he says, are that the brain itself is counting its outgoing commands to move the legs or even that the crabs can measure their own energy expenditure over distance [Scientific American].