The Many Iterations of Iguanodon 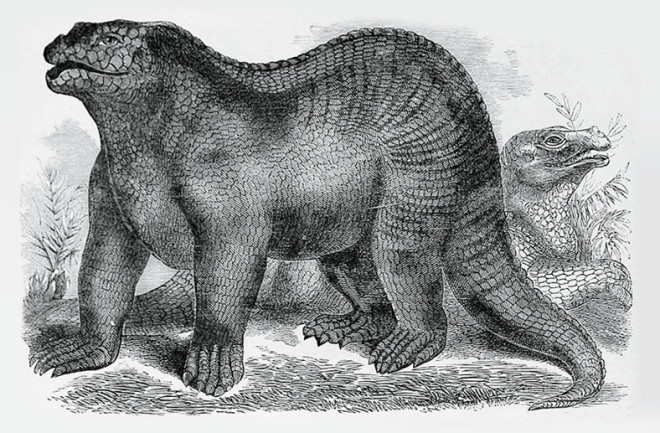 Few dinosaurs have had as many extreme makeovers as Iguanodon. Over nearly two centuries, the herbivore has been imagined as a spike-nosed lummox, inappropriate kangaroo and now, at last, a stiff-tailed, mostly quadrupedal animal.

1825: Only the second dinosaur (after Megalosaurus) to be classified scientifically, the species’s first fragmentary fossils were named by British paleontologist Gideon Mantell for the similarity of their teeth to those of iguanas. In addition to reconstructing Iguanodon as a stout, tail-dragging reptile, early paleontologists placed a finger bone on the animal’s snout. (Fun fact: The individuals Mantell initially described as Iguanodon were reclassified in the 20th century as relatives Therosaurusand Mantellisaurus.)

1851: Dining or dino-ing? A London event held inside a reconstructed Iguanodon was the talk of the town and helped cement the notion of the dinosaur as a tank-like, spike-nosed reptile.

1878: It was one step forward, one step back when several Iguanodon specimens turned up in Bernissart, Belgium. The completeness of multiple individuals confirmed once and for all that the ol’ snout spike was actually a modified thumb. Paleontologists also realized the animals were not dedicated quadrupeds. They overcorrected, however, and reconstructed it in a bipedal kangaroo posture — even though they had to misalign some of the bones to make it work.

1980: The discovery of stiffened tendons along the tail established Iguanodon as no tail-dragger. Other research during this dinosaur renaissance, looking at the inflexibility of its hand and wrist, revealed that Iguanodon spent most of its time with four limbs on the ground, but was capable of some bipedalism.

21st century: Will future Iguanodon reconstructions sport feathers? Stay tuned. Despite having a beak and being an ornithischian, or “bird-hipped” dinosaur, the animal isn’t closely related to the lineage that evolved into birds. However, since 2002 paleontologists have unearthed a couple of other ornithischians with primitive bristle or furlike feathers. Iguanodon may get yet another makeover.