While primates like chimpanzees enjoy plenty of meat-filled meals that they risk their lives for, some of their relatives rarely (or never) stray from veggies. 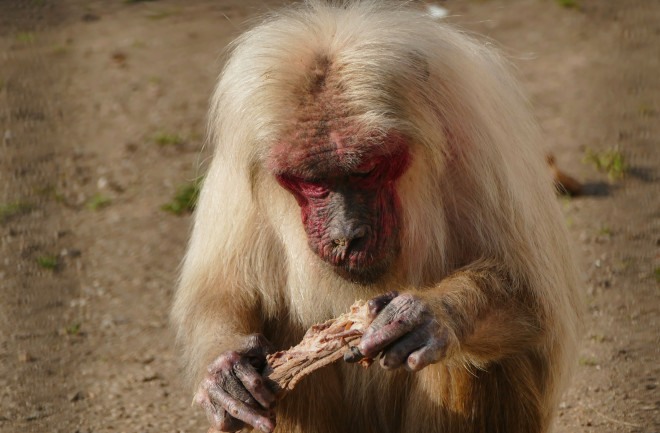 In many ways, a plant-based diet is a safe choice, and this is doubly true if you have to catch and butcher meals yourself. You won't be gored by a broccoli floret, and it’s impossible for a protective mother of a soybean to kick your head in. But for the primates who eat meat, these threats are an unfortunate reality.

Which primates, exactly, enjoy dining on flesh? Most of them, according to David Watts, an anthropologist at Yale University who analyzed over 400 studies of meat-eating among primates in a 2020 review paper. Watts noted that 12 of the current 16 families of primates featured meat-eaters, a total of 89 species. Rather than the exception, it’s the majority — even when meat comes with a potentially violent price.

Consider the safest meat to obtain — the embryo contained in a prey’s egg. Like plants, eggs can’t flee from predators. Still, they can be hazardous to acquire. If you’re not swooped up by defensive parents, you might be mobbed by an entire flock. Or in the case of capuchin monkeys in the Amazon, the eggs they covet aren’t those of a bird, but of a 20-foot-long, monkey-eating crocodilian, the black caiman. Similar to the dragon hoards of myth, capuchins must use their cunning to claim the treasure, and that they do: The monkeys stand on their hind legs and use sticks as shovels to pry the eggs from the nest.

Meat-eating is not only dangerous, but it could also be called unnecessary. Unlike lions and other obligate carnivores, primates can live healthy, happy lives on a plant-based diet of leaves, fruits and nuts (and some do). Individual chimpanzees can go months, or even years, without eating meat.

Even though the pursuit of meat isn’t necessary for survival, and can come at great personal cost to health and safety, it’s still sought out by the majority of primates. Some researchers have argued that meat mainly provides them with energy, while others say it’s primarily a source of protein or vitamins.

These theories can easily apply to chimpanzees and their favorite hunting game, red colobus monkeys. Chimps can gain plenty of immediate energy from eating meat — especially from organs, which are stuffed with fat and provide twice the caloric bang of either protein or carbs. Meat is also “a protein bonanza,” Watts says. “Sometimes they get more protein than they can handle.”

And while vitamins like A and B12 are harder to find in plants, they're abundant in meat. Their rarity, along with the value of protein, go a long way in explaining meat-eating among primates.

Yet dining habits vary widely among primate groups. They can be ranked by the popularity of meat-eating among their members, with burgeoning vegans at one end, and veritable butchers at the other:

There are plenty of primates who, like their cartoon counterparts, enjoy nothing more than a banana. One standout group is the colobine monkeys, a group of African monkeys containing around 61 species, including the black-and-white colobuses. Black-and-white colobus monkeys are so specialized to eating plant matter that their guts have evolved a fermenting chamber, not unlike those of cows, allowing them to munch on lichen and bark.

Gorillas are another primate that shows zero interest in the hunting lifestyle. “Undoubtedly, they eat insects on the plants they’re consuming,” David Watts says. “But no one has ever seen gorillas hunting, or eating vertebrates in the wild.” He describes his time observing mountain gorillas, when a duiker (a small antelope) walked casually into the gorilla group. “If it were a group of chimpanzees,” he says, “they would be eating that duiker, but gorillas are more like, ‘Whatever, let me eat my celery.’”

Most of the animal-sourced protein consumed by primates comes from insects and other invertebrates — they’re small, ubiquitous and easier to subdue. Insect-eating is taken to its limits by most tarsiers (the adorable hand-sized primates with headlamps for eyes) who live exclusively off a crunchy diet of creatures like spiders, beetles and cicadas.

Watts’ paper doesn’t consider insects (or other invertebrates) as meat, though. He defines meat-eating as the ingestion of vertebrate tissue. Out of the true meats, then, the most popular are birds. They're on the menu for 60 percent of the primate species that partake in meat-eating. It’s somewhat cheeky accounting, though, since the category includes nestlings and eggs. However infrequent, when colobines eat meat, they mostly consume eggs.

The callitrichids are a group of tiny, squirrel-sized monkeys native to the Americas with serious little faces. They include marmosets, tamarins and lion tamarins. Callitrichids chow down on the two most popular meats after birds: reptiles and amphibians.

Frogs and small lizards make ideal foods for such diminutive primates and are also enjoyed by squirrel monkeys, blue monkeys and all the Old World Cercopithecines — vervet monkeys, macaques and mandrills.

Meanwhile, baboons, capuchins and chimpanzees are the most voracious meat-eaters of all. They’re also the best studied (which might not be a coincidence).

Baboons are omnivores and diverse meat eaters that commonly engage in active hunting. Researchers have recorded the olive baboon alone (Papio anubis) eating meals like cichlids (a type of fish), snakes, hares, six different species of antelope, and even domestic sheep and goats. As a genus, the baboons prey on over 21 wild mammal species.

Capuchins, those frowning, white-capped monkeys from the Americas, are also diverse and undiscriminating in the animals they eat. They raid nests for baby birds, squirrels and coatis (and the aforementioned black caimans), as well as dining on adult frogs and lizards.

Among all primates, it’s the chimpanzees that consume the most meat — both in terms of the diversity and sheer volume of animals they eat. Common chimpanzees consume a whopping 45 different species of animals and participate in some of the most sophisticated behaviors around hunting and meat-sharing (this may strengthen alliances among males).

As for why common chimps are such voracious meat-eaters, Watts isn’t completely sure. “I wish I had a definite answer to that question,” he says. “They’re omnivores, so they benefit from eating muscle tissue and gaining protein. They’re large, among the largest of the living non-human primates, which means there are quite a few other species that could potentially be prey for them.”

The difference might lie in the psyche, Watts explains. Hunting among chimpanzees is mostly done by males. While females do hunt, and some of them are quite good at it, the activity typically involves multiple males trying to capture prey. “There are important differences between the psychology of male chimpanzees and male bonobos,” he says. “Male chimpanzees cooperate in a lot of ways, while male bonobos really don’t. That might make a big difference when it comes to the challenges of hunting.”