The Great White Shark Is the Serial Killer of the Seas 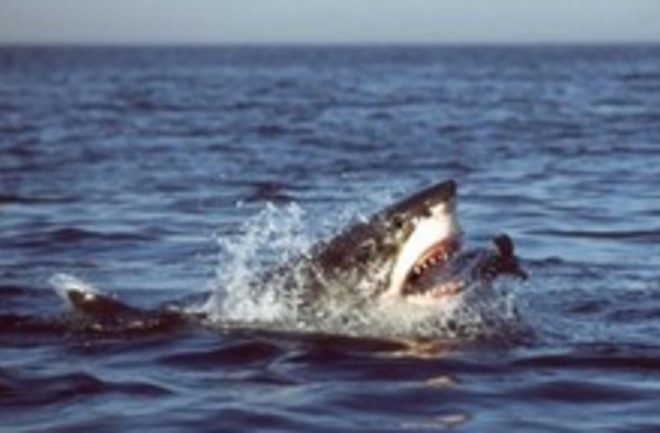 The most menacing predator of the seas has something in common with the most terrifying human predator: A new study has revealed similarities between great white sharks and serial killers. When a great white shark gets hungry, it doesn't simply head for a crowd of seals and pick off the closest one. Instead, the great white lurks in its favorite hunting spot, waiting for a young and unwary seal to venture into the invisible danger zone. Then, it strikes silently from below.

Researchers used a serial killer profiling method to figure out just how the fearsome ocean predator hunts, something that's been hard to observe beneath the surface. "There's some strategy going on," said study co-author Neil Hammerschlag.... "It's more than sharks lurking at the water waiting to go after them" [AP].

For the study, which will be published in the Journal of Zoology, researchers wanted to analyze the hunting patterns of great white sharks near South Africa's Seal Island, and decided to team up

with Kim Rossmo, a criminal justice expert.... Rossmo specialises in the geographical profiling of criminal acts, including those by terrorists and serial killers. For example, by using the locations of a series of linked crimes, such as murder or arson, it is possible to predict the location of a criminal's anchor point, usually a home or place of work [BBC News].

By analyzing 340 shark attacks on seals, the researchers determined

They found that the older sharks, who were the most successful hunters, were attacking from clearly defined anchor points about 100 yards from areas where the seals congregated. At that vantage point they were far enough away to avoid scaring their prey, but close enough to spot a straggler breaking away from the group, and swimming alone into the killing zone. Related Content: 80beats: Rare Discovery About Mysterious, Giant-Mouthed Shark: Where It Winters 80beats: Female Shark Gets Pregnant on Her Own, No Male Required 80beats: Ancient “Big Tooth” Shark Had the Mightiest Bite in History 80beats: Embrace the Sharks, Before It’s Too Late DISCOVER: The Great White's Ways Image: University of Miami