Rare Discovery About Mysterious, Giant-Mouthed Shark: Where It Winters 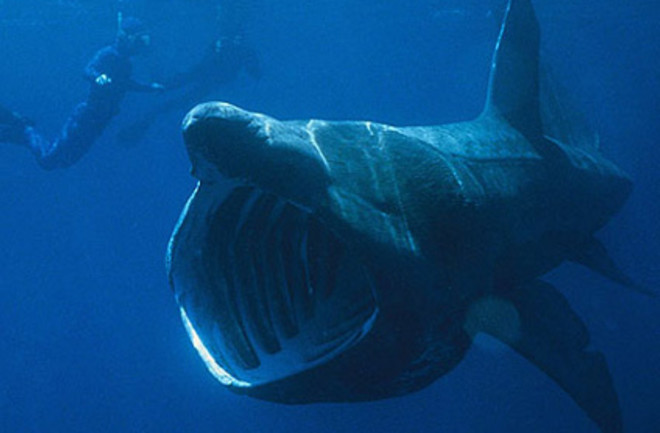 Birds and vacationing humans aren't the only animals to migrate south for the cold months of winter. It turns out that basking sharks do, too. They are the ocean's second largest fish, and live in temperate waters from late spring until early fall. But then they disappear, and until now scientists have only been able to guess where they go--some have even suggested that the sharks hibernate on the ocean floor. To find the real answer, the team tagged 25 basking sharks off the coast of Cape Cod and tracked them as they made their wintertime trip. The researchers found that the sharks headed south [to the Caribbean], some going as far as Brazil [Science News]. The basking shark is a benign behemoth. It swims at about three miles per hour with its four-foot-wide mouth gaping open, filtering through almost 500,000 gallons of water every hour for its plankton sustenance [Wired]. They can grow to 35 feet or longer, but aside from knowing the sharks spend most of their time in temperate waters, scientists have been mystified by these fish for years: no one has ever examined a newborn basking shark. No one has seen a pregnant female. No one knows where the animals give birth [Discovery News]. In the new study, published in Current Biology, the researchers also found that despite basking sharks' tendency to swim near the ocean surface in the spring and summer, the sharks made their winter journeys at depths of 200 to 1,000 meters and stayed at those depths for weeks or months at a time [Science News]. Researchers say that may explain why the sharks have never before been spotted during their southern sojourns. The findings are surprising, since basking sharks were previously thought to spend all their time in cooler waters. "This is equivalent to finding polar bears in Kansas" [Discovery News], said lead researcher Greg Skomal. But it's still not clear what drives the sharks to embark on such a long, depleting journey every year. Skomal hypothesizes that

these migrations might be linked to reproduction, with females seeking a tropical nursery where they can give birth [Nature News]

, while other researchers suggest the sharks may be looking for rich plankton feeding grounds. Related Content: 80beats: Female Shark Gets Pregnant on Her Own, No Male Required 80beats: Embrace the Sharks, Before It’s Too LateImage: Chris Gotschalk