Embrace the Sharks, Before It’s Too Late 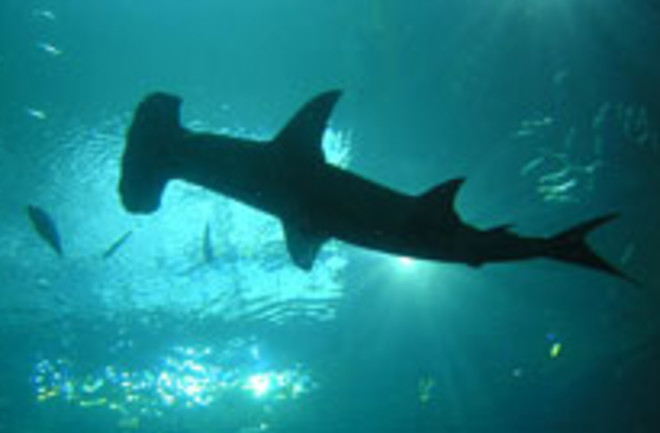 It's not all about the cute fuzzy critters -- we've got to save the toothy, menacing, bloodthirsty endangered species, too. That's the message from a new study, which examined shark populations in the Mediterranean and found a lot to be alarmed about. Numbers of some species have fallen 97 percent over the last two hundred years due largely to overfishing, and researchers say that because sharks have been "much maligned," no one seems to care.[Lead author Francesco]

Ferretti, a researcher at the Biology Department of Dalhousie University in Nova Scotia, said that Steven Spielberg's 1975 film Jaws had given a misleading impression of sharks. "Spielberg has a lot to answer for," he said. "In reality you have about as much chance of being eaten by a shark as you have of winning the lottery twice" [Times Online].

Researchers from the Lenfest Ocean Program used records of shark sightings, fishermen's logbooks, and natural history museum records to put together a picture of the declining populations of 20 species of large ocean-going sharks. Almost all species have had population declines because of coastal development, targeted fishing (for shark fin soup), and unintentional "by-catching" when sharks get caught by fishing gear intended for tuna. But five species are really in trouble. The hammerhead shark, blue shark, thresher shark, and two species of mackerel shark have all seen their populations plummet by at least 97 percent. The hammerhead population is thought to have declined by over 99 percent, researchers say, making them "functionally extinct" in the Mediterranean. It's not just a small tragedy every time a species vanishes from its native habitat, it's also a monkey wrench that can have unexpected consequences to an ecosystem. What worries conservation scientists most is that the disappearance of top predators from an ecosystem can produce unexpected changes. The apparent rise in jellyfish numbers - documented in different regions of the oceans, including the Spanish coast of the Mediterranean - may be partly due to falling numbers of predators such as bluefin tuna and turtles

Conservationists are obviously pushing for regulations to save the sharks, such as rules on fishing gear that would prevent by-catch of sharks and a ban on "finning," the process of harvesting the shark fin and leaving the rest to rot. But even if those laws get passed tomorrow, they might not be enough to bring back the depleted populations. Particularly troubling, the researchers said, were patterns indicating a lack of females of breeding age, which are essential if populations are to recover even with new conservation measures. “Because sharks are long-lived and slow to mature, they need fully grown females to keep their populations reproductively healthy,” said Heike K. Lotze, a study author

The study, in the journal Conservation Biology, comes just weeks after a warning that 11 shark species are in danger of extinction.