The remains of more than 300 ancient warrior women have been unearthed over the years — and more discoveries are likely, researchers say. Here's their story — and why scholars chose to ignore their history for decades. 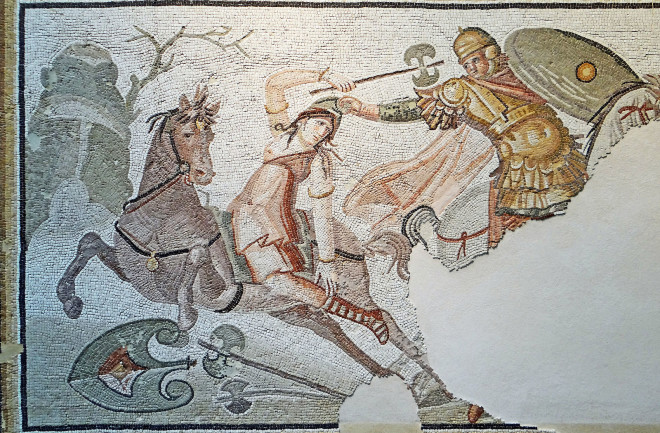 A mosaic depicting an Amazon warrior armed with a labrys, engaged in combat with a hippeus. (Credit: Jacques MOSSOT/CC-by-3.0/Wikimedia Commons)

Penthesilea was an epic warrior, the prodigy of none other than Otrera, the first queen of the Amazons, and Ares, the Greek god of violence and war. Her battle skills were legendary, leading her to side with King Priam in the Trojan war, but she eventually came up against a larger force. Achilles defeated her after a very equally match struggle, according to Homeric tradition.

“As she’s dying, he takes off her helmet and falls in love with her,” says Adrienne Mayor, author of the book The Amazons: Lives and Legends of Warrior Women Across the Ancient World.

Penthesilea was described as powerful Amazon queen — a group of fierce women warriors that matched men in strength and skills. They fought on horseback, were excellent with a bow and were great hunters. Whether Penthesilea was a real, historical figure or not, the ancient Greeks were fascinated with the idea of strong female warriors. Heroes like Hercules and Theseus also fought Amazons — the latter even married Hippolyta, another Amazon queen and a sister of Penthesilea, and went with him to Athens. Amazons often figure on vases and other Greek crafts and artwork.

“Maybe it was a way for the Greeks, who had a very male-dominated society, to imagine what it would be like to have a society ruled by women,” Mayor says.

But no written testimony survived from the Amazons themselves, leading many to discount their existence — possibly due to a sexist belief that women couldn’t have fought and hunted like men. “For a long time historians and classical stories thought that the myths of amazon were just pure stories,” Mayor says.

At least until archaeological techniques began to advance starting in the 1970s, when a number of female warrior graves were identified in Central Asia that might well correspond to the legendary Amazonians.

The Greeks believed the fierce, horse-loving women came from exotic lands to the northeast of Greece, an area that many researchers now believe corresponded to Scythia — a vast territory stretching roughly from north of the Black Sea in the west to Mongolia in the east.

The Scythians weren’t a unified culture as such — the nomadic steppe tribes that lived in Scythia probably spoke a variety of different languages from roughly the 8th century B.C. to the end of the 5th century A.D, Mayor says.

A lot of graves had been discovered by archaeologists dating to this time in this huge region, but it wasn’t until the 1970s that archaeologists began to discover that some Scythians buried with weapons and horses were women. Some had clear battle injuries, and some women were even buried together — one case in western Russia even seemed to display three generations in a shared tomb.

She says that many of the early images the Greeks made of Amazons often portrayed them more like Greek women. But as time went on, the images began to portray Amazons that looked more like Scythians on horseback with bows, probably as the Greeks began to come into contact with the nomadic cultures of Scythia.

“They are dressed like the women we find in the graves,” Mayor says.

The Greeks weren’t the only ones who wrote about these women. Amazons were mentioned in texts from the Persians, Egyptians and Chinese, but their accounts differed a little. The Scythians didn’t have their own writing system, so most of what we know of them comes from the other cultures that surrounded them. While some of these accounts may have some truth in them, most reflect more about the culture that wrote the account than the Scythian women themselves.

The narrative the Greeks used typically involved a male hero overcoming an Amazon, for example. “They couldn’t really imagine anything other than a zero sum game,” Mayor says. “The battles are always depicted as very suspenseful,” she adds. “Of course you’re not going to tell stories in Greece about foreign women beating your heroes.”

Persian, Chinese and Egyptian accounts told of conflicts and trade with Amazons but the stories are a little more realistic, with more evenly-matched fights that eventually resulted in alliances. The Great Wall of China was built to keep nomadic tribes from the step. While the word “Amazon” itself first appears in Greek accounts, it’s not a Greek word, and some linguists believe the word may be linked to the Persian “Hamazon,” which means “warrior.”

Egyptian papyrus fragments tell a tale of an Egyptian king, Pedikhons, who fought an Amazon queen Serpot for three days before they become so exhausted they form an alliance.

These myths would persist for centuries — the Amazon River’s name even came from reports heard by European colonial explorers about egalitarian tribes in South America.

Some Greek accounts were more believable than others — one myth holds that the women would cut off one of their breasts to facilitate spear throwing and drawing bowstrings. Some Amazon statues and other depictions still show one-breasted Amazons, but even ancient Greek historians disputed this idea as ridiculous, Mayor says.

The Greeks, as a predominantly male-dominated society, were fascinated by the concept of an egalitarian society, or even a female-ruled society. We haven’t yet necessarily found evidence that Scythians were all-female or female-ruled, but Mayor says that given the nature of Scythians, it’s possible some tribes had lost many men to battle, and may have been mostly female, at least temporarily.

For a long time, archaeologists wanted to ignore the Greek stories, writing them off as nothing more than fantasy. “I think male historians and classicists may well have discounted any kernels of truth in ancient Greek tales of Amazons due to sexism,” Mayor says.

Despite leading Greek historians and philosophers like Herodotus and Plato mentioning women in the Black Sea and Caucasus region living similarly to the mythical Amazons, Mayor wrote in a follow up email that some modern scholars “prefer to claim that Amazons were invented by Greeks to be defeated by male heroes, or that the Amazons were merely symbols of ‘others’ — ‘monstrous women who refuse to marry.’”

But Mayor says that more than 300 ancient warrior women have been unearthed dating to Scythian times in the past few decades. And more discoveries are likely.

“It is baffling to me that some scholars still hold this outdated opinion that Amazons were purely symbolic despite the archaeological discoveries of armed females across the steppes,” she says.

It’s unclear why the Scythians disappeared, if they ever really did—nomadic horse culture continued in parts of the region, just in different names—the Mongols are just one example.

“There were strong women among the steppe nomads during the time of Genghis Khan,” Mayor says.

The spread of Islam in many parts of what used to be Scythia starting in the 7th century may have affected the status of women in nomadic tribes in the area, but relics of egalitarianism persist even today in areas of Tajikistan and Kazakhstan, Mayor says.