The Fall of the Aztec Empire: What Really Happened in the Battle of Tenochtitlan?

On August 13, 1521, the capital city of Tenochtitlan fell after a two-month siege — a victory that marked the end of an empire. But five hundred years later, researchers are giving stories surrounding the events another look. 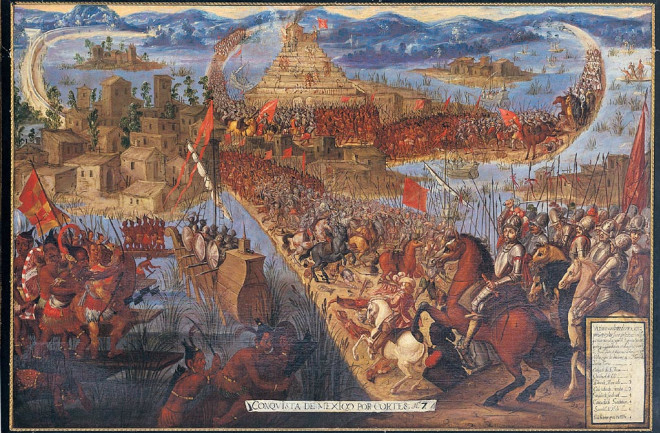 In 1521, Spanish Conquistador Hernán Cortés completed the invasion of Mexico’s most powerful empire. His glorified tale starts out with just a few hundred Spaniards landing near Veracruz on the Gulf of Mexico, and includes everything from the supposed betrayal of a Nahua women against her own people to the Spanish overcoming a vastly larger Aztec army in one of the biggest cities of the world at the time.

The problem is, five centuries after the Aztec capital toppled, researchers are reexamining the narrative of Spanish conquest of Tenochtitlan that comes mostly to us through the eyewitness accounts of Cortés’ soldiers, an account by historian Francisco López de Gómara based on interviews with Cortés, and the latter’s own letters.

“All of this is really just Spanish men aggrandizing their own story,” says David Carballo, an archaeologist at Boston University who studies the Aztecs.

A combination of Indigenous accounts preserved in various codices and reading between the lines of the Spanish accounts is revealing a more nuanced story in which the Spanish heavily depended on Indigenous allies like the Tlaxcalans and the Texcocans who were also searching for an opportunity to put an end to Aztec hegemony in the region.

“It was always about Cortés building alliances,” Carballo says.

Cortés first landed near Veracruz on April 22, 1519—Good Friday—with a force of a few hundred Spaniards. Shortly before his arrival there, he had landed and fought against Indigenous Maya to the southeast of Veracruz, resulting in a truce. The Maya presented slaves to Cortés, including a woman named Malintzin, sometimes known as Marina or La Malinche in Spanish—a Nahua woman that could speak the Aztec language as well as some Maya languages. “She knew courtly Nahuatl, the language of diplomacy,” Carballo says.

Geronimo de Aguilar, a Franciscan friar that got shipwrecked and captured by Maya years before, had also joined Cortés. The Franciscan had lived for years among the Maya as a slave and eventually as a warrior, and could speak some of the Yucatec Mayan languages, translating between Malintzin and Cortés.

Shortly after they landed, Cortés scuttled his boats. Diego Velasquez, the governor of Cuba, tried to stop Cortés’ expedition as he coveted the glory of conquering the purported wealthy kingdom to the west for himself, and had approval from the Spanish crown to do so. Velasquez had initially ordered Cortés only to explore and trade on the mainland, which was still suspected of being an island at that point anyway. When Cortés’ intentions became clear, he scuttled the ships to stop any of the troops he had loyal to Velasquez from escaping back to Cuba.

The Enemies of My Enemy

Malintzin and Aguilar quickly went to work translating with some of the local Totonac people, who were happy to rebel against Aztec tax collectors in the area. The Totonac also informed him about the Tlaxcalans—enemies of the Aztecs who might serve as potential allies, Carballo says. Some Totonac also joined the Spanish as scouts, leading the otherwise clueless Spanish through the unknown geopolitical landscape of early 16th century Mexico.

“[Cortés] was being coached all the time by Native peoples themselves,” Carballo says.

Nonetheless, the Tlaxcalans weren’t initially convinced. In 1519 they fought against the Spanish for about 20 days before coming to a truce in the interest of overcoming their Aztec enemies and elevating their own kingdom.

Carballo notes that the Indigenous people at this time had a vastly different understanding of war. Despite the portrayal of Aztecs as bloody conquerors who sacrificed huge masses of people, most battles had low casualties when compared to European wars with thousands, or tens of thousands of deaths. Mesoamerican empires were mostly about indirect political control. They would tax subjects but mostly leave them to their own devices as opposed to the European method of religious conversion and colonization.

“They weren’t trying to micromanage other cultures,” Carballo says.

So when the Tlaxcalans allied with the Spanish, they likely just saw the Europeans as another force on the landscape that could help them achieve their own goals, rather than a force seeking total domination over the region.

Tlaxcalan forces added about 10,000 to 20,000 warriors to the roughly 500 Spaniards at this time. They tested their alliance initially against Cholula, a large Aztec-controlled city-state with one of the two largest pyramids in the whole region and an enemy of the Tlaxcalans, burning and razing the city and massacring thousands of people.

After the massacre of Cholula, Cortés and the Tlaxcalans made their way to the Aztec capital, Tenochtitlan—the site of modern-day Mexico City. Some sources claim that the Aztec leader, Moctezuma II, was someone ineffective at dealing with the situation. He invited the Spanish in as part of a peace offering, though there is a lot of debate over why the Aztecs welcomed Cortés and the Spanish in, Carballo says.

The Europeans remained there for about eight months. “Things go south in many different ways,” Carballo says. Cortés kidnaps Moctezuma II and keeps him in his own quarters well into 1520. Carballo says that some sources consider him becoming something of a Spanish puppet at this point, though others believe that he was still trying to control the situation, as the Spanish concept of domination and empire building didn’t really match well with his Mesoamerican understanding of politics.

Cortés left to fight a force sent by Velasquez from Cuba to stop him, ambushing them then recruiting the survivors to their cause with promises of riches and land in the region. By the time Cortés and a force of several thousand Spaniards and Tlaxcalans returned to the capital, the situation has deteriorated even more. Sources vary greatly on what happened in this period, but some Aztec leaders begin to rebel against the Spanish control of their capital after the Spanish massacred Aztec nobles in the city’s Great Temple. Moctezuma II is killed shortly after—the Spanish sources claim a crowd stoned him as he spoke while the Aztecs point the finger at the Spanish.

In any case, the Spanish and Tlaxcalans retreated from Tenochtitlan as the whole city rose against them. Hundreds were killed in their escape through the narrow causeways through Lake Texcoco that surrounded the city, and many more were wounded by the time they reached Tlaxcala.

The second Spanish force Velasquez sent at this point did its true damage. Small pox began to tear through the region, eventually claiming the life of Moctezuma II’s successor, Cuitláhuac.

“Now the native population was being devastated by disease,” Carballo says.

Cuauhtémoc ascends to the Aztec throne and puts up a much stronger resistance than his cousin Moctezuma II had, as the Spanish and more than 10,000 Tlaxcalans begin to conquer or ally with various Aztec-controlled cities. Cortés then took the canons, masts and rigging from the boats they had scuttled in the Gulf, and created new ships to launch against Tenochtitlan from Texcoco, an Aztec city they had allied with. This alliance was key, since without Texcoco’s cooperation, the Spanish couldn’t have brought the unheard of European-style naval warfare and siege weapons against the Aztecs, Carballo says.

By August 13, 1521, the Tlaxcalans and Spanish finally succeeded in toppling Tenochtitlan and the neighboring Aztec city of Tlatelolco.

But the Spanish had a long struggle ahead of them. While many erroneously consider the fall of Tenochtitlan as the end of the Mesoamerican invasion, the Spanish’s struggle in the Americas was really just beginning. It took them decades to beat the Chichimecs around the Zacatecas region, and they didn’t conquer some of the Maya city states until the end of the 17th century.

The alliance ended up working for the Tlaxcalans for a while, as they were relatively insulated from colonial interference. They enjoyed autonomy within the new Spanish colony for some time—the modern day state of Tlaxcala still maintains the general borders of this historic region, Carballo says. Tlaxcalans even accompanied the Spanish in their war to conquer parts of what is now the U.S. Southwest and even as far as Philippines in Asia. “They continued to be key allies,” Carballo says.

Figures like Cortés were once glorified, but Mexican national identity has progressively trended towards a contrasting perspective since independence from Spanish rule. As we hit the 500th year anniversary of the fall of Tenochtitlan, more researchers are starting to question the old narratives of the conquest. Malintzin, for example, has gone from Doña Marina, a Spanish rendering of the indigenous name of the hero that helped the glorious Spanish conquest, to La Malinche, the traitor that sold out the Indigenous people. The latter incarnation of her name still carries an insulting connotation in Mexico today. But Carballo notes that all of these approaches tend to ignore the fact that the Indigenous woman was gifted as a sexual slave with limited options in her life.

Other historians no longer speak of the conquest of the Aztecs, but rather the Spanish invasion. Millions of people today still speak Nahuatl, the language of the Mexica, or Aztec. “Conquest implies finality,” Carballo says. “We need to recognize the resilience of Native peoples today as well as the harm brought to their ancestors through European invasions of their lands.”