As Tonga recovers from the double disaster of a massive eruption and tsunami, volcanologists begin to piece together just how large this eruption was. 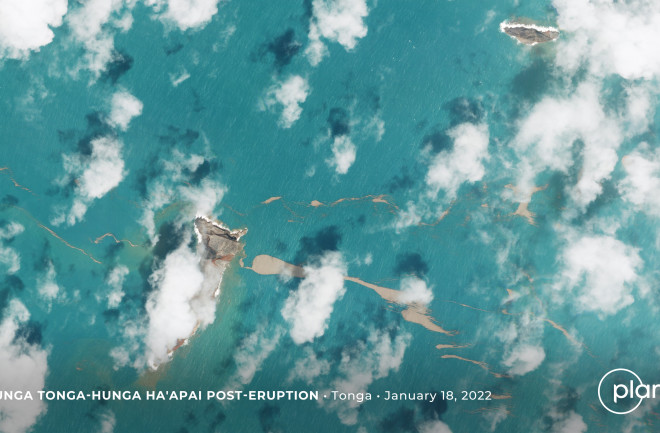 All that remains of Hunga Tonga-Hunga Ha'apai after the January 15, 2022 eruption. Streaks of pumice rafts cross the area as well. Credit: Planet, January 18, 2022.

When Hunga Tonga-Hunga Ha'apai unexpectedly exploded unlike any volcano is decades, the only information we had was from satellites. The tsunami and eruption knocked out most communication between Tonga and the outside world as undersea cables were damaged, airports were covered in ash and infrastructure destroyed. We are now beginning to get a better sense of what happened and how big this blast was.

Images of the volcano after the eruption show that little remains of the main island. Instead, two small promontories stick out of the Pacific. In an image from Planet (above), large biege pumice rafts can be seen -- products of this massive eruption. Other images from UNOSAT using Pléiades images captured the destruction of the tsunami waves that ran up the shore as high as 50 feet (15 meters).

First off, a word of warning: estimating the size and power of volcanic eruptions is tricky. You need to measure ash deposits, look at changes in the volcano's shape, collect all the data you can about the height of the ash column and the composition of the material that came out. All of this can't be done quickly, especially when the volcano is mostly under the surface of the ocean. It might be years before we fully map out what happened at Hunga Tonga-Hunga Ha'apai with sonar mapping or ROV exploration of the caldera.

Just How Big Was It?

The massive area of discoloured water from the Hunga Tonga-Hunga Ha'apai. Most of the light coloured waters saw significant ash and pumice fall during the January 15, 2022 eruption. Taken January 17, 2022 by Aqua. Credit: NASA

However, we can make some initial estimates about the eruption ... and it was a doozy:

Damage across one of the islands near Hunga Tonga-Hunga Ha'apai. Both ash and the tsunami have destroyed homes. Credit: Planet, January 17, 2022.

Probably the biggest question facing volcanologists right now is why the eruption from Hunga Tonga-Hunga Ha'apai was so large and violent. The ability for water to enhance explosivity of eruptions is well known, but we've never seen an explosion of this magnitude caused by interactions with water alone. In fact, this could be the first time we've seen such an eruption: high explosivity but not a lot of magma behind it.

The other big question is exactly what happened at the volcano to cause the tsunami. Most speculation right now focuses on the size of the blast as the trigger for the tsunami, but there could be other events like landslides or the collapse of the island. Once mapping can happen, we might be able to answer those questions.

However, right now the most important issue is helping the people in Tonga. The eruption and tsunami has left the island nation on precarious footing, with need for food and water as well as extensive repairs to almost all infrastructure. The time for understanding the science will come, but right now the humanitarian crisis is the most immediate need.