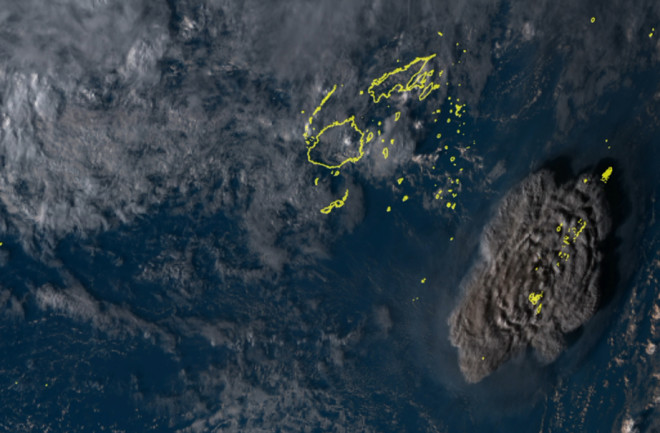 The first major volcanic eruption struck today in the island nation of Tonga. Over the past few weeks, the small volcanic island of Hunga Tonga-Hunga Ha'apai had been experiencing minor but impressive explosions. However, on January 14-15, the eruption became much more violent, sending ash over 60,000 feet (18 kilometers) into the skies. The blast also generated a tsunami that hit many of the islands in Tonga, destroying homes and buildings across the country.

UPDATE January 15, 7 pm ET: News continues to trickle in about this eruption. Current estimates for the ash column put it closer to 100,000 feet (~30 kilometers), which means it punched into the stratosphere. It released a siginificant amount of sulfur dioxide as well. The tsunami that raced across the Pacific Ocean created waves over 3 feet (1 meter) tall in places like Santa Cruz, California and the Oregon coast. There might even have been a "meteo-tsunami" in the Caribbean generated by the pressure wave in the atmosphere. We detected the pressure wave here in Ohio at ~9:45 am ET, with our seismometer also seeing a low frequency (<20 Hz) signal, which could be the shockwave passing the midwest.

Based on what has been reported so far, this eruption might be comparable to the 1982 eruption of El Chichon in Mexico. That blast was one of the largest of the 20th century and registered as a VEI 5. Sentinel-1 radar images of the island suggest most of it has been destroyed by the eruption. It is still early days, though, and without a lot of reports on the ground in Tonga, much of this is speculation. The little video that I have seen suggest heavy ash fall and the skies in total darkness (although when exactly this video was taken is unclear).

The blast was caught in spectular fashion by Japan's Himawari-8 satellite. In this animated GIF (above), you can see the large explosion begin and the shockwave from the blast pass through the atmosphere away from the volcano for hundreds of miles like ripples in a lake. The shockwave was recorded in air pressure as far away as Anchorage having travelled over 5,800 miles (9,200 kilometers) and Florida. You can also see the thin, fast moving surge at the front of the growing cloud. This appears to be possibly the largest eruption in historic record for the volcano.

GOES-17, a NOAA weather satellite, caught the eruption plume forming as well (below). You can clearly see the initial upward thrust followed by the spreading of the cloud laterally as it hit neutral buoyancy in the atmosphere. The eruption also generated a large amount of volcanic lightning.

The eruption caused a tsunami, although right now it is unclear what exactly generated the massive ocean wave. There are a number of different ways that volcanoes can produce tsunamis, including a collapse of an island, massive submarine landslides or the force of the explosion itself as pyroclastic flows are generated by the eruption. Any of these could be the case for Hunga Tonga-Hunga Ha'apai.

Video posted on Twitter show people trying to escape the waves that were over 4 feet (~1.2 meters) as they hit the islands. Most of these waves likely struck within minutes of the explosion. The tsunami was large enough to be felt as far away as Hawai'i, where 1-2 foot waves hit the islands that are ~3,100 miles (5,000 kilometers) away. Parts of the west coast of the United States are under a tsunami advisory as well -- and early indications show flooding in coastal regions of California.

The explosion was loud enough to be heard as thunder over 500 miles (800 kilometers) away in Fiji (and possibly as far as Anchorage!) The grey ash from the eruption fell heavily on the islands of Tonga. Video of eruptions earlier in the day on January 14 (above) showed a towering dark grey plume that turned day to night as the ash filled the sky. So far, no casualties have been reported from this combination eruption-and-tsunami in Tonga, but it remains to be seen if everyone was spared from this blast. It remains to be seen what might have triggered such an enormous blast from Hunga Tonga-Hunga Ha'apai or whether more blasts of this magnitude will follow.