Evacuating hundreds of thousands of people in the midst of spiking coronavirus cases will pose particular challenges. 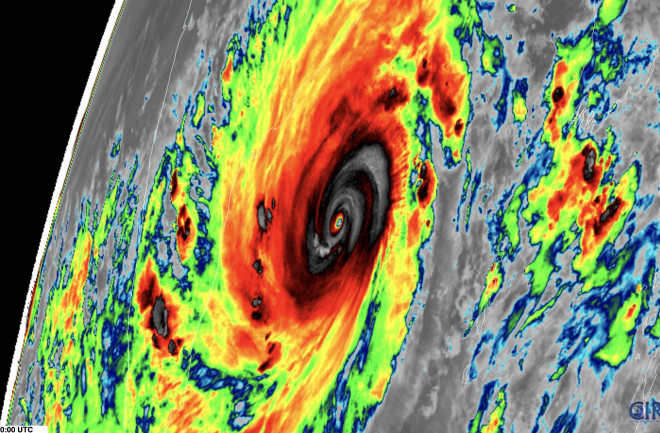 On Monday, May 18, Tropical Cyclone Amphan had a clearly defined eye and was spinning in the Bay of Bengal off the Indian coast with sustained winds estimated at 160 mph. Winds have since dropped somewhat, but the storm continues to pose an extreme threat to coastal areas in India and Bangladesh. Amphan is seen here in an image acquired by the Himawari-8 satellite. (Credit: RAMMB/CIRA/SLIDER)

Even as they struggle to cope with the coronavirus pandemic, millions of people in India and Bangladesh are bracing for Amphan.

The dangerous tropical cyclone is bearing down on the border between the two countries and is expected to come ashore on Wednesday evening, not far from Kolkata. The Indian city of 14 million people is a mere 60 miles north of the coast.

Tropical Cyclone Amphan swirls in the Bay of Bengal, as seen in this animation of images acquired by the Meteosat-7 satellite on Tuesday, May 19. (Credit: CIMSS/SSEC University of Wisconsin-Madison)

The storm, which exploded to Category 5 strength on Sunday, has since weakened somewhat. And its eye is no longer as clearly visible as it was on Monday, when the super cyclonic storm was roaring with winds in excess of 150 mph.

Even so, Amphan is forecast to charge ashore with winds of about 100 mph, according to the U.S. Joint Typhoon Warning Center.

Some 33.6 million people in India, and 5.3 million in Bangladesh, are forecast to be exposed to tropical cyclone winds capable of causing widespread damage, according the Pacific Disaster Center.

But the biggest risk may be from the huge amounts of water Amphan is pushing ahead of itself — with the shape of the Bay of Bengal acting as a kind of funnel that’s amplifying the effect.

The result: Potentially catastrophic storm surges along the low-lying coast at the northern end of the bay, seen in this satellite image of the giant Ganges Delta:

Tropical Cyclone Amphan is forecast to come ashore toward the western end of the Ganges Delta — to the left in this satellite image. Catastrophic storm surges in this low-lying region are expected. (Credit: Sentinel 2 satellite data processed by Annamaria Luongo)

“Although Amphan’s high winds will wreak havoc, and its torrential rainfall will cause inland flooding — a major concern in itself, given the storm’s vast envelope of moisture — the most serious threat posed by Amphan is potentially catastrophic storm surge,” writes Weather.com meteorologist Bob Henson. “Even if Amphan’s top winds weaken further, the storm surge threat will likely remain extreme.”

Dealing with a natural disaster like this would be challenging enough just by itself. But it will occur in the midst of the coronavirus pandemic, complicating things enormously.

On Monday, India reported its biggest one-day spike in the number of confirmed coronavirus cases, with 5,242 more people testing positive, according to the Hindustan Times. Deaths rose to 3,029, up from 2,872 from Sunday.

In India’s state of West Bengal, social distancing requirements are reducing the number of people who can be accommodated in cyclone shelters. Ordinarily, the shelters have room for 500,000 people. But that will now be reduced to just 200,000, CNN is reporting.

The situation in Bangladesh looks better. As many as 5 million people could be accommodated in the country’s impressive network of 12,000 cyclone shelters — even while maintaining social distancing.