Predators that swim after fish all have to accurately track the movements of fast-moving prey, often in murky waters. Different groups accomplish this feat with different abilities – sharks use their keen sense of smell, while seals depend on touch, thanks to their long, sensitive whiskers. Now, two new studies reveal just how good these supersenses are. Fish might not leave any tracks when they swim, but they do leave behind turbulent wakes – even a 10cm long goldfish leaves behind a distinctive flow of water behind itself. While invisible to us, these trails are just as informative to any animal with the right tools to read them. And seals certainly have those – their faces are studded with long, sensitive whiskers that act as motion sensors. At the University of Rostock, Guido Deinhardt has been studying the whiskers of seals for over a decade. In 1998, he was the first to show that seals use their whiskers to detect minute water movements. He later put paid to the idea that this was a short-range ability by showing that harbour seals could use their whiskers to track a mini-submarine for around 40 metres. Now, he’s at it again, blindfolding Henry the harbour seal at Cologne Zoo to test his skill at tracking a more fish-sized quarry. To ensure calm water, graduate student Sven Wieskotten set up a closed box at the bottom of Henry’s pool with a small hole in the side. They trained Henry to stick his head through after they swept a rubber fin through the water. Henry’s task was to indicate which direction it was moving in, and to mask his other senses, his eyes were covered by a blindfold and his ears were covered by headphones playing white noise. Regardless, he could still track the fin very well. After a 5 second delay, his accuracy was hovering around the 95% mark. And even after 35 seconds, he still tracked the fin with an accuracy of 70%, significantly better than chance. Only after 40 seconds did Henry lose the trail. That’s a remarkable achievement – in that time, a herring or a cod could cover around 30-40 metres, so tracking it would be invaluable to the seal. By adding small particles to the water and filming their movements, Wieskotten showed that the moment Henry’s whiskers touched the fin’s wake, it took him just half a second to jerk his head in the right direction. Of course, it’s still unclear how exactly seals “read” the turbulence they encounter. Wieskotten suspects that they can sense the complex structure of the wake, from the central jet of water to the swirling vortices that surround it. He also reckons that seals should be able to distinguish between the trails produced by different fishes, so they can home in on their favourites. That’s a study for another time. 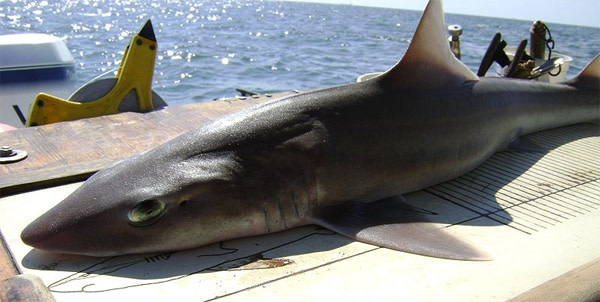 Meanwhile, Jayne Gardiner and Jelle Atema have focused their attention on the tracking skills of sharks. Sharks can famously detect the electric fields of living things, but they also hunt with a keen sense of smell. And it turns out that they can tell where an odour is coming from by working out which nostril picks it up first, even if the smell arrives at the other nostril just a tenth of a second later. Many people believe that sharks are attuned to differences in the concentration of molecules hitting each nostril. But that would only work if underwater smells spread outwards in an even way. In real life, they are carried outwards in turbulent plumes with chaotic patches and swirls. Steering by concentration just wouldn’t work and attempts to do so with a robot only worked under very limited circumstances. Instead, Gardiner and Atema showed that the shark’s skill is all in the timing. The duo fitted a smooth dogfish with headgear designed to deliver the enticing aroma of squid to its nostrils are different times and different concentrations. For delays of anywhere from 0.1 to 0.5 seconds, the shark turned its head towards the side that the smells first arrived from. If the delay was a second long, it might as well have been guessing. And as predicted, concentration didn’t matter. If both nostrils caught a whiff of squid at the same time, the shark turned to either side just as often even if one nostril received 100 times more odour. Gardiner and Atema also noted that when following a smell, dogfish swim at a slow and steady pace of 1 metre per second, less than a third of their top speed. They reckon this is the optimal cruising speed for tracking an odour plume. Swim too fast, and it risks shooting out of the plume before its brain can steer it back. Swim too slowly, and the plume could diffuse before it can be tracked. The ability to track such wafts of smell improves as the distance between the nostrils increases, and Gardiner and Atema suggest that this advantage may have driven the evolution of the distinctive heads of hammerhead sharks. Their wide heads give them excellent binocular vision, but their widely spaced nostrils also allow them to sample a greater area of ocean in search of delectable smells. They could resolve subtler differences between the arrival of smells at either nostril, and they could perhaps swim faster while tracking such smells. For now, that’s just a hypothesis, but the duo are keen to test it by repeating their dogfish experiment on a variety of hammerheads with differently sized hammers. References: Seal paper in J Experimental Biology http://dx.doi.org/10.1242/jeb.041699; and shark paper in Current Biology http://dx.doi.org/10.1016/j.cub.2010.04.053Images: seal by Andreas Trepte; shark by NOAA More on seals and sharks: