The hammerhead shark's head is one of the strangest in the animal world. The flattened hammer, known as a 'cephalofoil', looks plain bizarre on the face of an otherwise streamlined fish, and its purpose is still the subject of debate. Is it an organic metal detector that allows the shark to sweep large swathes of ocean floor with its electricity-detecting ability? Is it a spoiler that provides the shark with extra lift as it swims? All of these [strike]theories [/strike]hypotheses might be true , but Michelle McComb from Florida Atlantic University has confirmed at least one other -the hammer gives the shark excellent binocular vision.

Depending on who you believe, there are anywhere from 8-10 species of hammerheads, whose cephalofoils all have different degrees of exaggeration. The bonnethead (Sphyrna tiburo) has a shape that's more spade than hammer. The scalloped hammerhead (Sphyrna lewini) has a more familiar racing-car-spoiler shape. And the winghead shark (Eusphyra blochii) has the most elongated head of all, up to 50% of its entire body length.

She compared all of these flattened visages with those of two more typical sharks - the lemon and the blacknose. McComb collected her hammerheads by fishing for them off the coast of Hawaii and Florida and housed them in local tanks. She tested their eyes by sweeping arcs of light across them and measuring their responses using electrodes.

She found that hammerhead eyes, though far apart, have the greatest overlap in their fields of view. The winghead shark has a 48 degree arc in front of it that's covered by both eyes, which must give it exceptional depth perception. By comparison, the scalloped hammerhead has a binocular overlap of 34 degrees, the bonnethead has a much smaller one of 13 degrees, and the lemon and blacknose sharks have the smallest of al with 10 and 11 degrees respectively.

And that's if the sharks swim straight ahead with their heads completely still. A hammerhead can improve its stereoscopic vision even further by rotating its eyes and sweeping its head from side to side. McComb measured these movements too by filming the sharks swimming around their tanks.

Taking these movements into account, she found that the binocular overlaps of the scalloped hammerhead and bonnethead increase to a substantial 69 and 52 degrees respectively, still outclassing the 44 and 48 degree arcs of the pointy-headed species. The hammerhead species even have visual fields that overlap behind them, giving them a full 360 degree view of the world. 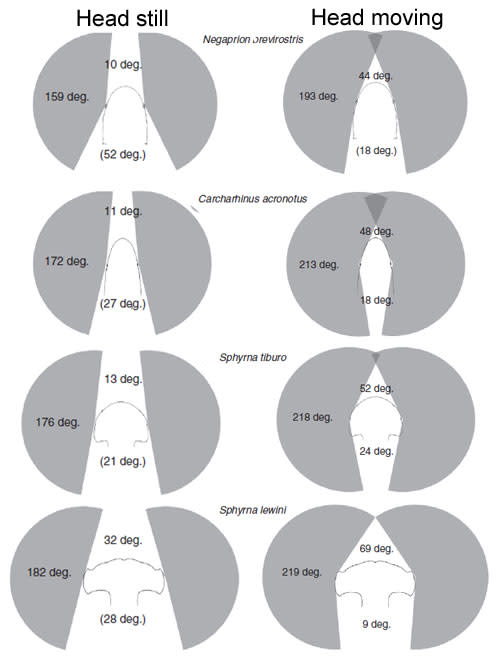 You might think that these visual fields would only overlap some distance ahead of the hammerheads, but not so - their eyes are angled slightly forwards so that ahead of them, their blind spots are just as small as those of sharks with narrower eye-spans. Their main weaknesses are substantial blind spots above and below their heads. Indeed, McComb says that there are some anecdotal reports of small fish giving them the slip by swimming into these regions above and below the hammer.

McComb's results settle a long-standing debate. In 1942, some scientists have suggested that the hammerhead's eyes are so far apart that their visual fields couldn't possibly overlap. Others have argued that the wide spacing actually improves their binocular vision. Despite over 50 years of argument, this is the first study to actually do some measurements with real sharks, and it shows that their binocular vision is indeed improved by their odd heads.