How sharks, penguins and bacteria find food in the big, wide ocean

Some of us have enough trouble finding the food we want among the ordered aisles of a supermarket. Now imagine that the supermarket itself is in the middle of a vast, featureless wasteland and is constantly on the move, and you begin to appreciate the challenges faced by animals in the open ocean. 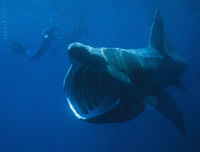 Thriving habitats like coral reefs may present the photogenic face of the sea, but most of the world's oceans are wide expanses of emptiness. In these aquatic deserts, all life faces the same challenge: how to find enough food. Now, a couple of interesting studies have shed new light on the tactics used by predators as large as sharks and as small as bacteria.

At a large scale, predators like sharks and tuna rely on chemical cues to give away the location of their prey. Sharks are particularly expert trackers, but powerful though their super-senses are, they can only come into play within a certain range. Over the large distances of the open ocean, they are more like blind hunters, hoping to stumble across some telltale sign of food.

David Sims from the UK's Marine Biological Association found that many large marine predators use a search strategy called a 'Levy walk', although in this case it's more of a swim. The strategy is formally described by a mathematical equation, but in simple terms, it means that an animal makes several short moves in its search for food, interspersed with a few long ones. The longer the 'step', the more infrequent they are.

In practice, using a Levy walk means that searching a smaller area thoroughly before making a long journey to a completely new one, rather than gradually combing across the ocean. It's similar to someone looking for their keys by focusing on specific corners of a room at a time.

Sims used data from depth-sensitive electronic tags to study the behaviour of five very different marine predators as they dived and surfaced in search of food. Amazingly, all five species - basking sharks, bigeye tuna, Atlantic cod, leatherback turtles and Magellanic penguins - showed the same search strategy, one that was very close to the ideal Levy walk.

Sims believes that the predators use this strategy because it's tailored to the distribution of their prey, such as krill, which tends to be highly concentrated in specific areas and scarce over long distances. With patterns like these, a Levy walk gives a hunter a greater chance of blindly stumbling across some prey than a purely random search.

The strategy isn't universal though. Sims also tested two species, the catshark and the elephant seal, that did not use Levy walks. Nor did a young basking shark, less than a year old, which suggested to Sims that juveniles actually learn the strategy by gaining experience about how their prey is scattered throughout the ocean.

Like sharks, marine bacteria also track their prey with chemical cues and depend on unreliable and unstable food sources. In this case, their meals are the leaked nutrients and waste matter produced by plankton. This organic debris is concentrated in small patches that can be a thousand times richer than the surrounding seawater, but they are prone to being swept away or diluted by currents and eddies.

So unlike the multi-celled predators, marine bacteria have another foraging challenge - they need to reach food sources quickly before they dissipate. To see how they do this, Roman Stocker from the Massachusetts Institute of Technology put an oceanic species called Pseudoalteromonas haloplanktis through a custom-built obstacle course.

Using a technique called microfluidics, Stocker loaded the bacteria into a carefully carved series of microscopic channels and followed their pursuit after nutrients. He injected nutrients into the channels in ways that simulated two common types of oceanic food sources - a burst of nutrients caused by an exploding cell, or the long nutrient plumes that trail behind sinking organic matter - the so-called 'marine snow'.

In both these simulations, the bacteria zeroed in on the nutrients in record time, forming intense hot spots within minutes and well before their food diffused into the surrounding water. In the image on the right, the blue spots are bacteria homing in on a plume of nutrients that is strongest in the white areas and weakest in the black ones.

The key to P.haloplanktis's remarkable swimming speed is a very fast motor that drives its flagellum (its tail). Driven by the need to reach disappearing food, it can reach a top speed of 68 micrometres/s, more than twice as fast as the gut bacterium Escherichia coli, which lives a comparatively easier life constantly surrounded by nutriment. Other species of marine bacteria can even sprint at an enormous 445 micrometres/s, covering more than 200 times their body length in under a second.

Moving at such speed takes a vast amount of energy, for the flagellum's motor is an incredibly inefficient machine and becomes increasingly energetically demanding the faster it turns. Nonetheless, the benefits of reaching food before it disappears must go some way toward outweighing these significant costs.