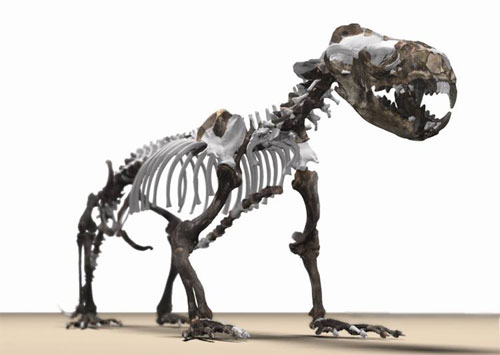 Seals and sea-lions gracefully careen through today's oceans with the help of legs that have become wide, flat flippers. But it was not always this way. Seals evolved from carnivorous ancestors that walked on land with sturdy legs; only later did these evolve into the flippers that the family is known for. Now, a beautifully new fossil called Puijila illustrates just what such early steps in seal evolution looked like. With four legs and a long tail, it must have resembled a large otter but it was, in fact, a walking seal.

Natalia Rybczynski unearthed the new animal at Devon Island, Canada and worked out that it must have swam through the waters of the Arctic circle around 20-24 million years ago. She named it Puijila darwini after an Inuit word referring to a young seal, and some obscure biologist. The skeleton has been beautifully preserved, with over 65% of the animal intact, including its limbs and most of its skull.

Puijila is a massive boon for biologists trying to understand the evolution of pinnipeds, the group that includes seals, sea lions and walruses. It's not itself a direct ancestor, having branched off the evolutionary path that led to modern pinnipeds. It did, however, retain many of the same features that a direct ancestor would have had. "Puijila is a transitional fossil," Rybczynski explains. "It gives us a glimpse of what the earliest stages of pinniped evolution looked like, before pinnipeds had flippers. And it suggests that in the land-to-sea transition, pinnipeds went through a freshwater phase."

This familiar group evolved from land-dwelling carnivores and their closest living relatives are the bears and the mustelids (otters, weasels, skunks and badgers). For other marine mammals like whales and dolphins, the fossil record has given us dramatic visuals for the gradual transformation from land-dweller to full-time swimmer. But for pinnipeds, that transition is much murkier because until now, the earliest known seal Enaliarctos already had a full set of true flippers. Puijila changes all of that.

In the Origin of [strike]the [/strike]Species, the ever-prescient Darwin wrote, "A strictly terrestrial animal, by occasionally hunting for food in shallow water, then in streams or lakes, might at last be converted into an animal so thoroughly aquatic as to brave the open ocean''. This year, on the 150th anniversary of the book's publication, the walking seal that bears his name pays a fitting tribute to Darwin's insight. 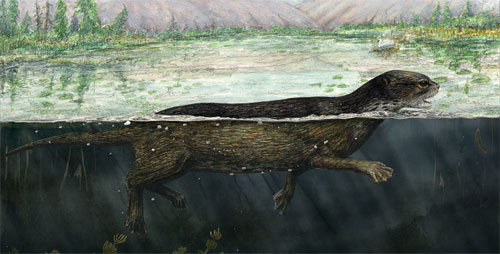 Puijila was just over a metre in length and had a long tail. Its four legs were short but strong, and would have been attached to its trunk by powerful muscles. The bones of its toes were somewhat flattened, which strongly suggests that they were webbed. In many ways, its skeleton was very similar to a modern otter's but the shape of its skull and teeth mark it out as a seal.

As examples, its bottom jaw had four incisors rather than the standard six of other carnivores. And it had a large "infraorbital foramen" - a hole beneath each eye through which whisker nerves would have passed. The wide hole suggests that, like modern seals, this animal had sensitive whiskers.

Based on these features, Rybczynski built a new family tree that included Puijila and other prehistoric carnivores, which rewrote some of their relationships. According to Rybczynski's analysis, Puijila and Enaliarctos belong to a small family of early pinnipeds that also includes Potamotherium (formerly thought to group with the weasel-like mustelids) and Amphicitceps (previously classified with the bears).

Compared to all other pinnipeds, it was the least specialised for life in the water, but it lived at the same time as the distinctly seal-like Enaliarctos. "In its time, Puijila would have been a 'living fossil'," says Rybczynski. It was a relict of a previous body plan that had since been refined for superior swimming.

Rybczynski thinks that Puijila swam using all four of its feet and it wouldn't have been anywhere as graceful as its modern cousins. Most otters swim by thrusting simultaneously with their hind legs and using their long tails. Seals also use their hind flippers by waving them from side-to-side, while sea lions rely on their front pair to fly through the water. Puijila's four-legged swimming stroke represented a style that could easily have given rise to either of the techniques used by today's pinnipeds.

Puijila's discovery also tells us about where the earliest seals may have evolved. It wouldn't have been suited to life at sea and probably lived and hunted in freshwater, suggesting that seals made the transition from land to sea via rivers and lakes. It lived in the Arctic and 23 million years ago, this region was cool and temperate, with freshwater lakes that would have frozen over in winter. Rybczynski speculates that these conditions may have driven the ancestors of seals to experiment with coastal environments. Free of ice, these would have provided them with opportunities to hunt even in the depths of winter.

Update: The Canadian Museum of Nature have developed an entire microsite dedicated to the new find! I'm really impressed - it's got some fantastic detail, great use of Flash and 3D animations. Go over and see Puijila up close. Also have a look at Brian's excellent take at Laelaps.

PS: I guarantee that someone, somewhere will get these details wrong, so two points are worth clarifying: