Scientists Injected Nanoparticles Into Mice's Eyes to Give Them Infrared Vision 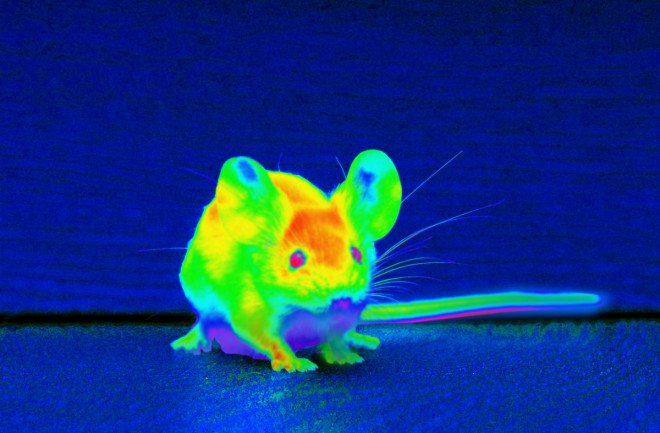 It’s easy to forget it, but much of the world is invisible to us. I don’t mean that in the sense of things being really tiny, or in any metaphorical way. No, most of the world is literally invisible.

That’s because what we call visible light is actually a tiny sliver of the much greater electromagnetic spectrum. The rainbow we see sits in the middle of a vast continuum of wavelengths, including everything from high energy gamma and ultraviolet radiation to much lower infrared and radio waves.

There’s a lot out there we’re missing out on. But, a group of researchers from the U.S. and China have figured out a way to let eyes see these otherwise invisible near-infrared wavelengths of light, no goggles or bulky equipment necessary. Using nanoparticles injected into their eyes that translate infrared photons to visible ones, they say they’ve given mice the ability to see beyond the visible spectrum the rest of us are confined to.

The concept is fairly simple. The scientists used nanoparticles engineered to combine two photons of infrared light into a single photon that mammalian eyes could pick up. The result is that incoming infrared photons with wavelengths (read, energies) of 980 nanometers get translated into photons with wavelengths of 535 nanometers, which sits right around the green part of the visible spectrum. It effectively turned infrared light into visible light inside their eyes. Greening the planet, indeed.

The nanoparticles were coated with a protein that helps them bind to photoreceptors and injected beneath the retinas of mice, where they  grabbed onto the rods and cones that turn photons into neural messages in our eyes.

Once the mice had been upgraded, the researchers put them through a series of tests to see how they would react to their new and expanded perspective on the world. The first test was simply to monitor their pupil contractions in the presence of infrared light, which confirmed that their photoreceptors were indeed picking up on signals from the nanoparticles.

Then, they put them in a simple setup of two boxes connected by a doorway. One box was dark, the other was illuminated by infrared light. As is a mouse’s normal preference, mice with the nanoparticles consistently chose the dark box. But, mice without the nanoparticles didn’t care which box they stayed in — as infrared was the only light available, both boxes looked dark to them.

Further tests found that not only could the mice see infrared light, their perception of it was good enough that they could tell infrared-illuminated shapes apart. For this, the researchers relied on a simple water maze test that challenged the mice to find a hidden platform to stand on. The platform’s location was given by either a circle or a triangle lit up in infrared, and the mice proved themselves capable of discerning specific shapes to find it.

The researchers report their results in the journal Cell.

So, we’re probably all thinking the same thing right about now. They made Predator mice!

The titular aliens have heat vision, and heat vision is infrared, right? Well, kind of. While paper co-author Gang Han, of the University of Massachusetts Medical School, says that the comparison is accurate, there’s a functional problem. Actually, two of them. One, the nanoparticles the researchers injected only picked up infrared photons of a specific wavelength, in the very near infrared. Heat signatures give off photons of much lower energies, far too low for the nanoparticles to pick up on. Han says that nanoparticles that can pick up heat signatures are technically possible, but they haven’t developed them yet.

The other problem with heat vision is that we’re warm-blooded mammals. Even if we did have the ability to pick up infrared photons at those wavelengths, our eyes would be inundated with photons from our own body heat. The resulting noise means that we might end up not seeing anything at all through the infrared static. Sorry about that, bodyhackers.

Science-fiction dreams aside, there are actually some real applications for technology like this, Han says. Nanoparticles that glue themselves to our photoreceptors could one day be used to help treat vision problems, he says, as well as to deliver drugs inside our eyes. He thinks that a similar technique might also be applied to photons of higher energies than we could see, granting the ability to see light in the ultraviolet spectrum as well.

Mouse and human eyes are quite similar, too, so the nanoparticles would likely work in humans with no modifications, he says. The procedure hasn’t been approved by the FDA, of course, but the kind of injection they used is already common, and the nanoparticles themselves seem to cause no harm in the mice. (Han himself says he’d do it “if my spouse says yes…”)

Vision augmented with near-infrared capabilities wouldn’t let us stalk prey through the woods, but it could potentially open up our world in other ways. Seeing new wavelengths of light might add nuance to common vistas, for example, or it might reveal things that previously cloaked themselves in invisible wavelengths.

Stargazing, for one, would never be the same. There are infrared photons streaming down to us from the stars all of the time — astronomers, in fact, often use infrared light to observe the universe.

Turning our eyes to night sky would be an entirely new experience. Stars and galaxies previously invisible would gleam, their electromagnetic transmissions revealed to our naked eyes. It would be a new perspective on the universe, a step, however small, beyond the limitations of our biological senses.