Disputing the traditional theory that they absorb impact, scientists show that woodpeckers’ skulls remain rigid and stiff during pecking. 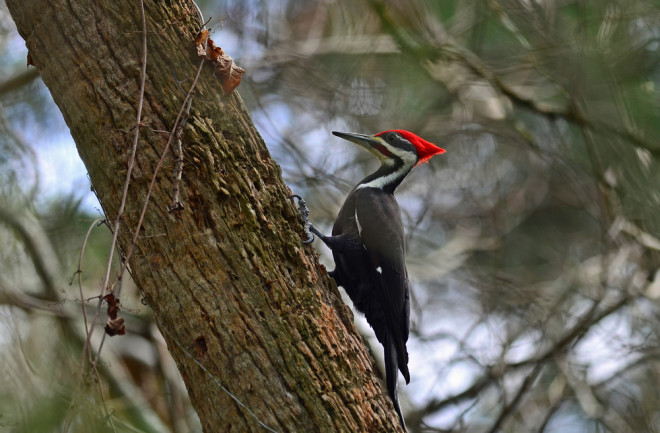 The mechanics behind woodpeckers’ signature behavior has mystified biologists for many years. New research in Current Biology, however, reveals that woodpecker heads remain rigid and hammer-like throughout the pecking process, which contradicts past theories that their heads act as soft shock-absorbers.

Woodpeckers drill into tree trunks for a variety of reasons. They peck to find food, hollow out their homes and communicate with one another in a behavior known as “drumming.” In the face of all this pecking, biologists have hypothesized broadly about woodpeckers’ ability to hammer their heads into the trees without hurting themselves. Over the years, they’ve settled on the theory that a spongy, malleable section of the woodpeckers’ skulls absorbed most of the force of the impact, like a shock-absorbing helmet.

“By analyzing high-speed videos of three species of woodpecker, we found that woodpeckers do not absorb the shock of the impact,” says primary study author Sam Van Wassenbergh of Universiteit Antwerpen, Belgium, in a press release. “This myth of shock absorption in woodpeckers is now busted by our findings.”

Ultimately, the team concluded that shock absorbance was not only absent but would actually impede the birds if present. Any reductions in the power of their pecking would stand in the way of their ability to drill and drum into trees.

More than refuting the traditional theories, the team’s findings also formulate new questions for researchers to investigate. For instance, without the protection of shock absorption, how do woodpeckers avoid hurting their heads?

Researchers found that the shape and size of the woodpeckers’ brains meant that the shocks from their pecking wouldn't reach the threshold of impact to cause concussions.

Woodpecker anatomy, the team says, is all set to withstand the pecking. “The absence of shock absorption does not mean their brains are in danger during the seemingly violent impacts,” Van Wassenbergh says in a press release. “Even the strongest shocks from the over 100 pecks that were analyzed should still be safe for the woodpeckers’ brains.”

The research, the team says, may reveal why woodpeckers are the size that they are. Although bigger woodpeckers with a stronger peck could drill into tree trunks more successfully, they would probably be more prone to concussions. At their current size, the researchers conclude, there’s no danger in woodpeckers continuing to peck away.