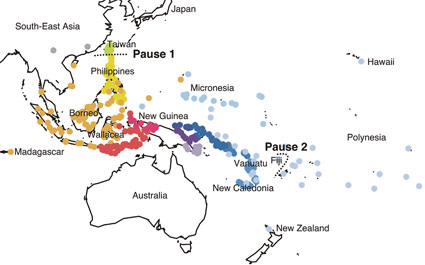 Two groups of researchers seem to have solved the mystery of how and when the first human settlers spread out through the Pacific Islands. One group studied the evolution of a stomach bacteria while the other examined the evolution of language, but both came up with remarkably congruous results.

The evolutionary trajectory implied by words and bugs begins with an initial migration from Taiwan 5,000 years ago, with a first wave of people spreading to the Philippines and a second to western Polynesia [Wired News].

In the bacterial study, researchers took stomach samples from people native to Taiwan, Australia, Melanesia, Polynesia and New Guinea. They

measured genetic variation in Helicobacter pylori, a common gut microbe that traveled with humans when they first left Africa more than 60,000 years ago.... They found that the [bacteria] from people's guts in Polynesia and Melanesia--islands stretching from New Caledonia all the way to Samoa--were genetically similar to the samples from aboriginal people in Taiwan. What's more, the Taiwanese bacteria had more genetic diversity than other populations [The Scientist].

Because genetic mutations accumulate over time, these results indicate that the early Taiwanese people were the ancestors of the other groups that split off over the centuries. In the second of the two papers, both of which were published in Science [subscription required], researchers examined the evolution of the languages used by Pacific people.

The Austronesian language family is one of the largest in the world, including 1,200 languages spread across the Pacific region, Professor Russell Gray said. "By studying the basic vocabulary from these languages, such as words for animals, simple verbs, colours and numbers, we can trace how these languages evolved," Gray said [AFP].

The researchers found that the language group arose around 5,200 years ago in Taiwan. By tracing the subsequent evolution within the language family, they determined that the Austronesian people paused at least a thousand years before moving into the Philippines; they then paused there before moving into Polynesia. The last places to be settled were far-flung islands such as Hawaii and Easter Island, as well as New Zealand (researchers believe the Maori people got there only 700 or 800 years ago).

Research fellow Simon Greenhill said the expansion could be linked to new technology, such as better canoes, and social techniques. "Using these new technologies the Austronesians and Polynesians were able to rapidly spread through the Pacific in one of the greatest human migrations ever," he said [Sydney Morning Herald].

Related Content: 80beats: Once Humans Crossed the Bering Land Bridge to America, Where Did They Go? 80beats: Ancient Phoenicians Left Their DNA in the Mediterranean Gene Pool 80beats: The Vikings Brought Another Group of Invaders to Britain: Mice DISCOVER: Natural Selection Helped Indonesias Find the Perfect Canoe DISCOVER: Did Humans Colonize the World by Boat?