The Vikings Brought Another Group of Invaders to Britain: Mice 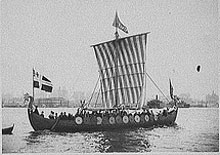 When the Vikings set sail for the British Isles they had small, furry stowaways aboard their ships, and researchers say that the descendants of those mice can offer clues about the voyages taken by Viking seafarers. A new study examined the DNA of house mice throughout the British Isles and found that mice from areas where the Vikings are thought to have settled are genetically distinct from mice in other regions. Says study coauthor Cath Jones:

"We have found that most of the mice in the north of Scotland – from Orkney, Shetland and Caithness – are all of one very similar type that we have named the Orkney lineage and they are very similar to Norwegian mice. And the only explanation for that is that when the Vikings came raping and pillaging to Scotland they took their house mice with them" [Scotsman].

In the study, published in Proceedings of the Royal Society B,

the team looked at mitochondrial DNA (mtDNA) -- genetic material handed down by the maternal line -- found in preserved tissues from 310 mice found in 96 locations in Britain [AFP].

The house mice in the north of Scotland showed clear genetic similarities to Norwegian mice, while mice in the south of England and other regions were similar to those found in Germany. The grain-eating house mouse (more properly called Mus musculus domesticus) is dependent on dense human settlements for food, and therefore serves as an indicator for human migration and settlement. Lead researcher Jeremy Searle says the new mouse genetic information indicates that northern Scotland was largely uninhabited when the Vikings sailed up, and that the Vikings established stable towns there that allowed the mice to proliferate.

Professor Searle said future studies with mice could help document more fine-scale Viking movements such as the colonisation of different parts of Faroe, Iceland and even North America [BBC News].

Learn how modern sailors fared in a recreated Viking ship in the DISCOVER article "The Return of the Vikings," and probe the mystery of why a thriving colony disappeared from Greenland in the article "Vanished Vikings."