Once Humans Crossed the Bering Land Bridge to America, Where Did They Go? 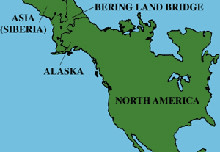 When the first bands of early humans made their intrepid journey into the Americas, they found plenty of room to spread out, according to a new study. Researchers who conducted a genetic analysis of Native Americans say that they can trace their ancestry back to two groups of migrants who arrived in America around the same time, between 15,000 and 17,000 years ago, but took distinctly different routes. The researchers argue that one group moved down the Pacific coastline all the way to the tip of South America, and the other group crossed into North America through an open land corridor between ice sheets and settled near the Great Lakes. Along the Pacific coastal route,

travelers in skin boats are presumed to have hunted marine mammals and found shelter in shoreline refuges beyond the reach of the retreating glaciers.... Movements along the inland route - where big-game hunters originally from Siberia are believed to have migrated through a gap in the glaciers in present-day Northwest Territories and Alberta - led to the earliest mid-continental settlements in the New World, scientists believe [Canwest News Service].

Paleoanthropologists generally accept that the

original colonizers of North and South America came from eastern Asia and migrated to the Americas after spending some time--perhaps several thousand years--in a region called Beringia, which included parts of Siberia and Alaska and the land bridge that once connected them [ScienceNOW Daily News].

But the question of where they went next has been a subject of considerable controversy, with some researchers arguing that harsh climate conditions didn't allow humans to settle in North America until long after the crossing of the land bridge. While the new study isn't likely to settle the argument, it supports the theory that humans quickly spread out over both continents. In the study, published in Current Biology [subscription required], a team led by geneticist Antonio Torroni

analyzed entire genomic sequences of mitochondrial DNA, the genetic material in cells’ energy-generating units that gets passed from mothers to children.... The researchers focused on the disparate geographic distributions of two rare mitochondrial DNA haplogroups — which are characterized by a distinctive DNA sequence derived from a common maternal ancestor — that still appear in Native Americans [Science News].

Both haplogroups appear to have arisen about 16,000 years ago. The researchers found that all the people with the D4h3 haplogroup presently live in South America, while those with the X2a haplogroup live in Canada and the United States, which suggests that the two genetically distinct bands of early humans struck off in different directions around 16,000 years ago. Archaeologist Michael Waters comments

that the genetic study is "very stimulating" and consistent with the "solid archaeological evidence" of human occupation on the Chilean coast and in Wisconsin by about 15,000 years ago [ScienceNOW Daily News].