People Went Crazy for Almond Milk in the Middle Ages

Almond milk was a staple in medieval European cooking, especially during Lent. The ingredient appears in cookbooks starting in the 1200s. Going back even earlier, almond milk was listed as a cough remedy in an 8th century Islamic medical text. 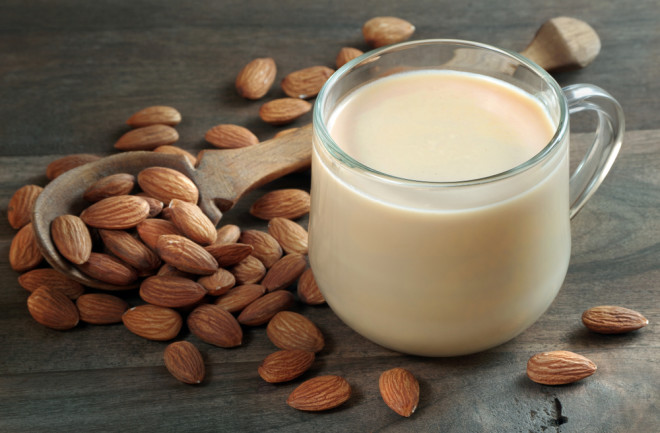 Almond milk is a modern-day fixture of the conscious-eating movement. Of all the non-dairy milk alternatives lining store shelves, almond milk is the most popular among consumers. But the nut milk isn’t just another hipster trend having a moment at your local organic grocery store. This is a beverage with staying power — and we aren’t referring to the carton your vegan cousins left in your refrigerator a couple of months back that still hasn't gone bad.

Almond milk has been a fixture of European cookbooks since at least the 1200s, as it was seen as a nutritious alternative to meat and animal-based milk during fasting periods like Lent. And some research indicates that almond milk’s history might go back even farther in the Middle East.

“The origins are a little obscure. There are people who claim that it came with Arabic cuisine or even Baghdad cuisine,” says Ken Albala, a history professor at the University of the Pacific in Stockton, Calif.

Vahid Karizaki, a historian at Quchan University of Technology in Iran, says one of the earliest records of almond milk occurs in the Al-Risalah al-Dhahabiah, or The Golden Treatise. This Islamic medical text is attributed to Ali ibn Musa al-Ridha, a Shia imam born in Medina, Saudi Arabia, who lived from AD 765 to 818 during the Abbasid caliphate. Even back then, almond milk was described as a healthy food. “Almond milk is recommended as cough treatment and also a treatment for shortness of breath in this book,” says Karizaki.

Almonds continued to be consumed by Iranian people throughout the medieval period, he says. Meanwhile, Europeans began to pick up on the craze. Incorporating nuts in cooking was a novel idea that came to Europe from the Middle East, likely by way of trade and the Islamic empire-ruled Iberian Peninsula.

“The allure of medieval Muslim cuisine had [far-reaching influences] in their entire culture,” Albala says. “Europeans [were] thrilled by the idea of using spices, sugar, rose water and saffron.”

But it’s unclear when exactly almond milk arrived on the scene in Europe, Albala says. Among the earliest mentions of this ingredient in European literature is one of the first modern cookbooks: The Little Book of Culinary Arts, a collection of four surviving manuscripts in four languages that are dated to the 1200s. By the 14th century, almond milk was included in most European cookbooks and remained a fixture of cuisine until the 1600s, Albala says.

Much like today, almond milk appealed to the conscience of its medieval consumers. Modern-day people might look to almond milk as a conscientious alternative to cow's milk, a preference that's rooted in animal welfare or environmental reasons. But Europeans of the past saw almond milk as a way to fill their bellies on fasting days without breaking the rules. During Lent and before feasts, Christians weren’t supposed to eat meat or any animal products by extension. Almond milk was a satisfying substitute.

Almonds and nut milk would have been too pricey for most people to afford, with the exception of those living near almond-growing regions, typically Mediterranean climates with hot summers and wet winters. As a result, drinking it was a social class signifier.

“[Almonds] were a luxury ingredient unless you were somewhere it grew,” Albala says, adding that people in northern Europe especially would have paid premiums.

After the Reformation, fasting rules became a little less strict in Europe. At the same time, European cuisine began to change. Main courses often included both sweet and savory flavors, but this practice began to delineate. Dessert became synonymous with sugar and spice, while main courses typically featured savory fare. Almonds soon only appeared in desserts, and almond milk found little place to exist. People even started to replace almond milk with cow’s milk in the classic dessert blancmange.

By the 17th century, almond milk was disappearing from cookbooks entirely, becoming essentially unheard of until the recent rise of veganism and other dietary trends. But some things truly don’t change. Even today, it’s a beverage enjoyed by those who can afford it.