Parasites can change the balance of entire communities

Conspiracy theories, TV thrillers and airport novels are full of the idea that the world is secretly run by a hidden society. We have come up with many names for this shadowy cabal of puppet-masters - the Illuminati, the Freemasons, and more. But a better name would be 'parasites'. 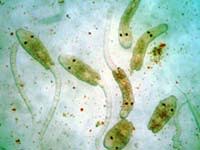 Every animal and plant is afflicted by parasites. The vast majority are simple, degenerate creatures, small in size and limited in intelligence. They affect our health and development, and even our behaviour and culture. And by pulling the strings of key species, parasites can change the face of entire habitats.In a typical school textbook, an ecosystem consists of plants that feed plant-eaters, who in turn, line the bowels of predators. But parasites influence all of these levels, and as such, they can change the structures of entire communities.

The idea that nature is secretly manipulated by these tiny, brainless creatures is unsettling but manipulate us, they do. And by changing the behaviour of their hosts, parasites can change the face of entire habitats. Chelsea Wood and colleagues from Dartmouth College have found compelling evidence for this, by showing that a tiny flatworm can alter the structure of a tidal habitat by infecting small marine snails.

These tidal boundaries of the coastal Atlantic are home to the common periwinkle (Littorina littorea), a type of marine snail. It invaded America's shores about two centuries ago and has spread successfully along the eastern seaboard. It acts as this habitat's equivalent of cattle, grazing the ephemeral algae that grows in rocky tidal pools.

But they are not alone. The periwinkles are unwitting passengers for the parasitic fluke Cryptocotyle lingua, a kind of flatworm. In most parts of the coast, the flukes are relatively rare, but in some parts of New England where seabirds are plentiful as many as 90% of periwinkles can be infected.

Like most parasites, the fluke has an amazingly complicated life cycle. Snails become infected by accidentally eating eggs spread in the droppings of seabirds. The larvae develop in their bodies by eating the snails inside out. They eventually give rise to a free-swimming creature that finds and infects fish, which are then eaten by seabirds, completing the cycle.

By devouring the snails' internal organs, the flukes wreck their hosts' digestive and reproductive systems. Wood reasoned that the neutered and malnourished snails must be have altered feeding habits and tested this idea in the lab and the field. She found that the flukes put infected snails on an involuntary diet, and they ate far less algae than uninfected ones. 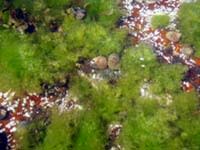 While many parasites can directly alter their hosts' behaviour, Wood believes that nixing the periwinkles' appetities is not part of Cryptocotyle's plan. It's just an incidental side effect of infection and happens because the snails' crippled digestive glands could not cope with the normal amount of food. And because the parasites trashed their reproductive systems and several other organs, they needed less energy to begin with.

Even so, by reducing the snails' feeding, the parasites could potentially affect the entire tidal community. Wood demonstrated this by setting up cages in the tidal zone containing uninfected snails or infected ones. Sure enough, after a month or so, cages that housed infected snails had about 60% more algae than those with uninfected ones.

In the long-term, these effects are likely to be even larger as the fluke castrates its unfortunate hosts and lowers their life expectancy. Over time, this would reduce the size of the whole snail population and give the algae an even greater chance to grow.

These snails' lost appetites ripple out through the entire habitat. Infected snails mean more algae, which provide more food for other invertebrates. The algae also crowd out the rocky real estate that barnacles attach themselves too, and the loss of barnacles reduces the numbers of blue mussels that coexist with them.

Even though it never comes into contact with these other tidal players, the fluke indirectly influences all of them. Nestled within the body of a snail, it pulls the strings of the entire ecosystem. This is one of the few instances where the effects of parasites on ecosystems have been carefully documented. Millions of similar dramas must play out all over the world, for half of the planet's species are parasitic. It's not our world, it's theirs.