This is the fifth of eight posts on evolutionary research to celebrate Darwin's bicentennial.

Life can sometimes be a futile contest. Throughout the natural world, pairs of species are locked in an evolutionary arms race where both competitors must continuously evolve new adaptations just to avoid ceding ground. Any advantage is temporary as every adaptive move from a predator or parasite is quickly neutralised by a counter-move from its prey or host. Coerced onward by the indifferent force of natural selection, neither side can withdraw from the stalemate. 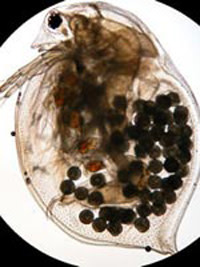 These patterns of evolution are known as Red Queen dynamics, after the character in Lewis Carroll's Through the Looking Glass who said to Alice, "It takes all the running you can do, to keep in the same place." These arms races are predicted by evolutionary theory, not least as an explanation for sex. By shuffling genes from a mother and father, sex acts as a crucible for genetic diversity, providing a species with the raw material for adapting to its parasites and keep up with the arms race.

We can see the results of Red Queen dynamics in the bodies, genes and behaviours of the species around us but actually watching them at work is another matter altogether. You'd need to study interacting species over several generations and most biologists have neither the patience nor lifespan to do so. But sometimes, players from generations past leave behind records of the moves they made. Ellen Decaestecker and colleagues from Leuven University found just such an archive in the mud of a Belgian lake.

The lake is home to a small crustacean called a water flea (Daphnia magra) and a parasitic bacteria Pasteuria ramosa that lives inside it. Both species can undergo dormant states, and Decaestecker found that the lake's sediment preserves members of this sleeping fauna from up to 39 years ago. Every layer of sediment acts as a time capsule, preserving members from previous generations

Decaestecker sampled cylinders of sediment form the lake and revived dormant Daphnia eggs and parasite spores from different levels, representing intervals of 2-4 years. With these, she managed to hatch living Daphnia and pit them against parasites from their past, present and future.

On average, she found that the bacteria infected the water fleas more successfully if they came from the same time period than if they hailed from the past. As time went on, the bacteria picked up new adaptations that made them more effective parasites.

But Decaestecker also found that bacteria from a flea's future were also less infectious than its contemporaries. It seems that the parasites' upper hand is short-lived for the fleas evolve their own counter-adaptations. As the bacteria continue to adapt to the changing defences of their hosts, they trade-off the ability to infect the current generation with their ability to infect the previous ones.

This particular race isn't quite as one-sided as it might appear for slowly. Over time, the bacteria didn't become any better at infecting the water fleas, but those that did caused more virulent disease. They produced more reproductive spores and millions of these take up the fleas' bodies and effectively castrate them. Over time, the reproductive success of the infected fleas fell.