Over the past decade, some coastal waters have started turning red with alarming frequency. The cause is not some Biblical plague, but dense concentrations of microscopic algae called dinoflagellates. Red tides can often contain more than a million of these cells in a mere millilitre of water. Many are harmless and essential parts of the ocean environment, but others produce toxins that can kill local wildlife and risk the health of humans who eat their poisoned flesh. 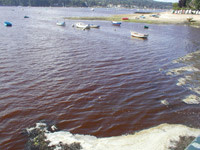 These "harmful algal blooms" are more common in warm waters that mix poorly and are unusually rich in nutrients. Their increasing frequency has been blamed on numerous causes, from natural causes, to agricultural run-offs to increasing sea temperatures caused by climate change. But, as is becoming increasingly apparent in ecology, you're not getting a complete picture of a habitat if you don't know find out what the local parasites are up to.

Aurelie Chambouvet from the Station Biologique found that the algae responsible for red tides are themselves the victims of other parasitic species of dinoflagellates called Amoebophrya. The parasites act as an natural alga-stat that keeps the local algae populations under a tight leash. The red tides are what happens when that leash breaks.

Chambouvet's team discovered the abundance of these parasites by taking water samples from an estuary of the Penze River in northern France over three consecutive years,. They used multi-coloured glowing antibodies designed to recognise and stick to molecules unique to both the host species and their parasites. The fluorescent glows revealed a life cycle that, like those of most parasites, is full of brutality and exploitation.

It begins when a dinoflagellate host is infected by small capsules called dinospores (A), each one just a few thousandths of a millimetre across. These are Amoebophrya's free-living stage, and once inside the larger cell (green dots in B), the spores duplicate their DNA many times over to produce a large cell called a trophont, containing multiple copies of the parasite genome.

This invader gets so big that its host swells from all the pressure (C) and eventually ruptures (D). The trophont matures further into a mobile worm-like form (E), which eventually splits into individual dinospores, each capable of infecting a new host. In its death throes, a single dinoflagellate can unleash anywhere from 60 to 400 dinospores upon its neighbours. The whole process takes just a couple of days. 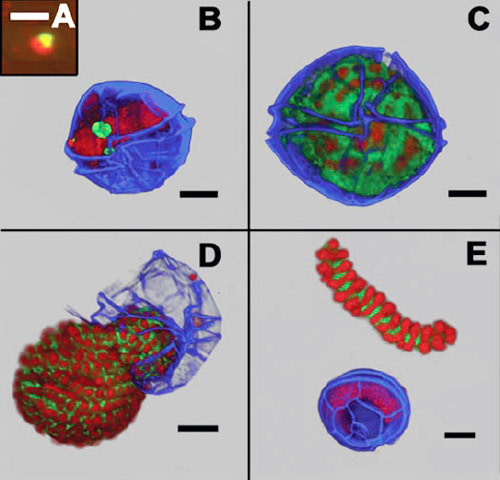 Chambouvet found that throughout the summer, about one in every five algal cells had a parasitic tenant and at times, almost half were infected. This heavy parasitic burden explains the rise and fall of different dinoflagellate species every summer. Between May and June each year, four species of dinoflagellate seemed to take turns at dominating the estuary on a weekly cycle.

These fluctuations had nothing to do with the environment around them - neither the strength of the tides nutrients nor the water's temperature, nutrient levels or salt content had any bearing on the success of the algae. Instead, Chambouvet always detected a surge of dinospores in the water before the population of any one dinoflagellate crashed. The parasites infect their hosts to such an extent that they seriously slash their populations.

But the fact that the four dinoflagellate species rise to dominance in succession suggests that each is exploited by its own specific species of parasite, that doesn't target the other potential hosts. True enough, Chambouvet always detected four genetically distinct species of parasite every year and she proved that at least three of these only targeted one of the local dinoflagellate species.

The dancing partners never swapped; year after year, the same parasite infected the same host. When one dinoflagellate population skyrockets, their parasites multiply too, which crashes the population. That gives other algal species a chance to bloom, only to be taken down by their own parasites. These body snatchers are, quite literally, serial killers.

The parasites' actions keep the algae under a tight leash. One dinoflagellate species Alexandria mimitum (which can poison the flesh of shellfish) was first spotted off the coast of France in 1980s and the first blooms were seen in 1994 in the Penze estuary. The blooms were a regular fixture over the next 9 years, but they soon stopped. Now, they are a rarity, and Chambouvet thinks that the parasites have brought the invasive species to heel. The same checkpoints probably operate all over the world - Amoebophrya and its relatives are found in almost every marine habitat and they infect an extraordinarily wide range of hosts, including marine worms, crabs, jellyfish and even fish eggs.

Chambouvet believes that to create harmful algal blooms, dinoflagellates not only have to find the right environmental conditions, they have to escape the leash of their parasites too. Her results imply that the increasing frequency of red tides around the world may be partially due to events that have disrupted the control that the parasites exert over their hosts. Perhaps they are the result of invasive species entering areas where they have no natural parasites (as in the case of A.minutum). Maybe climate change or agricultural run-offs boost the growth of a species that is normally rare and lacks tight parasitic control.

More on why parasites are amazing: