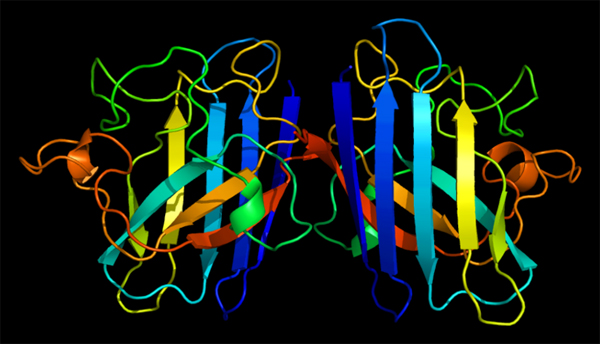 Imagine a villain that corrupts those it touches. It can convert other individuals into twisted doppelgangers that eventually gather to form a destructive legion. This sounds like a character from any one of a hundred comic books, horror movies or science-fiction shows. But this antagonist is real, and it affects the brains of tens of thousands of people every year. It’s a mutant version of a protein called SOD1, and it causes amyotrophic lateral sclerosis (ALS), better known as Lou Gehrig’s disease. All proteins are long chains of amino acids that fold up in acts of molecular origami. This has to happen with great precision – if the protein ends up with the wrong shape, it won’t work properly. Some people have mutant versions of SOD1 that sometimes fold incorrectly. These deformed proteins have a habit of clumping together and – in mice at least – the symptoms of ALS get worse as the clumps get bigger. These misshapen versions of SOD1 probably cause around one or two in every hundred ALS cases. Now, Christian Munch has shown that deformed SOD1 can corrupt normal versions of the protein that have the same mutation. It can travel from cell to cell, spreading its twisted shape with evangelical fervour. In this way, SOD1 is a lot like prions, the infectious proteins behind mad cow disease, CJD and scrapie. Prions are misshapen forms of a protein called PrP. Like mutant SOD1, they can also convert normal proteins in their own image and they can cause brain diseases by gathering in large clumps. Munch found that the malformed SOD1 proteins can move from cell to cell with surprising ease. He tagged them with a glowing molecule, and watched as the infiltrated cell after cell. If normal cells are exposed to those containing misshapen SOD1, their own versions soon change and clump together. Once this process starts, there’s no stopping it, even if the original mutant versions of SOD1 disappear. The clumps are very stable. They can split into fragments and when the infected cells divide in two, the SOD1 clusters can pass on to daughter cells just as prions can. They can even hop from one cell to another to seed new gatherings of distorted SOD1. Charles Weissmann, who studies prions, agrees that SOD1 shows some prion-like properties. But he also says, “[A] prion is defined as an infectious agent, which means that it can transmit disease from one individual to another. This property has not been demonstrated for any other than the PrP-based prions.” Indeed, Anne Bertolotti, who led the new study, wants to assure people with ALS that the disease can’t be passed on from one person to another. “The mutant protein, once aggregated, is released from affected cells and infects healthy cells. But this doesn’t happen between individuals.” Why not? It might have something to do with how tough the protein in question is. Lary Walker, who studies neuron diseases at Emory University, says, “Mammalian prions are particularly hardy. They are difficult to destroy by conventional means, and this toughness may, in part, explain their unusual ability to transmit disease laterally between organisms.” SOD1, it seems, doesn’t share the same stamina. Nor do we know how good it is at killing cells. Stefan Marklund at Umea University points out that cells containing the SOD1 clusters were still alive after a month. The spread of SOD1 might seem quite sinister but Bertolotti thinks it exposes a weakness that scientists could exploit to produce better treatments for ALS. SOD1 spreads from “infected” cells to normal ones through the space between the cells, rather than through direct contact between neighbours. In those moments, the protein is exposed and vulnerable. “We can think of ways to capture SOD1 with antibodies, when it’s outside the cells,” says Bertolotti. Walker agrees, citing the potential to “to intercept the corruptive seeds in transit.” ALS and prion diseases are just some of the many brain diseases that are caused by misshapen proteins that gather together in clumps. These doppelgangers are also implicated in Parkinson’s disease, Alzheimer’s disease, Huntington’s disease and more. Bertolotti says that her study is the first to conclusively show that a protein other than prions can “infect” normal proteins with their twisted shapes. But other teams have come very close. Patrik Brundin found that clumps of alpha-synuclein –a protein involved in Parkinson’s disease – can spread from affected parts of the brain to unaffected neurons that had been freshly transplanted (although not very often). Marc Diamond found that clusters of misfolded Tau –a protein implicated in Alzheimer’s disease – can enter new cells and spread their twisted shapes to Tau proteins within them. And Walker, together with Mathias Jucker, managed to instigate clusters of amyloid-beta (also involved in Alzheimer’s) in the brains of mice by injecting them with diseased tissues from humans. Munch’s study may be the most thorough so far, but it could be just the tip of the iceberg. Reference: Munch, O’Brien & Bertolotti. 2011. Prion-like propagation of mutant superoxide dismutase-1 misfolding in neuronal cells. PNAS http://dx.doi.org/10.1073/pnas.1017275108More on prions: