Alzheimer's disease is the most common form of dementia in the world, affecting more than 26 million people. Creutzfeld-Jacob disease (CJD), another affliction is far less common, but both conditions share many of the same qualities. They are fatal within a few years of diagnosis, they are incurable and they involved the crippling degeneration of the brain's neurons. Now, a group of Yale researchers have discovered that the two diseases are also linked by a pair of critical proteins.

Look into the brain of someone with Alzheimer's disease and you will see large, insoluble "plaques" sitting between nerve cells. They consist of a protein fragment (or "peptide") called amyloid-beta, accumulating in its thousands. These plaques are a hallmark of the disease, but even before they have formed, amyloid-beta peptides have already begun to cluster in small soluble groups. Even at this stage, they can impair memory, degrading the connections between separate neurons.

Juha Lauren wanted to work out how exactly clusters of amyloid-beta wreak havoc in neurons before they form plaques. In particular, he was after the identity of its molecular accomplices. Many proteins work their will in a cell by attaching to other proteins called receptors. To see if amyloid-beta does the same, Lauren's team went fishing for receptors.

They created a synthetic version of the amyloid-beta peptide and connected it to a molecule called biotin - these were their hooks. Lauren lowered them into a massive pool of different proteins found in the brains of mice; if one of those was a receptor for amyloid-beta, it should take the bait and stick to it. As a rod, he used beads covered in a molecule called avidin, which sticks very strongly to biotin. The beads attracted biotin, which was stuck to amyloid-beta, which was in turn bound to its receptor.

From hundreds of thousands of proteins, their fishing trips pulled out just one that stuck to amyloid-beta, and it's a familiar one - the prion protein. Incorrectly folded versions of this protein (PrP^SC) are the culprits behind diseases like CJD, mad cow disease and scrapie. And now it seems that the normal, correctly folded version (PrP^C) plays a role in Alzheimer's disease too, by acting as the receptor for amyloid-beta. It's the accomplice through which amyloid-beta clusters work their damaging effects on neurons.

Lauren established that their partnership hinges on a set of just 16 amino acids in the middle of the prion protein. He systematically cut chunks of the protein away and found that when he deleted this one region (amino acids 95-110), he slashed the protein's affinity for amyloid-beta by 80%. To confirm the importance of these amino acids, he used an antibody that was specifically designed to stick to them. The idea was to cover the region so that amyloid-beta could no longer recognise its partner. It worked. Blocking these amino acids stopped the two partners from cavorting.

The link between these two proteins - key players in two different, fatal brain diseases - is exciting enough. But the big question is whether this partnership plays a role in the neural degeneration that accompanies Alzheimer's. Lauren showed that it does.

Previous studies have shown that amyloid-beta clusters can interfere with an important process called long-term potentiation or LTP, where the communication between two neurons are strengthened when they are stimulated at the same time. This process may be the foundation of both learning and long-term memory. Since Alzheimer's patients struggle with both these abilities, it's perhaps no surprise that amyloid-beta blocks long-term potentiation. When two neurons are stimulated together, the connection between them strengthens by a far smaller extent if these clusters are around. 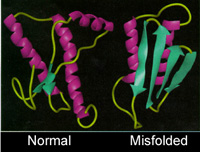 But this doesn't happen if the prion protein is missing. When Lauren looked at the brains of mice that completely lacked this vital receptor, he saw that LTP wasn't affected by the amyloid-beta clusters. This study clearly shows that without its prion partner, amyloid-beta's ruinous potential is severely restrained. The prion protein is obviously not its only receptor, but it's clearly the most important one and now, it's a target for scientists trying to find ways of treating Alzheimer's disease.

There's a lot of potential here. We already know a fair bit about the prion protein. Lauren has discovered which specific part of it is necessary for contact with amyloid-beta. And we know that mice that lack the prion protein entirely seem to be perfectly normal, which hopefully means that knocking it out will have few in the way of unwanted side effects.

Obviously, a few important questions remain. For example, we know that amyloid-beta and the prion protein need to interact with each other to interfere with LTP, but not how they do it. Perhaps the prion protein act as a "Trojan horse", shuttling amyloid-beta peptides into neurons and the vulnerable compartments within them.

Alternatively, the duo could work through a third accomplice that interacts with the prion protein, and there's already a plausible candidate - the tau protein, another major player in Alzheimer's disease. Patients usually have large tangles of tau in their neurons, which destroy the cells' lines of transport and prevent them from shuttling proteins and other chemicals from one end to the other. Last year, a group of Chinese scientists found that tau also associates with the prion protein, and perhaps these interactions are also an important part of the damage wreaked by amyloid-beta.

Finally, the prion protein, or at least its misfolded version, is infamous for its role in the group of diseases called "transmissible spongiform encephalopathies", including BSE and CJD. Its role in Alzheimer's disease seems to be unrelated to this misfolded miscreant, but in a related editorial, another pair of scientists suggest the possibility that prion proteins may change into their incorrectly folded guises when amyloid-beta binds to them. That prospect needs to be tested.