Deer transmit prion proteins to one another via their droppings

Prions are proteins that have become bent out of shape. Their chain of amino acids folds up in an abnormal ways, and they can transmit this rogue alignment to their normal counterparts. As their numbers increase, they gather in large clumps that can kill neurons and damage brains. They most famously cause BSE in cows, CJD in humans and scrapie in sheep. But other mammals suffer from prion diseases too - the deer equivalent is called chronic wasting disease or CWD and it is shedding light on how prions are transmitted in the wild.

Gultekin Tamguney from the University of California, San Francisco, has found that even infected deer are contagious even when they are apparently healthy and show no outward symptoms. Their faeces are bursting with prions, and through these infectious dollops, deer effectively seed their environment with sources of contagion.

CWD can be very common in both wild and captive deer, and its quick spread suggests that individuals must be able to pass on infections from one to another, probably via their environment. Scientists have suggested that faeces could act as a vehicle for prions, but so far, no one had ever shown that. 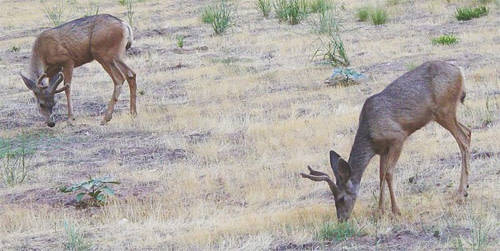 To do that, Tamguney spent one to two years collecting samples of faeces from five mule deer that had been infected with CWD prions. They liquefied these samples and exposed them to brief doses of radiation that would kill off any bacteria and viruses, but leave prions unharmed. They then injected the liquid into the brains of mice (the prion protein differs by just one amino acid between mice and deer, and proteins from one species can successfully infect the other).

Samples that were taken from uninfected deer didn't cause the mice any harm. But those that were taken 4-5 months after the deer became infected successfully transmitted the disease to 29% of the mice. By directly searching for the prion proteins, and looking at the infected brains under the microscope, Tamguney confirmed that these prions collected from the droppings of deer could infect fresh brains.

At 4-5 months, the deer aren't showing any visible signs of the prions building up in their brains. They won't start showing symptoms for another year or so, but during this time, they are continuously shedding infectious proteins into their environment, every time they relieve themselves. Over the course of its remaining lifetime, Tamguney estimates that a deer could shed as many prions in its faeces as accumulate in its brain by the time of its death.

The amount of prions in any one pile of droppings would be fairly low, but it's such a regular source of contagion that deer could potentially come into contact with several "doses". Transmission is even easier when you consider that mule deer eat small amounts of soil every day, for the important minerals it contains. But some mouthfuls contain not just minerals, but prions too. In fact, coming into contact with soil particles actually makes it easier for these rogue proteins to infect animals that accidentally lick contaminated ground.