Evolution without genes - prions can evolve and adapt too

If you search for decent definitions of evolution, the chances are that you'll see genes mentioned somewhere. The American Heritage Dictionary talks about natural selection acting on "genetic variation", Wikipedia discusses "change in the genetic material of a population... through successive generations", and TalkOrigins talks about changes that are inherited "via the genetic material". But, as the Year of Darwin draws to a close, a new study suggests that all of these definitions are too narrow. 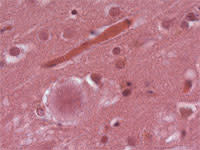 Jiali Li from the Scripps Institute in Florida has found that prions - the infectious proteins behind mad cow disease, CJD and kuru - are capable of Darwinian evolution, all without a single strand of DNA or its sister molecule RNA.

Prions are rogue version of a protein called PrP. Like all proteins, they are made up of chains of amino acids that fold into a complex three-dimensional structure. Prions are versions of PrP that have folded incorrectly and this misfolded form, called PrP^Sc, is social, evangelical and murderous. It converts normal prion proteins into a likeness of its abnormal self, and it rapidly gathers together in large clumps that damage and kill surrounding tissues.

Li has found that variation can creep into populations of initially identical prions. Their amino acid sequence stays the same but their already abnormal structures become increasingly twisted. These "mutant" forms have varying degrees of success in different environments. Some do well in brain tissue; others thrive in other types of cell. In each case, natural selection culls the least successful ones. The survivors pass on their structure to the "next generation", by altering the folds of normal prion proteins.

This process follows the principles of Darwinian evolution, the same principles that shape the genetic material of viruses, bacteria and other living things. In DNA, mutations manifest as changes in the bases that line the famous double helix. In prions, mutations are essentially different styles of molecular origami. In both cases, they are selectively inherited and they can lead to adaptations such as drug resistance. In prions, it happens in the absence of any genetic material.

If prions can evolve, and if they can show the same sort of adaptive resistance as bacteria or fungi, does this mean that they are alive? Charles Weissman, who heads up Li's lab, doesn't think so on the grounds that prions are completely dependent on their hosts for reproduction. They need normal proteins that are encoded within the genome of their host to make more copies of themselves.. He says, "The remarkable finding that prions can mutate and adapt to their environment imbues them with a further attribute of living things, without however elevating them to the status of being 'alive'."

There are many distinct strains of prion. Each is a version of PrP^Sc folded in a subtly different way, and new strains canarise out of the blue. Working out their exact structure has been difficult and they're usually characterised by the symptoms and disease they cause, and how long it takes for these to become apparent.

Li found that prions taken from brain tissue are different to those grown in cells cultured in a laboratory. The brain-adapted prions are capable of infected nerve tissue and they're resistant to a drug called swainsonine (swa) that completely blocks the growth of other strains. The cell-adapted prions lack both these abilities but they're better at growing in cell cultures.

When Li transferred brain prions into cell cultures, she found that they gradually adapted to their new environment. By the 12^th 'generation', they were indistinguishable from cell-adapted prions. They had lost their ability to infect nerve tissue in favour of the ability to grow faster in cultured cells. When Li returned these prions back to brain tissue, the brain-adapted forms once again rose to dominance.

Li also found that prions are capable to evolving resistance to drugs. She treated the cell-prions with swa. At first, the drug blitzed the prion population, slashing the proportion of infected cells by five times from 35% to 7%. But the rogue proteins staged a resurgence, bouncing back to infect around 25% of the cells. After just two rounds of growth, prions from cells that were exposed to swa completely resisted the drug. If the drug was removed, they faded into the background once more as the non-resistant forms took over again.

Further experiments showed that the resistant strains were already there in the population. But their slower growth rates mean that they're typically in the minority, accounting for just 1 in 200 prions. When swa blasted the population, these resistant few rose to dominance. Li says that prion populations consist of a multitude of strains and substrains, all of which are different ways of folding the same sequence of amino acids. Evolutionary pressures from the environment determine which of these strains is in power.

But mutants can arise out of the blue too. Even if a population consists entirely of the same strain (which you can set up through cloning), resistant or sensitive mutants develop spontaneously in a very short span of time. Prions, it seems, are very quick to adapt.

The fact that prions can evolve drug resistance so quickly is important news for scientists trying to find new treatments for prion diseases, such as Creutzfeld-Jacob Disease (CJD) and bovine spongiform encephalitis (BSE). Rather than trying to target the abnormal proteins themselves, it might be better to reduce the levels of the production of the normal PrP in the first place. The former tactic could be easily thwarted by the rise of resistant strains, while the latter tactic denies natural selection of raw materials to work with.