The mighty insect colonies of ants, termites and bees have been described as superorganisms. Through the concerted action of many bodies working towards a common goal, they can achieve great feats of architecture, agriculture and warfare that individual insects cannot. 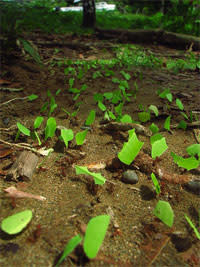 That's more than just an evocative metaphor. Chen Hou from Arizona State University has found that the same mathematical principles govern the lives of insect colonies and individual animals. You could predict how quickly an individual insect grows or burn food, how much effort it puts into reproduction and how long it lives by plugging its body weight into a simple formula. That same formula works for insect colonies too, if you treat their members as a collective whole.

Life is fundamentally about the use of energy, about effectively harvesting it from food and channelling it into existence and offspring. As animals get bigger, their changing use of energy ripples across all aspects of their lives. Because of economies of scale, larger and more complex animals need less energy for each individual cell. They grow and reproduce more slowly and they live longer.

The astounding thing is that this variety can be captured by a deceptively simple equation. An animal's metabolic rate is proportional to its mass to the power of three-quarters (0.75). So a cat that is 100 times heavier than a mouse would have a metabolic rate that was around 32 times greater, and a human that is 10 times heavier than a cat would have a metabolic rate around 6 times greater. This beautiful three-quarters "power law" links all animals from mice to elephants.

Hou showed that it applies to insect colonies. He gathered data on over 168 species of social insects and noted the total mass of all their members. They ranged from species of fire ants whose colonies weigh little more than 2 milligrams, to African termite colonies that tip the scales at around 4kg.

Hou showed that the metabolic rate of these species is proportional to their mass to the power of 0.81. It's close enough to the 0.75 figure as to be statistically indistinguishable. You can see on the graph below that the trend for the colonies is just an extension of the trend for loners. 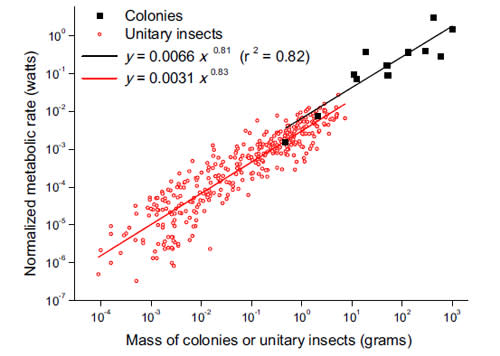 The same number applies to how quickly the colony grows, and how much effort it puts into reproduction. For individual animals, the same 0.75 power law links the mass of their sex organs with the mass of the rest of their bodies. For colonies, the queens are essentially the sex organs and the workers are the "rest of the bodies" - plug in their masses and the magic number is 0.65, lower than expected but at least within the right ballpark.

Finally, Hou also showed that the life spans of both colonies and individual insects are also related to their mass, this time to the power of a quarter. However, if you take a colony and an individual of the same mass, the chances are the colony will live for around 4-5 times longer. It's not clear why this happens but it certainly suggested that for insects, a social life is a longer one.

In any case, the striking parallels in Hou's study shows that the life of a superorganism is lorded over by the same numbers that governs the life of a solitary insect. This could help to explain why these insect societies are so successful. They are incredibly efficient engines of existence, with lesser energy demands per head and longer lives.