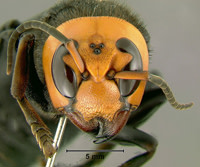 Rising temperatures and high carbon dioxide emissions are the means through which humans are inadvertently causing the decline of several species. But one animal actively uses both heat and carbon dioxide as murderous weapons - the unassuming honeybee.

With their stings and numbers, bees already seem to be well-defended but they are completely outgunned by giant hornets (right). These two-inch long monsters are three times longer than several times heavier than tiny honeybees and raiding parties can decimate entire hives. European bees mount little in the way of an effective defence, but Japanese bees aren't so helpless. When their hives are invaded, they launch a mass counterattack. 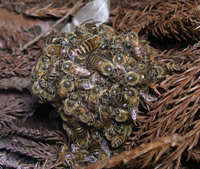 Swarms of workers dogpile the hornet, pinning it down while vibrating their wing muscles. At the centre of this "heatball", the frenetic buzzing heats up the hornet to a roasting 45 degrees Celsius.

Scientists have long thought that this manoeuvre bakes the hornet alive, for the bees that surround it are more resistant to high temperatures. But Michio Sugahara and Fumio Sakamoto from Kyoto Gakuen University have found that this isn't the whole story.

They noted that heat-balls kill hornets in a mere ten minutes, but hornets will happily sit in a hotter 47C incubator for longer than that. To find out how the bees were actually killing their foes, the duo captured and anaesthetised giant hornets and taped them to the end of either a thermometer probe or a gas detector. Ignominiously restrained, the hornet was brought towards the hive and immediately surrounded.

Ten minutes later, and all the hornets were dead. Four were actually removed within four minutes and while three survived, they were in critical condition. As others have noted, the temperature within the buzzing throng rose to 46 degrees within five minutes. But Sugahara and Sakamoto also found that the concentration of carbon dioxide within the tight ball of bees was a whopping 3.6%, around 5 times higher than the levels around a typical hive and 100 times higher than levels in the atmosphere.

The presence of so much CO2 changes things for the hornet. In normal air, it takes temperatures of 47-48C to kill a hornet but when CO2 levels rise to 3.7%, that tolerance falls to 45-46C. This two degree gap is the difference between life and death for it puts the threshold of the hornet's heat tolerance within the temperature range of the heatball. The bees themselves are safe. Regardless of CO2 levels, they can withstand temperatures of 50-51C but when carbon dioxide levels are high, hornets just can't take the heat.

The buzzing defenders generally produce the most heat and carbon dioxide within the first five minutes of heatballing. Sugahara and Sakamoto suggest that it may only take this long to vanquish the hornet, and the rest of the 10-minute slot is "free running to ensure their victim's death".

More on bees: Come back in a few hours and I'll repost and old article I wrote about a different variation on the heatball defence.

Images by Gary Alpert and Takahashi

Planet EarthWhy Do So Many Weird Animals Live in Australia?
Recommendations From Our Store