Giant bees do Mexican waves to ward off wasps

The forests of east Asia are home to giant honeybees. Each one is about an inch in length and together, they can build nests that measure a few metres across. The bees have an aggressive temperament and a reputation for being among the most dangerous of stinging insects. Within mere seconds, they can mobilise a swarm of aggressive defenders to repel marauding birds or mammals. But against wasps, they use a subtler and altogether more surprising defence - they do a Mexican wave.

Wasps, and hornets in particular, are major predators of bees and the largest ones can make even the giant bees look puny. Some invade hives and steal grubs, while others swoop in and pluck loitering bees from the surface of the colony - a technique known as "bee-hawking". The giant bees are particularly vulnerable to this strategy because their nests are open and typically covered in a blanket of workers. They might seem easy pickings for a hungry hornet, but the workers have a trick up their abdomens.

When hornets approach, individual workers raise their rear-ends by ninety degrees and shake them in unison. Nearby workers start doing the same and the result is a ripple of booty-shaking that passes over the surface of the hive. The technical term for the behaviour is "shimmering", but it could be described equally well as a "Mexican moon". Either way, it is mesmerizingly beautiful to watch.

For years, naturalists have assumed that shimmering is an anti-hornet measure but Gerald Kastberger from the University of Graz in Austria has provided the first conclusive proof of this. Together with Evelyn Schmelzer and Ilse Kranner, Kastberger video-taped and meticulously analysed the behaviour of two colonies of giant bees, nesting at a pair of water towers in Nepal. For them, the study is the culmination of 15 years of observing giant bees in the wild, over the course of many expeditions to India and Nepal.

Their videos revealed that there were two types of shimmering - small-scale waves where fewer than 10 bees take part, and large-scale ones which repeatedly spread over the entire surface of the nest and involved hundreds of individuals. The smaller variety were a regular occurrence, but the larger waves only ever happened when wasps were around and became stronger and more frequent if the wasps posed a large threat.

More and more individuals joined in the nearer the hornets drew to the nest and the faster they flew towards it, resulting in a defensive zone about 50cm around the nest in all directions. Hornets could happily hover outside this zone but if they crossed it, the bees would start waving strongly. And that had a clear effect on the predators. The moment the shimmering began the hornets halted their attacks and fled, and the more bees that took part, the faster the hornets retreated. To be fair, if hundreds of angry giants with spears on their rear-ends decided to moon me, I'd probably scarper too.

You can actually watch this happen in this action sequence. A bee in the middle of the shot is chased by a hornet flying in from the bottom of the screen. The bee makes a, erm..., bee-line for the nest and the hornet follows it only to be put off by the shimmering. This video shows the same scene but highlights the positions of the players.

The shimmers had different effects depending on their size; small-scale ones confused the hornets and caused them to veer wildly off course while big-scale waves seemed to irritate them and forced them to briefly accelerate. Either way, the hornets missed the part of the colony that they were aiming for. How it works isn't clear but Kastberger thinks that the small-scale waves make it difficult for the hornets to focus on any one bee, while the big-scale ones actually threaten them. The wavefronts tend to stay behind the wasps and they might actually drive them away from the their original targeted landing site. 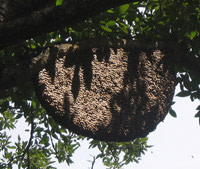 Most species of bees avoid wasps and hornets by nesting in nooks and crannies, but nesting out in the open has forced the giant bees to evolve other defensive strategies. Interestingly, it seems that the bees use different standards for different predators. Fifty centimetres is apparently enough of a distance for hornets but birds warrant action at much greater distances. In one experiment, giant bees released hundreds of defenders when a kite (the bird of prey, not the toy) appeared about 20 metres away.

When it comes to wasps and hornets, the giant bees use a tactic called "heat-balling" if any invaders actually manage to land on the nest. A gang of bees seizes and envelops the intruder and starts vibrating their wing muscles. The energetic buzzing heat the bees' bodies to 45C, a temperature that is harmless to them but lethal to wasps. The bees use their wings to literally cook the intruder (and some species can even use the same pile-ons to choke wasps to death).

But in many ways, the shimmering Mexican waves are a much better defensive option. For a start, they're energetically cheap - it takes a lot of effort to mob or heat-ball a hornet, but very little to raise your bum in the air for a split-second. Shimmering is also risk-free. By mooning the hornets away, defenders never actually have to engage with foes that are more powerful than they are.

The bees even signal to each other to hold formation. After a few ripples, shimmering workers release a chemical called Nasonov pheromone from a gland on their abdomens. The smell is a message to other bees and its says, "Stay together". It stops guard bees from breaking ranks and flying off to tackle the hornets themselves.

Mexican waves might seem like an odd defence but there's no denying their effectiveness. Kastberger says that in 30 minutes of observation and hundreds of attempted attacks by the hornets, he had never seen them take a bee from the nest's surface. Only when the bees left for foraging flights did the hornets successfully catch them in mid-air.