Leafcutter ants rely on bacteria to fertilise their fungus gardens 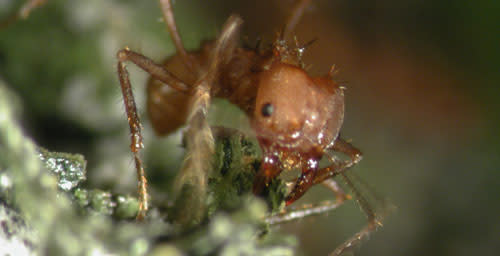 Hardly a natural history documentary goes by without some mention of leafcutter ants. So overexposed are these critters that I strongly suspect they're holding David Attenborough's relatives to ransom somewhere. But there is good reason for their fame - these charismatic insects are incredibly successful because of their skill as gardeners.

As their name suggests, the 41 species of leafcutter ants slice up leaves and carry them back to their nests in long columns of red and green. They don't eat the leaves - they use them to grow a fungus, and it's this crop that they feed on. It's an old, successful alliance and the largest leafcutter colonies redefine the concept of a "super-organism". They include over 8 million individuals, span more than 20 cubic metres and harvest more than 240 kg of leaves every year. They're technically plant-eaters, with the fungus acting as the super-organism's external gut. 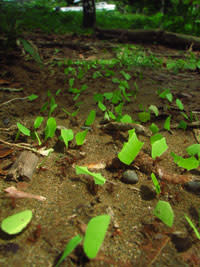 But the partnership between ant and fungus depends on other collaborators - bacteria. Some of these microbes help the ants to fertilise their gardens with valuable nitrogen, by capturing it from the atmosphere (a process known as "fixing"). Adrian Pinto-Tomas from the University of Wisconsin-Madison managed to isolate strains of these "nitrogen-fixing bacteria" from the gardens of 80 leafcutter colonies, throughout South and Central America.

Nitrogen is a scarce commodity for leafcutters, and the leaves they cut have too little of this vital element. And yet, they clearly get it from somewhere. The exhausted leaves they chuck into their refuse piles have higher proportions of nitrogen than those in the gardens, which have higher proportions than those that are freshly harvested or in the local leaf litter. Somewhere along the way, the cut leaves become enriched with nitrogen.

To find out how, Pinto-Tomas searched captive colonies of leafcutters for telltale signs of nitrogen-fixing bacteria. These microbes extract nitrogen from the air using an enzyme called, appropriately enough, nitrogenase. The enzyme also speeds up other chemical reactions, including converting acetylene into methane. So the fate of acetylene reveals the presence of nitrogenase, which in turn reveals the presence of nitrogen-fixing bacteria.

And that's exactly what happened - the test showed that nitrogenase was present and active in the gardens of all the 8 leafcutter species that Pinto-Tomas analysed. The enzyme and the bacteria that wield it are particularly active in the centre of the fungus gardens and not at all on the ants themselves, or the leaves they cut. Around half of the garden's supply of nitrogen comes from these bacteria.

But finding the bacteria wasn't enough; Pinto-Tomas had to show that these microbes were actually beneficial partners rather than casual stowaways. He did that by sealing the colonies in airtight chambers and pumped in air containing a relatively rare form of nitrogen called nitrogen-15. He found that after a week, levels of this isotope had increased not just in the fungus, but the worker ants and their larvae too. 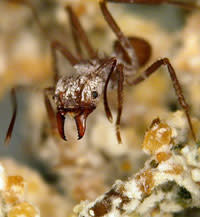 The ants were clearly reaping substantial rewards from their bacterial tenants. And by denying the ants access to soil or other food sources, Pinto-Tomas showed that they were indeed getting their nitrogen from these bacteria, and not from other sources.

This joint venture with fungi and bacteria must be a key part to the leafcutters' undeniable success. It makes them a super-herbivore. The ants don't fall prey to insecticides produced by plants because the fungus deals with those, and the fungus doesn't have to cope with anti-fungal countermeasures because the ants break those down before plying it with leaves. As a result, both partners can exploit a massive variety of different plants, rather than specialising one any one type. A lack of nitrogen is the big limiting factor, but the ants can clearly overcome that too, with some bacterial assistance.

The partnership is probably a boon to other plants too. The leaves that the ants discard have 26 times more nitrogen than the surrounding leaf litter and they fertilise the surrounding soil. It's no coincidence that the diversity of plants tends to skyrocket near a leafcutter garbage dump.

The nitrogen-fixers aren't the only bacteria that cement the alliance between ant and fungus. A decade ago, Cameron Currie, who was also involved in this study, showed that leafcutters use another type of fungus as a pesticide. Their gardens are plagued by a different species of virulent, parasitic fungus and to protect their monocultures from these weeds, the ants use a type of Streptomyces bacteria. It hitches a lift on the ants' shell and it secretes antibiotics that halt the growth of the parasite.

These insects really are gardeners par excellence, not only successfully growing a monoculture crop, they also use pesticides and fertilisers. Now if they'd only return David Attenborough's family...