Right from its entrance, Disneyland is designed to cast an illusion upon its visitors. The first area – Main Street – seems to stretch for miles towards the towering castle in the distance. All of this relies on visual trickery. The castle’s upper bricks and the upper levels of Main Street’s buildings are much smaller than their ground-level counterparts, making everything seem taller. The buildings are also angled towards the castle, which makes Main Street seem longer, building the anticipation of guests. These techniques are examples of forced perspective, a trick of the eye that makes objects seem bigger or smaller, further or closer than they actually are. These illusions were used by classical architects to make their buildings seem grander, by filmmakers to make humans look like hobbits, and by photographers to create amusing shots. But humans aren’t the only animals to use forced perspective. In the forests of Australia, the male great bowerbird uses the same illusions to woo his mate. Bowerbirds are relatives of crows and jays that live in Australian and New Guinea. To attract mates, males from each of the 20 or so species build an intricate structure called a bower, which he decorates with specially chosen objects. Some species favour blue trinkets; others collect a mishmash of flowers, fruits, insect shells and more. Surrounded by these knick-knacks, the artistic male performs an elaborate display; the female judges him on his skill as a performer, builder and decorator. The great bowerbird’s taste for interior design seems quite Spartan compared to his relatives. He creates an avenue of sticks leading up to a courtyard, decorated with gray and white objects, such as shells, bones and pebbles. The male performs in the courtyard while the female watches from the lined avenue. Her point of view is fixed and narrow, and according to Endler, the male knows how to exploit that. He found that the males place the largest objects towards the rear of the courtyard and the smallest objects in the front near the avenue. This creates forced perspective. From the female’s point of view, the bigger objects that are further away look to be the same size the smaller objects that are close by. If bowerbird vision is anything like humans, the courtyard as a whole looks smaller to a watching female, the opposite effect to the one that Disney visitors experience. There are many possible benefits to this illusion. Endler says, “The simplest hypothesis (and perhaps most likely) is that the more regular pattern on the court, as seen from the avenue, makes the male more conspicuous or easier to see”. Alternatively, by performing on an apparently smaller stage, the male could also make himself look relatively bigger to the female. “To my knowledge no other animals make constructions which produce perspective,” says Endler. By analysing 19 different bowers across Queensland, Endler showed that the arrangement of objects in the courtyards were far from random. When he messed up the careful gradients by reversing the large and small trinkets, the males were quick to put things right. Within three days, the illusions had been restored. Perspective has been a familiar element of Western art since the Renaissance, and Endler describes the great bowerbird’s courtyards as “bowerbird art”. Others would agree; in this clip David Attenborough compares the work of a Macgregor’s bowerbird to a sculpture by British artist Andy Goldsworthy and asks why one might be considered art and the other not. Defining art is a tricky business, but Endler thinks of it as one individual creating a visual pattern in the outside world to influence the behaviour of others. “Influencing behavior can range from attraction to and voluntary viewing of the art by others to viewers mating with the artist, which is what bowerbirds do,” he says. Artistic merit aside, Endler’s discovery also raises some important questions about the mental abilities of bowerbirds. The behaviour has only just been discovered and Endler says that he still needs to do the “critical experiments” to see how much brainpower the birds need to pull off their illusions. The most extreme explanation is that they have a sense of perspective (insert joke about humans here) and know that they should put small objects near the avenue and bigger objects further away. But Endler says, “The very simplest hypothesis is that the birds make the gradients by trial and error.” They spend around 80% of their time at the bower on moving objects within the courts, checking the view from the avenue, and moving things again. “They could just be doing that until the view of the court from inside the avenue looks ‘good’,” says Endler. “A slightly more complex behaviour might be needed if they had an inherited or learned decision rule which made them put smaller objects closer to the avenue entrance and increasingly larger objects further away.” Neither technique would be unexpected, given that bowerbirds are closely related to some of the smartest of all birds – crows, ravens, jays and their kin. Not all bowerbirds are equally skilled at setting up their illusions and Endler found that some males are much better than others in arranging objects in the right way. This variation might also benefit the female, providing her with an honest indicator of the male’s quality; after all, other bowerbirds get mating opportunities on the strength of their architectural displays. The males with the most even courtyards (from her perspective) could be better at arranging objects, and possibly mentally sharper. Alternatively, they might be better at stealing the right objects from other bowerbirds, at resisting such acts of thievery, or at choosing building sites with lots of varied objects to choose from. 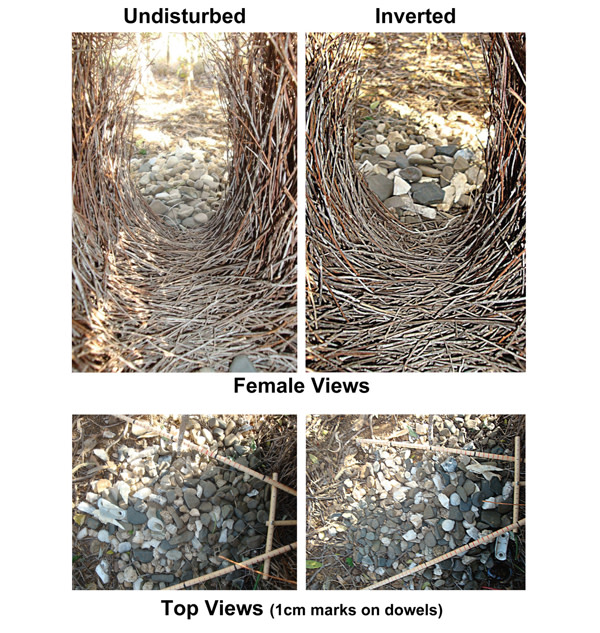