The 17th century royal shipwreck of the Gloucester has finally been found, thanks to a pair of Norfolk brothers. 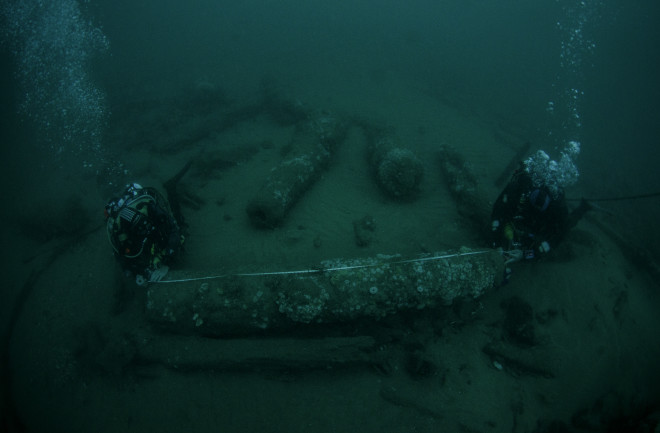 One of the most important shipwrecks of the 17th century has been found off the Norfolk coast in the U.K. thanks to two brothers. Julian and Lincoln Barnwell, local divers, have positively identified the shipwreck of the Gloucester, a royal vessel that struck a sandbank and sank in 1682.

After partnering with the University of East Anglia (UEA) and the Norfolk Museum Service, artifacts from the wreck will soon be on display for the public where they will aid in telling the fascinating story of the Gloucester and how this shipwreck nearly changed the course of British history.

(Credit:Johan Danckerts, 1682 Royal Museums Greenwich BHC3369/ Wikimedia Commons) The Wreck of the Gloucester off Yarmouth, 6 May 1682

Julian and Lincoln Barnwell have been diving and exploring shipwrecks for decades, especially World War II-era ships. It was Lincoln Barnwell who first decided to begin searching for the Gloucester after reading about it in his shipwreck encyclopedia.

"I suddenly saw one that sank in 1682, which was the Gloucester," Lincoln Barnwell says at a press conference. "I did some quick research and reading on it, saw the word [cannon] and thought 'fantastic, that's gotta be our mission to go and find.’"

The searching began in 2003 and after exploring nearly 5,000 nautical miles, they discovered a potential site in 2007. By 2012, experts positively identified the wreckage as the Gloucester.

It was Lincoln who first spotted the wreck, and the first thing he saw was a cannon.

How The Gloucester Almost Changed History

Though it is unknown how many people were aboard the Gloucester when it sank, some of its passengers had the power to change the world. The ship's most notable passenger was James Stuart, the Duke of York who would go on to be James the II of England and the VII of Scotland.

"If James Duke of York and heir to the throne had drowned," says Claire Jowitt, a UEA professor of early modern cultural history, at a press conference, "then it's very likely that Charles the II's illegitimate son, James Scott, Duke of Monmouth would have become king after his father died in 1865."

Jowitt went on to say that James the II's death would have also prevented the Monmouth uprising where Protestants rebelled against James as a Roman-Catholic king. Along with that, The Glorious Revolution, a relatively bloodless revolution and coup d'état where William and Mary — nephew and daughter to James — ascended the throne from him. This led to the English Bill of Rights and limited the powers the monarchy had.

How The Gloucester Did Change History

"James' behavior on the ship and afterwards likely changed how a number of powerful individuals thought about him," says Jowitt. James had been arguing with the crew over which route to take and whether or not they had passed the Norfolk sandbanks. It was James' route they were sailing when the ship struck a sandbank and began to fall apart. At that time, no one could leave a ship until royalty did.

"We don't know how many people died," Jowitt says. "But we think between 130 and 250 people lost their lives."

After the wreck, James did not take responsibility. He blamed and imprisoned the pilot of the ship instead. Higher ranking officers in the Royal Navy suspected that James may be involved in a coverup, causing concern over what would happen in the navy when James came to power.

After witnessing the Duke's actions, prominent figures such as John Churchill, changed their minds of James forever. Churchill was even a key figure in bringing in William and Mary to dethrone James.

Stories of The Gloucester

The artifacts that the Barnwell brothers recovered help tell the stories of those who lost their lives aboard the Gloucester. Because the ship sank so quickly, there was little time to rescue anything. Experts can now piece together the story of this historical ship and the importance it had in shaping the English navy.

Interesting enough, the story of the Gloucester is also centered around brothers. The sinking ship impacted the two brothers, Charles II and James II. Two brothers helped build the Gloucester. Brothers made the ship's bell, and the Barnwell brothers later discovered the ship.

"This is going to be Norfolk's Mary Rose," says General Lord Richard Dannatt, chair of the trust being set up for the Gloucester. The Mary Rose was a ship of King Henry VIII that was famously found and brought to the surface in the 1980s. The Mary Rose was an inspiration for the Barnwell brothers to begin their search for sunken ships, and they hope their discovery inspires another generation of explorers.

Artifacts from the Gloucester will be available to view at Norwich Castle Museum and Art Gallery in February 2023.